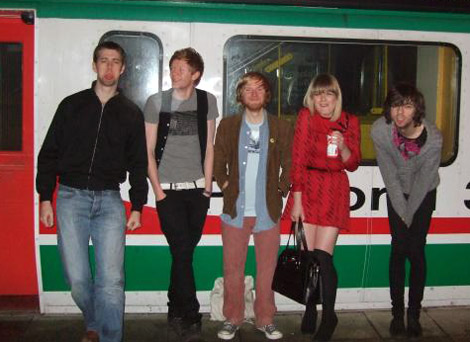 This Week – This Many Boyfriends, The Chakras Everything, Everything, Lana del Rey, Run Toto Run, MFlow

“I Should Be A Communist” By This Many Boyfriends

Culling their name from a Beat Happening song, Leeds-based quintet This Many Boyfriends nail their manifesto firmly to the wall within seconds of the opening song of their debut EP: “I Don’t Like You (‘Cos You Don’t Like The Pastels)” is a blatant slab of spot-on musical snobbery that’s been wowing the indiekids for a few months already.

But it’s not all knowing winks and in-jokes amongst the Anorak set. For example our song of the week here  “I Should Be A Communist” and “#1” are pure jangly pop, nudging on vintage Smiths and Orange Juice territory respectively. And “Three Year Itch” bangs the drum with it’s re-verb guitars and laconic vocals as effectively as any Brooklyn-based NME darlings you could care to mention. EP closer “It’s Lethal” raised the bar, both melodically and lyrically, leaving us with the delicious coda “Radio is The Devil”. A fitting end to an EP that politely puts two fingers up to the indie mainsteam.

You’ll probably not be surprised to discover This Many Boyfriends are playing at Indietracks festival this summer and, in grand indiepop tradition, the CD release of the EP comes with a fanzine and a badge/sticker set.

SONG OF THE WEEK 2

The Chakras release their début single, ‘Build Me A Swan’, through Flock Music on the 28th June 2010.

Everything Everything release their much anticipated new single ‘Schoolin” on June 14th.  Along with the single, the band have made a couple of amazing remixes available for you,YES YOU! I’m not sure about it myself, but its free..and I’m scouse.

You might recognise Lana del Rey already… perhaps from an old movie somewhere, but look closer and you might not. Lana del Rey is a young singer weaving cinematic  pop noir for the 21st Century- music  with her smoky, sultry languid  vocals she draws you into a world of pop noir marking her out as one to watch.  Born in the rural town of Lake Placid, New York, Lana then relocated to a series of places- Alabama, New Jersey and New York city, but now spends  most of her time in London. “No matter where in the world Lana is, her love of film noir, Italian landscapes, big churches, roller coasters and the memory of faded stars like Bette Davis, Kurt Cobain, Nina Simone and Elvis are the chorus line for her music, and her love of New York is her heartbeat.”

This marks her second offering from her collection of homemade videos she has made. Lana is currently in the studio writing her album.

Bowie’s publishers asked Run Toto Run if they wouldn’t mind covering a Bowie song, they said, course not, Bowie’s the best. They took it one step further and wanted to make a video to rival Sleepyhead for its stupid costumes. And here be the results…

will release their debut EP Holy Yell on 21st June, the result of a six-month mobile recording project across the South East of England.

Fanfare please,  because now we bring you news of a new music service which we’ve tried and found more addictive than a James Corden themed slap-o-meter. It’s called Mflow and is a bit like “iTunes meets Twitter” it enables music fans to share music they love and get credit for doing so (legally).

Mflow is a way of making or receiving music recommendations to people who you “follow”.  They could be mates, complete strangers, record labels, DJs, bloggers or anyone else.

Currently NME, Clash, PopJustice, ThisIsFakeDIY and us as well as lots other magazines / blogs have profiles on the site, recommending their favourite tracks.  There are also artists such as The Temper Trap, Florence & the Machine and Lauren Pritchard communicating directly with their network of followers and offering exclusive tracks and remixes.