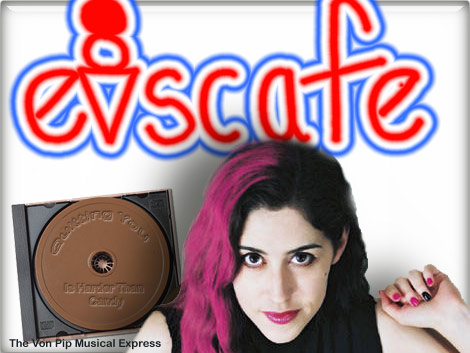 What do you do if you have 100’s of demos? Record them all and release an album every few weeks? Maybe release a single a week? Aug Stone tells us the inspiration behind his latest musical project EISCAFE and talks us through two of his collaborations (which can be downloaded above via Corporate Records on a free or  pay what you like basis)

AUG : The idea for Eiscafe came on December 20th, 2010 after I’d been going through all the musical ideas I’ve accumulated and jokingly posted on Facebook “Aug Stone is looking at his near 100 demos and thinking 10 albums in 2011?” Simon Drowner ( from Johnny Cola & The A Grades) suggested that I release a single a week.  I really liked the idea and a number of people offered to collaborate with lyrics and vocals, because these were all instrumental pieces. I’m still way behind but I’m really pleased with the songs so far, so however many it ends up being, I’m just glad some great music is getting made.  If anyone wants to try collaborating on a song, just get in touch.

“Quitting You Is Harder Than Candy” came about because this whole idea was suggested less than 2 weeks before the New Year. I sent a few demos out for people to write lyrics to and flew to the States for the holidays. On the plane to JFK I started getting more and more excited about the project. But I needed a song for the first week of January and it was highly unlikely anyone would’ve written one in the next few days. And suddenly I remembered this very Mary Chain song I had written in 2003 called “Quitting You Is Harder Than Candy” which I had always meant to record as a duet with Liz Enthusiasm from Freezepop but we had never gotten around to it.  The title was actually stolen from my friend Vanessa’s livejournal as it just seemed like such a great pop title.  I could only remember about half the lyrics so when I got to my parents’ house, I began rifling through the 3 fireproof safes where I keep all my old writing and master tapes. I’m terrified something will happen to them ; )  I found the lyrics and emailed Sean and Liz from Freezepop to see if they’d be interested in doing it.  (I used to play in Lifestyle with Sean, there’s 2 free albums up here, after I left the band, but they’re ace, I highly recommend listening to them (HERE) I had no way to record anything but Sean has a nice studio and is a recording wizz.  He’s also incredibly fast too as I was to discover!  We did the majority of it in an hour and a half as I was racing to get my parents’ car home from Boston before a blizzard hit, I made it just in time and we got 15 inches of snow that night.

Then there was a bit of a lull with people getting back to me with lyrics until one Friday, I was having quite a miserable day and David Barnett sent me over “Slag To Love” Which totally turned my day around!  I listened to it 10 times in a row and was really excited about it.  I had just sent him that riff and the chords and he came back with these brilliant lyrics and a very catchy tune.  And I had been there the night a friend of mine introduced him to the lady in question, so I knew and was there for the whole story that’s going on in the lyrics!”

2 thoughts on “Songs To Learn And Sing – Eiscafe.”