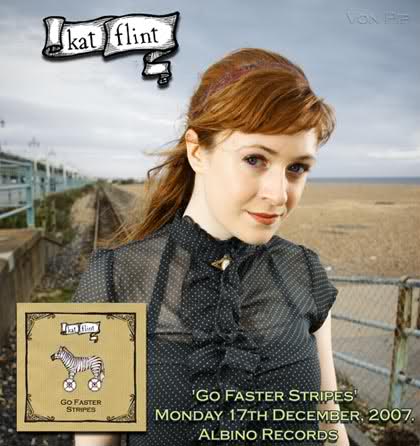 Okay, so we’ve all heard it before – hotly tipped young Scottish singer-songwriter with an acoustic guitar is going to be the next big thing – but with Kat Flint it’s going to be a serious miscarriage of musical justice if she isn’t. The first single from forthcoming album Dirty Birds (due for release in 2008 on Albino Records), ‘Go Faster Stripes’, is, as her press release informs us, “a tale of impatience, disasters and happy accidents”, which showcases three of the most appealing aspects of Kat’s music: her voice, her lyrics and her amazing musical talent. This is not your run-of-the-mill singer-songwriter.

The single is backed with ‘Joseph’, a song which tells the story of the Nativity through the eyes of (you guessed it) Joseph, presumably because of the festive release date of the single. Unfortunately, this single is never going to be Christmas number one, but it’s certainly not because it doesn’t deserve it. So make yourself a cup of hot chocolate, sit in front of an open fire with your feet up and download Kat’s single. You won’t regret it.