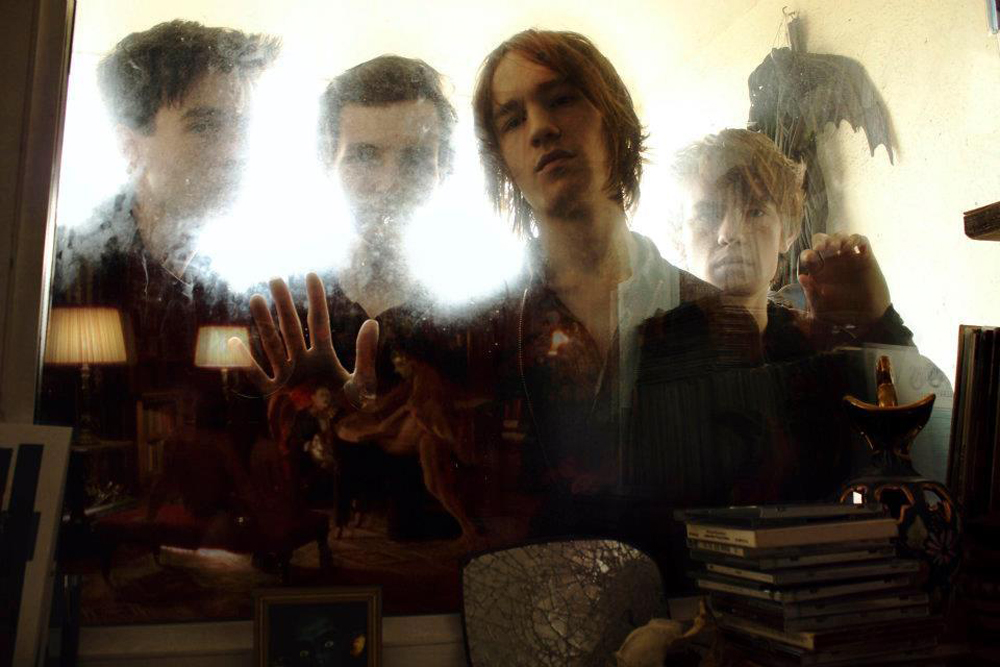 South-London quartet Filthy Boy stare at the current music scene through a haze of psychedelic bustle. A band noticeably enjoying what they do and doing it well, ignoring most of what surrounds them in terms of musical flow. From the first listen of their early demo, ‘Waiting On The Doorstep’, you can almost smell the influence of a mind-altering haze descending. Aged just nineteen-years, the band are under the stewardship of former Rough Trade guru James Endeacott – the man who signed The Libertines [ he was also in Loop !! – ed.)  and who now runs his own artist management company ‘Oh Mercy’. If that’s not impressive enough, Filthy Boy’s single ‘Naughty Corner’ has been released on a limited run on AED Records; the label ran by Edwyn Collins, a man so highly thought of in the music industry even Mark E. Smith let him take production duties.

Filthy Boy appear to have constructed  a fine musical platform from which to survey the spectacle around them, the question is do they have the tunes to carry them through?

Naughty Corner is a song swarming with a subtle wit and charm; the melody is delivered in a tone resembling Alex Kapranos’ as Paraic Morrissey’s narrative draw you in and allows the music to play out as a sinister soundtrack to the events that unfold. The placement of each guitar note from Harry Weskin’s lead is the songs harmonious centre fused with  palpitating  percussive rhythms  provided by the bass and drums produced by Michael Morrissey and Benjamin Deschamps. Although far from the noise rock of The Birthday Party,  there is a slight essence of Nick Cave stirring within these boys; a certain decree embedded within not to follow the crowds but to walk the line with astute assertiveness.

Music this evocative is definitely worthy of our praise and, from a band so young, P. Morrissey’s self-aware proclamation enraptures as he croons, “don’t you scowl, you’re old enough to know just how young you are by now”. Filthy Boy have arrived, fearless and gallant. They sound like a band that will always mark themselves on not what they think they should sound like – but most certainly and defiantly – Filthy Boy know what they sound like: psychedelic story-tellers with their own agenda.

Naughty Corner is out now on AED Records – http://aedrecords.com/shop.php?release=20

Previous Release ‘Waiting On The Doorstep’