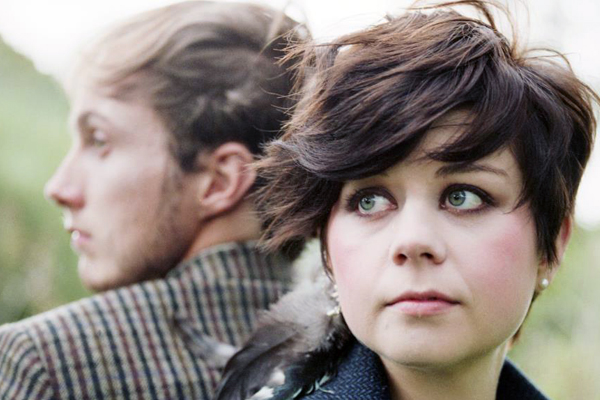 We have, we freely admit, used the term “folktronic” on a number of occasions and doubtless will do so again, but really, it’s so widely used and often without thought or rationalisation that its a term that’s almost lost its meaning. So from today we are banning the word on this blog.

Unfortunately when our ears were set a quiver by the majestic, lush, swoon-some beauty of  ” Always Golden” By Golden Fable , that vexatious phrase, “folktronic” danced once more across our mind like some sort of capricious nymph. But we grabbed it, we pinned it to the floor and in no uncertain terms roared (rather like Brian Glover in “American Werewolf”) –  “THAT’S ENOUGH!!”

And so instead of glibly labelling this beautiful song “folktronic” we’d prefer to look on it as a glittering, ethereal jewel, an aural map of the human heart if you will,  in which Rebecca’s celestial vocals seem to embrace your very soul in a way very few singers can manage.

Golden Fable are Tim McIver and Rebecca Palin formerly of  multi-instrumental cult group “Tim and Sam’s Tim and the Sam Band” they have already recorded an LP that is ready for release in this year and on the evidence of their soundcloud tracks it promises to be something very special indeed.

Also check out their lovely version of the Manics classic “Motorcycle Emptiness” too!

NB.  “Folktronic?” – I mentioned it once, but I think I got away with it all right. So! It’s all forgotten now, and let’s hear no more about it…so, that’s a rum and folk a gin and tronic and …

4 thoughts on “Track Of The Day – Golden Fable – “Always Golden””