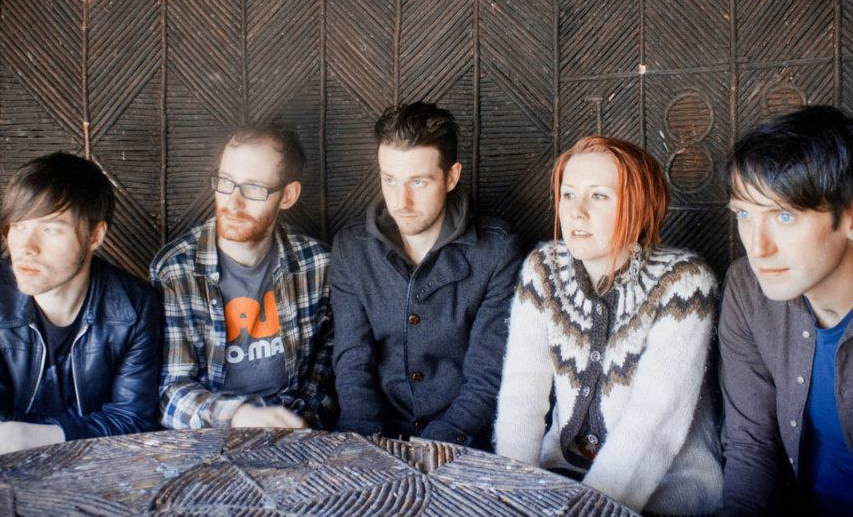 ‘Knots’ is something that the hapless Nick Clegg has been tying himself in this week after his grovelingly wretched apology which aimed at pathos but resulted in bathos  became  a hilarious internet meme.   ‘Knots’ is also the new single by Glaswegian band Olympic Swimmers and is to be released on the their own label Green White Violet on 8th October 2012.

Vocally it falls somewhere between Camera Obscura’s Tracyanne Campbell and ‘Allo Darlin’s Elizabeth Morris, yet never veers from empyrean towards the twee. It’s a genuinely marvellous song that somehow manages to turn potentially doom laden subject matter ‘ the passage of time, the importance of memory as we age, the fear of losing memories of joyful times, of losing people that we love” into something beautiful and uplifting.

The band formed in 2009 and consist of  Balamory sounding siblings Susie Smillie (vocals) and Graeme Smillie (bass, keyboard, vocals) plus Simon Liddell (guitar), Jamie Savage (guitar, keyboard) and Jonny Scott (drums, vocals) and released their debut album  ‘No Flags Will Fly’ earlier this the year.  ‘Knots’ is free to download up to the 8th Oct from band camp: http://olympicswimmers.bandcamp.com/

The single also includes a remix of another album track, the Liz Fraser hued ‘Where It Snows’ by highly tipped fellow Glaswegian producer Miaoux Miaoux

1 thought on “Track Of The Day – Olympic Swimmers – Knots”