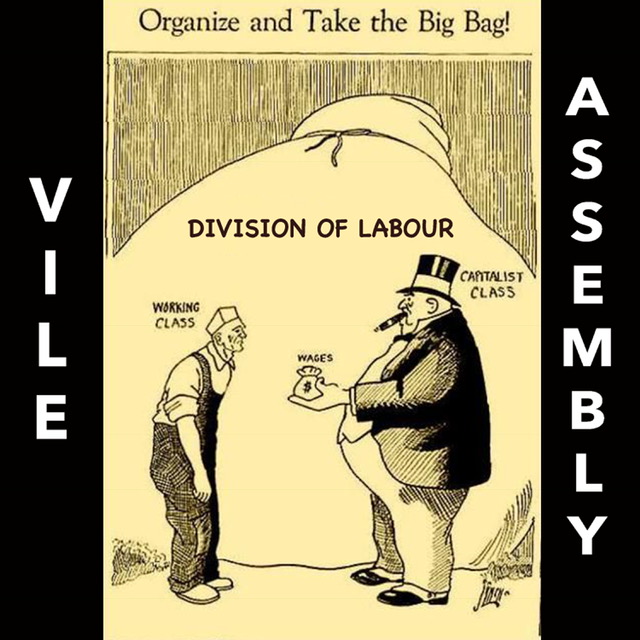 Well, we’ve had quite a diverse selection of music featured this week, and we’ll close for the weekend with some incendiary post-punk from Liverpool’s Vile Assembly with their explosive new track ‘Division Of Labour.’ We seriously did a double take upon first listen as the band’s singer and lyricist Paul Mason sounds like an absolute dead ringer for John Lydon, who in his prime could spit venom and fury like nobody else.

This is snarling visceral political punk as the track targets the rigged economic and political system, deliberately skewered to put profit over people, to quash dissent and to ensure workers have no voice as Mason explains “The song shines a light on the fact that corporations are in control of the country for their own gain, and the population of the country is there merely to fill the working roles needed to fulfill high-value contracts for poverty-inducing pay, however, there is hope that if the countries’ people unite against this corporate crime, we can regain control of the system and make it fair and equal,”

Vile Assembly comprises of Mark Wainwright (guitar, bass, keyboards), Mark Webb (guitar, keyboards, drums) and Paul Mason (lyrics, vocals) who run Alien Sound Recordings in Liverpool, but had never considered making music of their own until they decided that somebody needed to stand up and shout in the defence of those without a voice. The band was created solely to be the whistleblowers on an unjust society (we like whistleblowers, let’s just say we’ve tooted that particular instrument very fucking loudly in the past, often to our own detriment .) The band’s second album ‘Fattened By The Horrors Of War’ drops later this year, in the meantime, you can find the band via their social media channels below.