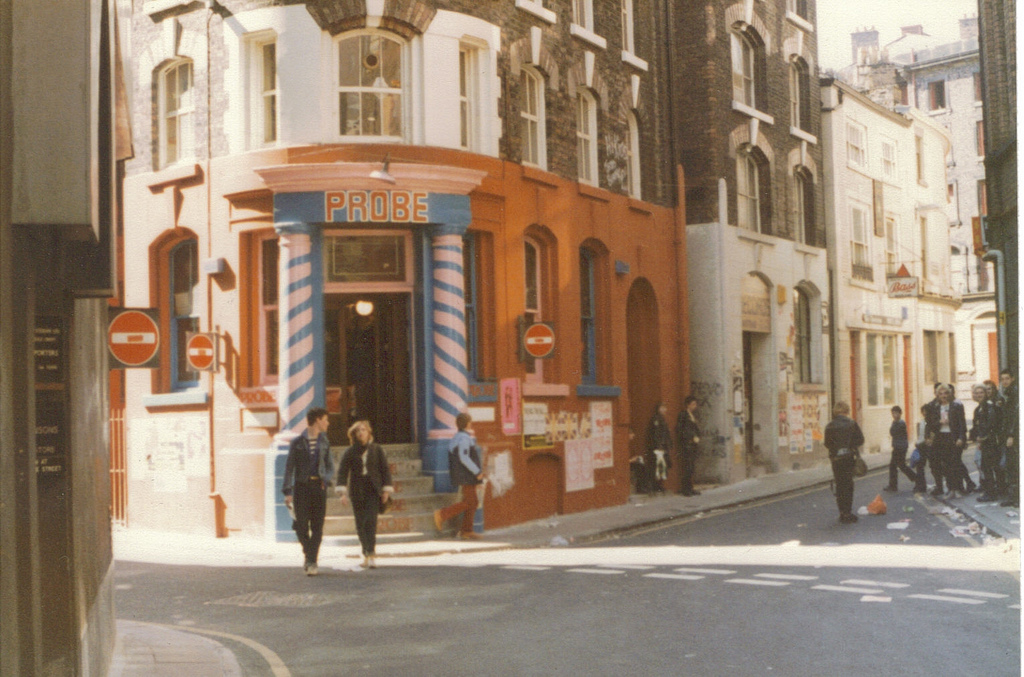 As it’s Record Store Day I thought I’d get all wistful and recall the olden days spent at my favourite Indie Record Store !

If you’re of a certain vintage you’ll doubtless recall those halcyon days when supermarkets sold food, Burtons supplied gentleman’s clothing and the best music was discovered via your local independent record stores.  As it should be.  These Record Stores were not the neutral homogeneous metrosexual Megastores we now have in our midst today. They were not owned by ‘big music’ their window displays did not promote the latest big label karaoke monstrosity, nor did their sound systems blast out the ear cancer that is N-Dubz.. These stores had soul, they were individual, edgy, dimly lit Aladdin’s Caves, rammed with all manner of weird and wonderful vinyl treasures. A place where the record enthusiast could lose track of time searching for obscure musical gems they’d doubtless heard on John Peel’s hugely influential radio show the previous evening.  The people who ran these stores where generally curmudgeonly individuals, a couple of olives short of a pizza, whose idea of customer service was to mock your musical taste (after of course pocketing your money). In actual fact they were also huge music fans, which meant they were not always necessarily the most astute of business men. A fact I’m sure, Geoff Davies the owner of my home town record shop would readily admit. Geoff  started Probe Records in Liverpool in the 70’s after becoming frustrated with regard to the lack of decent musical outlets in the area and in doing so created something far more  important than just a mere record shop. Probe Records became synonymous with the underground scene in Liverpool, drawing musicians, artists, poets, fans and lunatics into it’s hallowed walls.

By the time I’d discovered ‘proper’ music Probe was based in Button Street at the bottom of Matthew Street, way before the boom in Beatles Tourism infested the area like a mop topped plague. It was at the very heartbeat of Liverpool’s vibrant alternative culture.  You’d more than likely bump into folk like Pete Wylie, Ian McCulloch Julian Cope or Jayne Casey if you hung around Probe or the nearby Armadillo Tea Rooms long enough, as I often did. Admittedly Probe initially terrified me, it seemed to be populated and staffed by alien invaders from Planet Weird. But it had items of such beauty within, obscure imports, coloured vinyl, picture discs, badges, fanzines and T-shirts that resistance was futile, Christ even the shopping bags they popped your purchases in were works of art.  It genuinely did contain a veritable cornucopia of everything the alternative music fan could wish for, a secret world away from the mainstream and a home for the distressed, depressed and the fantastically dressed.

On one occasion my dear old mum took me into Liverpool City Centre in order to buy my birthday present, and although being spotted shopping with your Mother wasn’t generally considered cool, the promise of a new piece of vinyl was too much to resist.  WH Smiths, my mum’s first point of call had refused to stock the album upon which I’d set my heart on. It was not a new album by any means and I knew the only place in town that would stock it would be Probe Records. To my horror my mother steadfastly refused to furnish me with my birthday money and to wait, as I had hoped, in nearby cafe, instead she insisted on marching straight into Probe to ‘see the funny haircuts’   Thankfully the shop was almost deserted inhabited only by the most gorgeous gothy girl I’d ever seen and an inebriated punk with a rather splendid Mohican.  I loitered by the door, distancing myself from my mother ( hey I was an anarchist right?) but from my vantage point could maintain a cool aloofness whilst still being able to keep a watchful eye on the old dear as she hailed a member of staff  by rapping her brolly on the counter.

‘Young Lady, young lady, excuse me miss, do you have ‘The Bullocks’ please’, she shouted shrilly across the counter to the assistant who immediately span round (right round, somewhat like a record). The ‘young lady’ in question was none other than Mr. Pete Burns, glammed up to the nines replete with scary contact lenses.

‘Hello love,’ he replied ‘did you just ask- do I have bollocks?’

‘Yes it’s a gift  for my son, he says he’s a  Punk New Wafer these days, daft if you ask me-There he is  over there- Andrew, Andrew come here lad ‘… and yes I prayed the floor would swallow me up as my mother jabbered on ’What’s it called son ? ‘Minding Those Bullocks’ By Six Pistols?

I regularly visited Probe and Pete would often ask how my mum was before he went about berating customers musical choices-‘No idea why you’d wanna buy that shite mate’- ‘Oh My God now that is a total waste of  four pounds’etc, etc  –You see back in those days as Pete was well aware,  shit music wasn’t ironic or knowing (now marketed as ‘guilty pleasure pop’)– it was what it was- shit fucking music!  You just don’t get that sort of entertainment with I Tunes do you?  I loved Probe for many reasons, the social aspect, and the fact that their record label Probe Plus released my old mate  Nigel’s first album and has continued to support his music to this day.   It wasn’t just a record shop it was a place that fuelled my passion for music, it was outer space, and it was a place where I met some wonderfully weird and creative characters.

I do feel a twinge of regret that the local record store isn’t quite the focal point for youth culture it used to be and that some people appear to spend so much time amassing music via the Internet that one wonders if they have time to actually listen to it. Of course  the advantages the net brings far outweigh  any whimsical misty eyed nostalgic reverie about days gone by, but they were genuinely exciting times growing up, feeling part of a subculture that your parents, your boss and even some of your friends didn’t really understand.  It bonded you to the people and tied time and place to the music, you were part of the tribe and felt a sense of belonging, which, after all is something we are all looking for. It would be a fitting way to end this recollection by describing how I married the gorgeous gothy girl mentioned earlier. But I didn’t. However I did ask her out, her reply was so profound, so eloquent, that even today it moves me…’Fuck off you fucking big nob ‘ead’

Happily Probe Records is still going today having recently moved (again) to new premises at The Bluecoat on School Lane in Liverpool and any self respecting music fan who visits this fair city should call in,  after all you never know who might serve you!