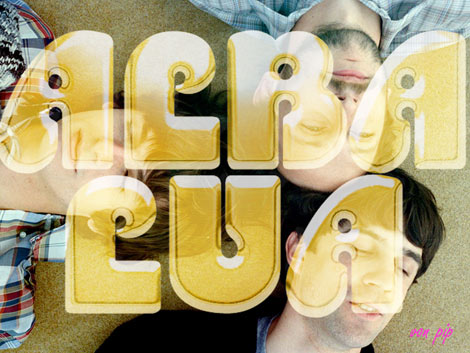 If a description along the lines of ‘sun fretted Gaelic shoegaze dream pop’ takes your fancy and tickles your dander than the chances are you will love Alba Lua’s début EP.  This eccentric French trio from Bordeaux have produced a sparkling hypnotic fusion of styles which shimmers with an ethereal, otherworldly beauty.

The first track on the EP, the melancholic “Ballad Of Joseph Merrick” deals with the inner turmoil and existential angst of the gentleman who’s ghastly visage and butter bean shaped noggin made him a celebrity in polite Victorian society.  ‘“I’m the Elephant Man…my head is bigger than yours,” ponders the songs accursed protagonist and although this may not exactly be the most insightful line ever written with regard to Mr. Merrick’s grotesquely misshapen head, unless you happen to be Jeremy Clarkeson, it’s definitely one of the most factual.  With hushed highly pitched vocals combined with a fuzzy wash of sound it all comes together rather beautifully and builds to an eminently satisfying climax.  Track two,  “Sunbathers” at times recalls ‘Spooky’ era Lush and the final and possibly best track on the EP “Valley of Abra” is a dreamy, intoxicating, psychedelic explosion.

We set about the task of finding out  more details with regard to this fascinating trio yet at the conclusion of our interview we found our overriding emotions were ones of perplexed bemusement. Maybe things were lost in translation, their English is certainly vastly superior to our French, and quite possibly sometimes music possesses an eloquence that is all of it’s own and quite impossible to capture with mere words. . . ah and what lovely music it is. . .

VP: How did you all meet up and what prompted you to form a band?


PEPO: We met on the west coast of France and we wanted to express our love for each other without talking.

VP: Your collective name Alba Lua ? What does it actually mean?

PEPO: It means moon of the dawn –‘lune de l’aube’. We’ve seen it on the beach next to the rising sun; it was as scary as it was beautiful and the birds were flying and crying.

VP: Joseph Merrick is a slightly strange subject for a song, what prompted you to write a song based on The Elephant Man?

PEPO: Joseph Merrick has always interested me for two reasons: firstly I empathized with his position in society (Do you face the public or hide from the public? The public are barbarians! ) and secondly I was fascinated by the way he viewed himself as a person. I love the way he finally accepts his differences and tries to live as full a life as possible.

VP: You all hail from Bordeaux in France, is there a vibrant music scene there at the moment?

PEPO: The three great bands we know are – Windy Morning , Mars Red Sky and Teenage Wet Dream ! You should come along!

VP: What sort of influences do you think have inspired your sound?

VP:  Have you played any UK shows yet and are there any planned in the near future?

PEPO: Yes we did man!!! It was awesome!!! Such a great experience!!! The UK was great but Holland was even better, big love to “ In Julia’s Mind Scene“!! But in the future we’ll go to the South, it’s where we belong.

VP:  OK. . . Is there a début album being readied?  If so when are you hoping to release it?

PEPO: We are thinking about it but we’re cursed so it will take a long time. But it’s obviously or ambition to release one.


VP:  Who would be your ideal touring partners and why?

PEPO: We’d like to tour with Simon and Garfunkel because they look very sweet and funny and they could raise our spirits by playing their songs in the middle of the morning. Of course our friends would also make ideal touring companions, Loan, Arthur, homies from “Auckr”, Antoine Brachet and Le Frisé from Bordeaux

VP:  Is new technology something you embrace? Do you have any gadgets you can’t live without or are there any you secretly covet?

PEPO: The less of an input from technology, the better we all are- technologically we are still in 1888!! However, Pascal wants a grand piano, Renoi wants to explore space, and I, Pepo want a new motorbike –

0 thoughts on “The Whole Of The Moon …Alba Lua interview”