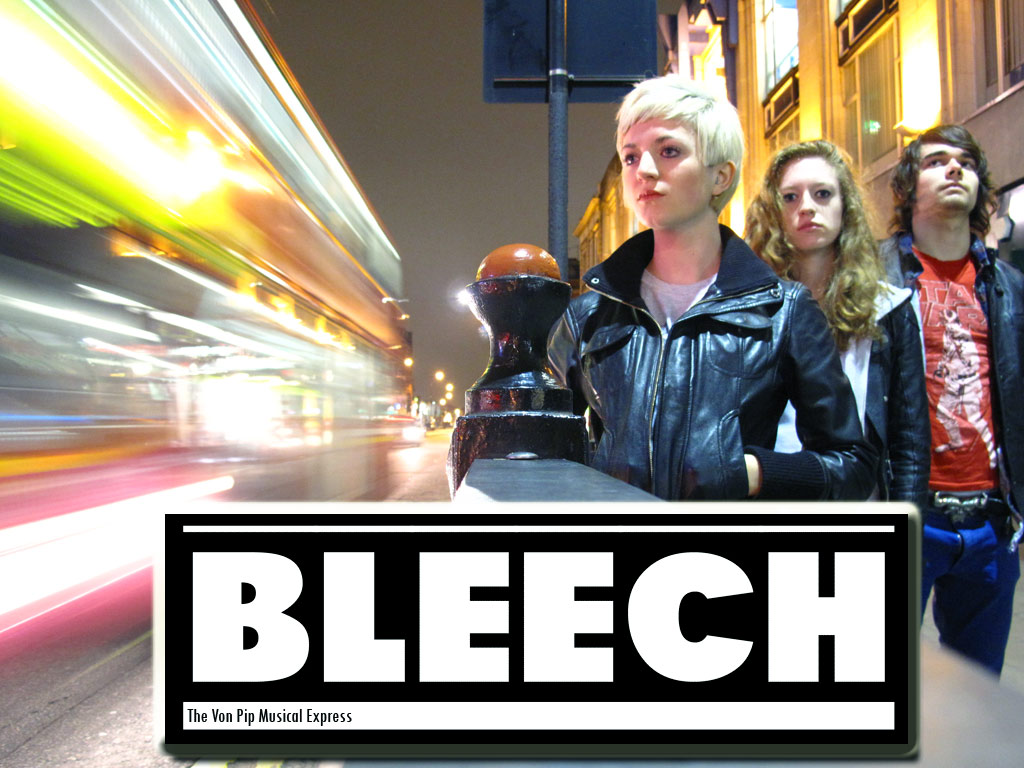 We’ve been fans of  Bleech for quite a while now. Tracks like ‘Are You Listening?’ Is It True That Boys Don’t Cry?’ and ‘Taking Over’ soon had our  musical radar beeping with unfettered joy. It therefore remains one of life’s great mysteries why we haven’t interviewed them before now. There’s no valid reason for such impropriety on our part, despite trying to adopt the maxim “don’t count every hour in the day, make every hour in the day count” some things occasionally slip through our big fat sausage fingers. The band are currently readying their debut album ‘Nude’ for release whilst preparing for a tour and their first jaunt to America, so we decided there was no better time than the present to feature them, before their ascendant star climbs way beyond the reach of the ‘humble bloggers’ orbit. ;)

Bleech’s music is loud, passionate and powerful, they’ve often been compared to grunge bands with a ‘Britpop twist,’ the former makes some sense, the latter less so. Comprised of  sisters Jennifer (Vocals , Guitar) and Katherine O’Neill (Bass, vocals) with their old school friend Mat Bick on drums Bleech are certainly not jejune revivalists feasting on the fetid carrion of a long dead scene whilst drinking from the stagnant well of nostalgia. Yes of course they have their influences but they utilise them to create their own sound.  What they do have are epic visceral guitars, pounding bass lines and thunderous drumming allied to fantastic melodies more reminiscent of  The Breeders,  The Joy Formidable and Blood Red Shoes than the brit-pop of say  Elastica or Sleeper. In essence Bleech play hook laden, loud, frenetic, rhapsodic rock with an intensity, passion and swagger that is difficult to resist. Their debut album should see them take their sound to a whole new level and hopefully ensure their fan base expands at the same rate as Dawn French’s waistline following a sale at the local cake shop. We had a chat with the trio about their background, their influences and their weirdest experiences to date!  – Thankfully this interview wasn’t one of them!

VP:   Obviously with two thirds of Bleech being sisters would it be safe to assume the two of  you grew up in a very musical household. To what degree did your family’s musical taste influence you and are your folks very supportive of Bleech ?

Katherine: You are completely accurate! Our dad is a musician, in an old R&B band so we’ve grown up in a house always full of great music. Our mum is a Stones fan and Dad is Beatles so we’ve probably been more influenced by dads taste in music! They are both so supportive of the band…we wouldn’t of got this far without their help.

VP:   You’ve been together a couple of years now and have gained high profile supporters such as Andy Ross (Food Records,)  Lamacq, Laverne, the NME et all  and you’ve just recorded your début album ‘Nude’ which I’m really looking forward to. Do you have a release date and did you enjoy recording the album? As a relatively young band did you feel you learnt a lot from the process?

Mat: At the time it was overwhelming the amount of support we had gained in such little time. Over the last few years we have learnt to take everything as it comes and try to use it to your advantage but the record should now speak for itself. In terms of release for us there is no rush to put out the album in its entirety, but there will some form of release soon.

VP:  So how did the man credited for discovering Blur, (Andy Ross) get to hear about you ?

Katherine: It was kind of through the grapevine. A radio plugger we were working with at the time mentioned us to Andy. Andy then got in contact with our lawyer and eventually met us. We worked with Andy for almost 2 years and played over 100 gigs in the first year with him! This helped us gain the stagecraft and experience to move forward.

VP:   How does a band go about sorting out the running order of an album, do you all discuss it and work through ideas  or does the producer say ..’This would work best’..

Jen: Trying to get to the finalised running order was absolute agony! There’s no structure to it, just who has the loudest voice! In the end we were all so sick of listening to the album back to back but finally got something we all agreed on.

VP:   Journalists and bloggers and fans  always look for points of reference to describe a new bands sound, I’ve heard Bleech called  grunge with a Brit – pop sensibility, would you say that’s a fair summation or do you find comparisons and pigeon holing a bit irritating ? Have you read a comparison and thought ‘I have no idea where that came from?’

Mat: I understand where people are coming from when describing bands because they haven’t heard them before, but yes we do find pigeonholing very irritating just as regurgitating old scenes of music and pretending to be like your contemporaries is equally annoying. I don’t think we are really part of any scene really we just write loud rock songs and play them like it’s our last every time…so simple, no bullshit. But aside, we are massive fans of grunge and Britpop so enough bitching!

VP:  I’ve sadly not caught you live yet as I live in the frozen north , but my friends down south tell me you put on a fantastic show   what have been your favourite gigs so far and what’s been your weirdest gig ?

Jen: One of our best gigs was supporting Wolfmother in Berlin at Columbiahalle. We almost didn’t make the gig as we were travelling from Hamburg to Berlin that morning but the only road that takes you there was closed! 7 hours later we made it to Berlin and then got stuck in traffic for 1 hour when we were 10 minuted from the venue!! But played an amazing gig!

Katherine: The weirdest gig we played was in a wine bar/ salsa restaurant… we didn’t realise this until we turned up with huge amps, full drum kit etc….we literally played in front of people eating their dinner….don’t know who it was worse for.. us playing or the people trying to enjoy their meals!!

VP:    What’s the plan for the rest of the year, album release and lots of promo ? Touring? Festivals, America in your sights?

Matt: Lot’s and lot’s going on this summer! We have a few festivals over the summer, including The Reeperbahn, in Germany, First Day’s of Freedom in Maidenhead and Lollipalu in Scotland. We then have a tour of the UK in September/October in preparation for our debut appearance in NY!!

VP:   I hear Matt is a big Beach Boys fan and you are all pretty much agreed on the Queens Of The Stone Age but what other bands are you fans of, do you have any disagreements on the merits of certain musicians or musical genres?

Katherine: haha yep Mat is a huuuuuge Beachboys fan, he can even reach all the high harmonies, pretty impressive. He likes anything from Mastodon to Daphne and Celeste. I love a bit of Reggae and Jen is really into Joni Mitchell and PJ Harvey. But the one thing that never gets flicked on the i-pod in the van is QOTSA…its more than you lifes worth if you did.

VP:  What inspires your songs , personal experience, film, novels?  Do you all write the lyrics and then jam on the music, what’s the process?

Jen: Well I write all the lyrics and sometimes come to the table with a song and we jam through a basic idea and develop the arrangement as a band, but having said that “I Wanna Be Me” was completely improvised during a rehearsal as a result of complete frustration about everything at the time and it just came together, naturally….

VP:  If you where to sum up ‘Nude’ in five words what would they be ?