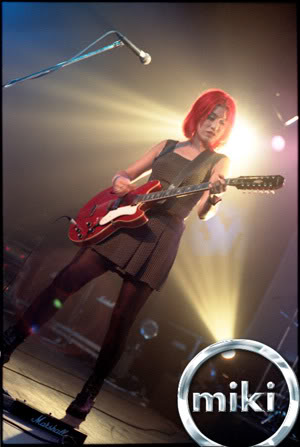 In the first of an occassional series, we get pop legends past and present to discuss some of their classic videos , the stories and ideas behind them, and what is it really like spending hours filming a 3 minute promo ?

What better way to start than with former Lush legend, the fantastic Miki Berenyi.

“Nothing Natural” By Lush

MIKI:“Nothing Natural video was an effing nightmare. Cannot for the life of me remember who made it but the guy some ludicrous idea of what he wanted us to look/act like in the video and it was nothing to do with how we are. I had to wear some ridiculous Barbarella-type sex-space outfit and had so much eye make-up on that my contact lenses were stinging my eyes. I seem to remember that the director wanted Chris to wear some translucent shirt with Michaelangelo cherubs on it that was so GAY. In the end, the boys were there as background. Thing is, to be fair, we had no ideas of our own at all, and back in the 90s the solution was to offer directors a shitload of money to come up with something fabulous that MTV would play. No wonder they just took the money and ran. Still, apparently Kurt Cobain saw the video and decided he liked Lush. So there’s a brush with a legend, if nowt else. And I may look like a rabbit mannequin caught in a headlight, but Emma really does look fantastic!”

MIKI : “Hypocrite was great fun. Again, we had actors and a set and it all seemed really over the top! Funnily enough, I remember the actors had a bus to eat and chill out on and – it was like the opposite of that scene in Extras – we went on there to try and be friendly and say hi and were told that we weren’t allowed on that bus as it was specifically for the actors and equity members. FINE!

Me and Phil had a go on the Waltzer and we both nearly threw up because the bloke kept it going for about 15 minutes – backwards, forwards, backwards again, on and on until we both had our hands over our mouths. But a whole day at the funfair and never having to queue. Well, who would want more? And I like this one a lot because Chris is genuinely having an absolute ball and it’s so nice to look at film of him so happy!”

MIKI : It’s a song about a car – specifically the Fiat 500, which Emma coveted at the time, so much so she wrote a song about it! The idea of the video was to spoof car ads from the time – I’m afraid I can’t remember which cars they advertised but one had a priest in it in Italy driving around Rome or something, another one had a bloke who had lost everything at the casino but still had his car, another one had a woman walking down the street having left her fiancee – chucking away the ring and all that – but she still has her car so that’s ok (possibly from the same series of ads as the casino guy). Can’t for the life of me remember what ad Emma in the vintage vehicle referred to – answers on a postcard if you can come up with it!

The much-loved and beautifully looked-after vintage Fiat was supplied by its owner, a great big muscle-bound guy with a ponytail who looked a bit like Steven Seagal. I remember being really surprised that a macho muscle-man like that would own and love such a dinky little quirky car!

Despite having passed my driving test sometime during the recording of Lovelife, I’d never actually driven again since so consequently I was a total novice behind the wheel. The whole video was filmed at a racetrack (so we wouldn’t have to worry about traffic) but even so I could only manage driving around in 1st gear. At one point the director wanted me to reverse up a hill. The car immediately careered off the road and into a trench. Poor Steven Seagal nearly had a heart attack.

Meanwhile Chris got into a downer about having to play a priest and felt a total pillock. I think there was also an element of ‘How come Phil gets to play the suave, James Bond-type (again!) and I have to be a fecking PRIEST?!’ Meanwhile, I had to grin like a maniac in every shot and was smiling so hard the muscles in my face started to spasm.

Miki: I remember us going to some field in the middle of nowhere and spending an entire day up a tree freezing our collective nuts and tits off (it was February). We got hoiked up into the branches and had our instruments precariously balanced around us. It actually doesn’t look that high up in the video but I swear, it was pretty dizzying and we nearly toppled off on several occasions.
Sometime around teatime we got a break to get the feeling back in our limbs before they sent us back up again. Steve, however, was past the point of tolerance and went sprinting off like a rabbit from a trap muttering something about how there was no way they were getting him up that bloody tree again.

AT THIS POINT can I just say that each of these videos was a lot of fun to make and all the people involved were really, really nice so any moany tone is merely down to that fact that when I see myself on screen, nine times out of ten I just want to scream and cringe, I look so bloody stupid and contrived. There’s an art to looking good and convincing on celluloid, and I don’t have it!