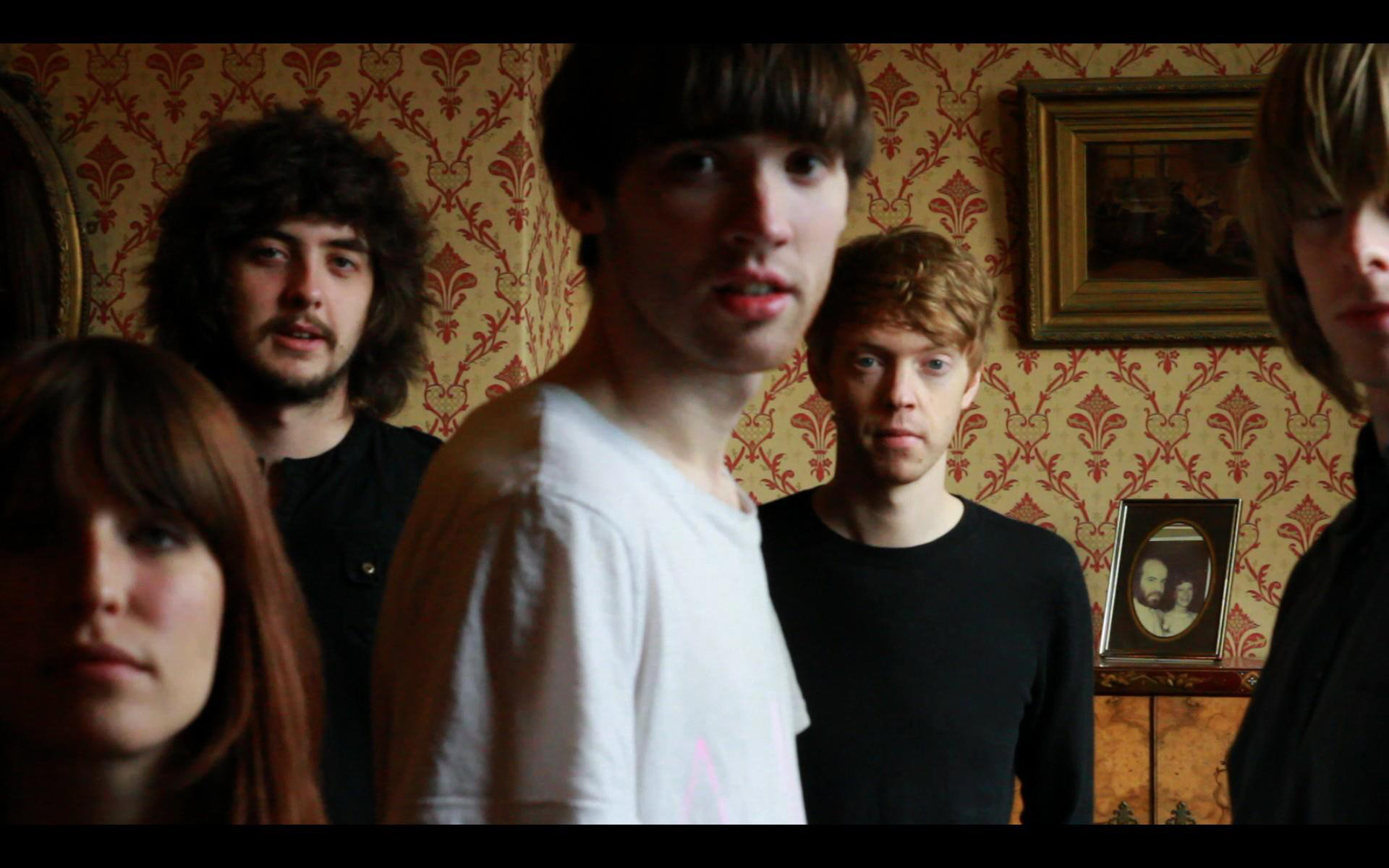 Meilyr and Dylan, the core members of Race Horses grew up in the isolated coastal town of Aberystwyth, not exactly a place renowned for being a hotbed of rock n roll depravity. In fact, they have described their formative years as the “opposite of something like Skins, teenagers weren’t shagging and taking drugs, they were listening to their dad’s record collections.”

While still at school, Meilyr and Dylan formed a band Radio Luxembourg, who garnered a cult following in Wales, even performing three successive years at the National Eisteddfod. Life intervened and the band went their separate ways. After university, Dylan and Meilyr regrouped with the addition of drummer Gwion Llewellyn under the name Race Horses and released a concept album about an ancient sailor looking back on his life, the acclaimed Goodbye Falkenburg. They make no bones about the album being widely experimental, at times sounding like a pop prog version of Gorky’s Zygotic Mynci.

The band now return as an expanded  five piece with the addition of harpist-turned-guitarist Mali Llewellyn and percussionist Dan Bradley. Their new single ‘My Year Abroad’ from their forthcoming album “Furniture” is a dark, throbbing slice of synth-laden sleaze. It isn’t just a great pop song with dark evocative lyrics which help conjure up an atmosphere of licentiousness,  it also manages to perfectly marry elements of swirling 80’s new wave with indie guitar pop, without ever sounding anything other than utterly contemporary. We spoke to Meilyr (M) and Dylan (D) to discuss the rebirth of Race Horses.

VP:  Hello! You’ve mentioned that your debut album ‘Goodbye Falkenburg’ was a concept piece about an ancient sailor looking back on his life and you said at the time you  felt as if you’d made your fifth record first. So how would you describe your feelings surrounding your soon to be released follow up “Furniture”?

Dylan– Very excited can’t wait for people to hear it. Goodbye Falkenburg was quite a psychedelic collage released just after we started. It was the start, playing smaller gigs and parties, we were in college and we weren’t in a position to tour it properly at the time. But with “Furniture” it feels really new and exciting for us, I’m kind of nervous as well but in a good way (night before the big race kind of nervous!). We are proud of the album and it works live really well – can’t wait to start touring it now!

VP:  So “Furniture” as a title? Is this a theme that runs through the album, we aren’t talking Martin Kemp sitting on a DFS sofa, but more along the lines of people becoming “Furniture” in a figurative sense?

Meilyr – No, but I would hope that Martin Kemp would like this record! If he has felt heartache from a separation, dissatisfaction with his meaningless daily life, boredom in his relationship, frustration, felt at odds with himself and with his work. The inability to express this uncertainty and pain to his friends for fear of rejection- the denial about the inevitable change that must come, and finally the will to pull through. Then this is the record for him- Or another good soul record.

VP:  Race Horses have expanded, does this feel like a fresh start, a new dawn? Race Horses MK II kind of thing?

D- Definitely, I’m glad we said that thing about the fifth album last time because this feels like album number 1. The album was recorded quickly and captured the energy of us playing live, the words and music are very direct – it was definitely a new way of working for us, we didn’t give ourselves time to over think it. Also with Mali and Dan in the band, it’s completely changed how we sound live.

VP: Growing up in Aberystwyth? Not terribly rock n roll? However, do you think being insulated from say, the hipster influences of a place like London gave you a different perspective, allowed you to develop your own tastes and create your own musical world?

D– Yes – we were very isolated in terms of any musical scenes etc. We’d be listening to our dad’s record collections, going around town in full on psychedelic paisley shirts, putting on bands in local pubs. It was a great place to grown up, we weren’t even aware of hip indie clubs – we’d just be in a local pub when we were 15 playing a mad choice of covers. I guess that’s why Goodbye Falkenburg sounds like it does – it’s a collage of influences that came from growing up with in Aberystwyth.

VP: of course Wales has a very rich musical history, do you feel a kinship or sense of national pride when artists from Wales break through?

D– It depends if we’re into the band or not, I’m not going to be proud of a band I think are rubbish because their Welsh. However, I’m quite lucky that some of my favourite bands happen to be Welsh. I think there’s probably more of a musical kinship with those bands we like rather than being from Wales specifically.

VP: It’s alleged that you’re what one might call a “method singer” wearing a suit to sing your latest Single My Year Abroad to get into the character of the businessman in the song whilst at other times stripping off to sing on the more seedier moments of the album!

M– Clothes are very important to me, not for looking good or anything, just in terms of changing how Ifeel, and challenging my identity. You can wear something and it makes you feel truly awkward, something oversized or undersized, or a wrong colour or texture .Wearing a certain kind of check shirt would make me feel deeply violated, and feeling silk against your skin can put you in a certain mood. Tight trousers and no top makes you want to tear something up. So yes, it was important for me to feel right to get the right performance, so I could get the right feeling. The suit was good, it was the right thing for the song, and I felt restricted. It was pinstriped and shiny, a new suit- unlike anything I would wear in private.

VP: Looking back on recording the album, what’s your abiding memory?

D– It was one of the best weeks I’ve had! We recorded it in South London, stayed in mad youth hostels and had the best time in the studio. The songs sounded energetic and the instrumentations and recording techniques were exciting to us. No one else knew we were making our second record at the time; we got 24hrs notice that the studio was free and just jumped in the van the next morning. The space in the studio (The Pool) was amazing, there were walls of analogue synths everywhere and we just got stuck in. We were determined not to layer and overdub too much, we wanted to capture strong melodies, the energy and the words. We tried to avoid anything that felt too comfortable or familiar (e.g. rhythm guitar in choruses etc).

VP: You said you grew up listening to your Dads records and prog rock, what sort of music do you listen to now, the new single at least defiantly has a dark 80’s synth noir vibe going on

D– I was listening to Taxi Girl and Soft Cell I think and Mei was inspired by the film Enter the Void around the time My Year Abroad was composed. At the minute, I’m listening to Beach House and Django Django.

VP: What’s the plan for the rest of the year, and how would you define success in the modern day music industry?

D– Touring around the UK and hopefully Europe too, we haven’t toured extensively yet so we’re heading into the unknown a bit which is exciting. Success would be more people coming to gigs, people buying the record and people laughing at my jokes. Pretty standard definition of success really!

VP:  Five words to sum up the album