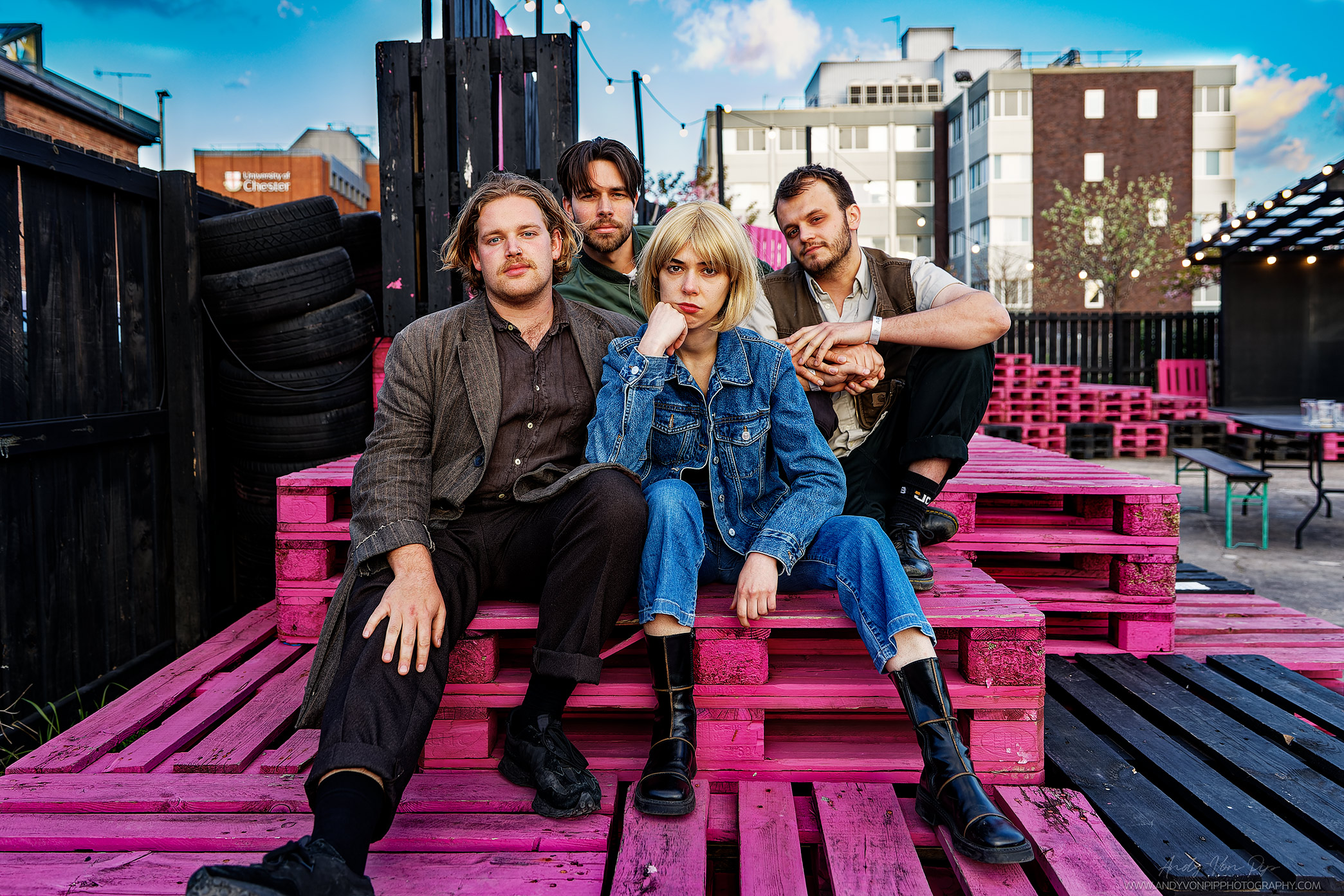 Nottingham newcomers Divorce have made quite an impression with their stunning debut single “Services,” a genre traversing masterclass which juxtaposes singer and bassist Tiger Cohen-Towell’s soaring vocals with searing scuzzy guitar riffs.

The band are familiar faces on the Nottingham music scene comprising Tiger Cohen-Towell (Vocals, Bass) and Felix Mackenzie-Barrow (Vocals and Guitar from Megatrain, Kasper Sandstrøm (Drums) from post-punk quartet Do Nothing and Adam Peter Smith on Guitar.

Under normal circumstances, Divorce is a term that would signify a parting of the ways, but in this case, it marked the beginning of a musical union. The genesis began when Tiger, Felix and Kasper were involved in contributing to a compilation album organised by Hockley Hustle, a charity music festival based in Nottingham. They ended up writing and submitting a moody number entitled “John”. It’s not really a Divorce track,” explains” Tiger” as we chat at Birkenhead’s Future Yard venue prior to the band performing. “Although the track does have elements of what we are now, it’s dark and quite sad. It was a lockdown track, really. I hadn’t seen Felix in ages as he was in lockdown in Somerset and I was still in Nottingham. So we wrote the components of the song separately but when we brought them together we thought, ‘wow thematically this really works.’ It’s about a couple who are enduring a really hard time financially.”

Felix takes up the story. “When I was growing up, my parents ran a touring theatre company, and they were always hustling, so I took some inspiration from that. And then imagining what it would be like during a lockdown when everything just shut down. Anyone in this sort of business relies on big events, like say Nottingham Goose Fair, which is huge there and who incidentally make the best Mushy Peas in Nottingham – if not the world. So the song is about what happens in a relationship when a lockdown makes it impossible to earn your livelihood.”

Tiger and Felix enlisted their friend Kasper, guitarist with Nottingham post-punk outfit Do Nothing. “I’d previously helped out ‌on drums for Felix and Tiger’s old band Megatrain,” explains Kasper, “so we were already firm friends. For this project, I’d recorded some instrumentals and sent them over to the guys and then the very next day they replied saying” here’s the full song”. I was like ‘wow, ok that was quick’!”

And this collaboration was the spark that lit the fire for Divorce “so it wasn’t a divorce at all, it was more like a marriage” laughs Tiger. “But it did take about six months or so for it to all come together,” adds Kasper, “so in some ways, it was as slow and painful as a divorce.” Adam, who had been playing the guitar in a previous project with Felix, came aboard, as did Hand In Hive records. So here we have a new band arriving out of lockdown seemingly fully-formed? Already armed with a record deal? Should we be suspicious? Is this part of some insidious plot? “Yes, we’ve been rumbled! We’re Industry plants,” laughs Felix, “with no money!” However, the truth is rather more mundane than fantastical stories of music industry conspiracies, as Kasper reveals, it was a simple case of old school “spamming”. “We just fired off emails into the void to see if there was an interest. Sometimes it works, other times you hear nothing at all. But we did get a few interesting responses and Hand In Hive was certainly the most enthusiastic.”

“Services,” a track about road trips and the mundanity of service stations garnered glowing reviews and has been described as “grunge meets country”. However, the melding of genres was more of a happy accident rather than something the band had meticulously planned for stylistically. “I think because we all have such different musical backgrounds, we all bring something to the table. Whether we like it or not!” explains Kasper. “We weren’t going for any sort of particular sound per se” reveals Adam, “although when we were recording there was a Felice Brothers track – “Jazz on the Autobahn” that came up a lot.” Tiger agrees, “Yeah we do take inspiration from The Felice Brothers in terms of the folky/ country side of things, but when people kept asking us what our genre was I guess country grunge was the nearest thing we could find, certainly for ‘Services.’ ”

The accompanying promo for “Services” saw Divorce team up with Bristol-based video collective Clump Collective for a ’70s inspired split-screen video. “We wanted to reflect a certain playfulness in the video,” explains Tiger. “For the song, I was drawing on genuine sadness and instability from my teenage years, but at the same time, realising some of my reactions were quite juvenile. I think as a teenager, you’re likely to blow things out of proportion. So it’s about light and shade and this was Clump’s interpretation of that. I really like the sitcom element that comes across in it.”

Given the theatrical style of the video, the band name and the fact that Tiger whose natural hair colour is very dark, dons a blond wig on stage, I wonder if the band are playing exaggerated versions of themselves or alter egos when they perform as Divorce. “The truth is Tiger’s wig is actually made from Kasper’s own hair,” laughs Adam. “You know what?” continues Tiger, “I bought it with no intention of making it my stage thing, but I started wearing it and it made me feel kind of further away from myself. It might sound corny, but it’s kind of like a layer of protection. I see it as my crash helmet now. But despite some interesting interpretations from some people, it’s really not that deep. I initially bought it purely because I liked it.”

The band has just completed their first headline tour, which they admit was asking the audience to put a lot of trust in them based on the fact they’ve only released one song so far. “We were pleased people turned up! And we did feel more like a proper band when we could finally play live,” says Tiger. “We spent a lot of time incubating during lockdown” reflects Kasper, “in some ways the one good thing about Lockdown was being able to take things at a slower pace. So we wanted to make sure we had a solid collection of songs ready for when we could play live again.” The feedback from their live shows has certainly been gratifying and clearly “Services” is the song that currently gets the biggest reaction. Tiger laughs “It’s funny because at the end of our set we play ‘Services’ and no matter where we are there’s always a small group of people at the gig who seem to know the words… which is amazing! It’s been fun for sure. I think winning over Hull was our greatest achievement so far. They were a tough crowd, but we got there in the end. And of course, once you’ve cracked Hull, you can crack anywhere, right?

You can also catch Divorce at The Great Escape Festival on May 13th on The Hand In Hive/ Sub Pop publishing Stage at the Mucky Duck at 8pm and earlier on the same evening at the Love Thy Neighbour stage at The Hope & Ruin at 6:30 pm