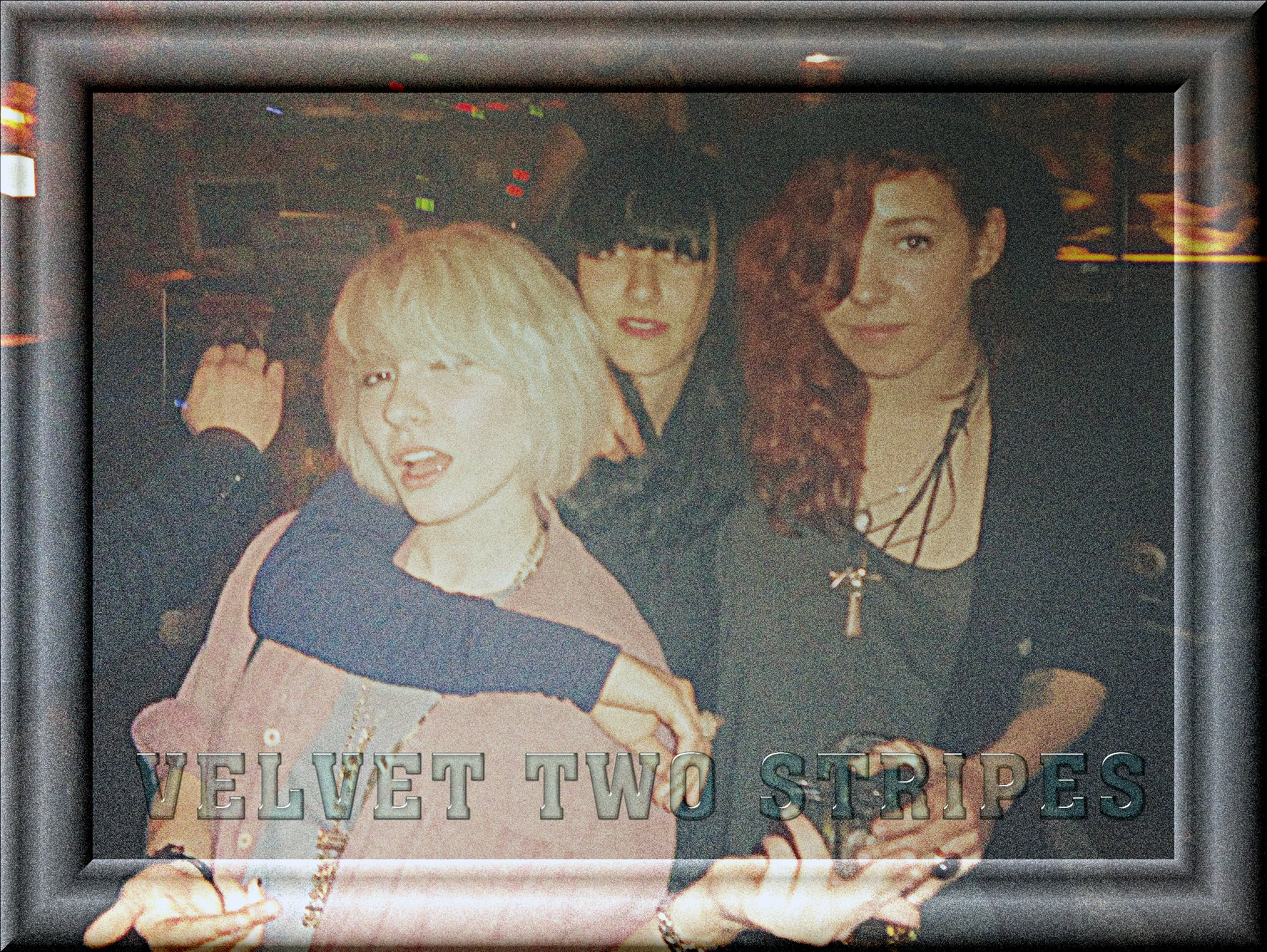 When we discovered Velvet Two Stripes we were, to use a time honoured phrase, blown away.  This was due in the main down to the simple fact that their songs were just so fucking good and that their sleazy psych-blues riffing combined with an innate sense of rock n roll cool seemed be so natural and uncontrived. We described“Supernatural,”  the lead track from their  début EP” as a “dirty, sleazy, sexy, prowling curb crawl of a record” and “filthy genius.”  What surprised us was that this beautiful, visceral noise was produced by three pale, slim young girls who hail from a land better known for cuckoo clocks and well ventilated cheese rather than for channelling the spirit of rock n roll.

We’d like to delude ourselves and suggest that despite our enthusiasm for new music, we don’t indulge in verbose hyperbole on a regular basis, mainly because  statements such as “meet the future of rock n roll” are tossed about far too liberally in the eternal search for the next big thing, and such glib aggrandizing, places an unfair weight of expectation on  young bands just starting out. However based on what we’ve heard so far from Velvet Two Stripes with songs such as  “Supernatural,” “Hellhound,” “Dead Man” and “Cloud Seven, we have every reason to be very excited indeed. There’s  little doubt this Swiss trio  possess  huge potential and will hopefully make a significant dent on the musical landscape in the future, furthermore we imagine it’s only a matter of time before the NME and the rest of the UK music press are all over them like over-amorous suitors on amyl nitrite.  Comprised of sisters Sophie and Sara plus their friend Franca, they’ve only recently started to gig beyond the borders of their homeland but in a very short space of time have already started to create something of buzz.

For such a young band, who appear to have arrived fully formed with an instinctive feel  for low down and dirty rock n roll,  and with a guitarist who at times sounds like she’s been possessed by the ghost of Jimi Hendrix, they surely couldn’t have been exposed to trite nonsense like dreadful boy bands in their youth – could they ? We decided to investigate and chatted to singer Sophie.

VP: Hello there!  So, first up is the traditional “How did you get together?” style question


Sophie:  Well, my sister Sara and I have played in a variety of bands since we were 14 and 11 years old. We met Franca during a band workshop, became friends and we decided to form our own band :)


VP: How did the name come about was  it inspired by the Velvet Underground? The White Stripes or maybe just a pair of tracksuit bottoms ?

Sophie: Actually it’s just words I picked up during a stay in London. We didn’t notice that it was a mix between The Velvet Underground and The White Stripes until someone made us aware of it. We like both bands a lot, so I guess it must have been fate that helped us  chose this name. ;)

VP:  Do you all write the songs, or is one of you the lyrist, maybe another writes the melodies ? Tell us how it all works ?

Sophie:  I’m mostly the lyricist but it’s not like everyone has only one function in the band. We usually just jam around.  If an idea for a song comes up, we really start to work on it and everyone brings in her part.

VP: Who would you say are your biggest musical influences ?

Sophie:  Of course a big influence are all the 60s and 70s blues musicians. But also current bands like The Black Keys or The Dead Weather who inspire us a lot.

VP: What’s the music scene like in Switzerland, is it supportive of young musicians?

Sophie: The problem is that as a Swiss band you have to have a firm, fully formed concept from the beginning otherwise you won’t get noticed. Another problem is that Switzerland is really so small and in a relatively short space of time you’ve already played everywhere there is!

VP:  Are your families also very encouraging or are they a bit worried about their daughters embarking on the decadent  Rock n Roll highway  ……

Sophie:  Sure they are worried sometimes but they are very proud of us as well.  They are also very interested in music so I guess it’s easier for them to understand the passion we have for what we do.

VP: Although you’re a relatively new group you’ve previously supported EMA , what have been your most exciting moments as a band so far ?

Sophie: I think the most exciting moment was our first show at White Trash, Berlin. It was the first time we played outside Switzerland and we had no idea what to expect. There were so many people at the venue  and we brought some demo tapes as free give-aways. Afterwards everyone was raving about our show and wanted a demo tape but we only had 30 copies so we just threw them into the crowd. We felt like real rock stars.

VP:  Talking of being excited as soon as we heard “Supernatural” we were performing little jigs of joy, what have you got planned for the rest of the year, any plans to come over to the UK yet . Oh and when is your EP out and where can we buy it ?

Sophie: There’s a lot happening right now. Our EP is released on 29th June and available on iTunes, Amazon etc. We are planning to release an album by the end of this year and who knows, maybe we even pay the UK a visit. But for now we’ve got a couple of shows in Switzerland and we gonna play at some really cool festivals during summer.

VP:  Truthfully … what were the first records you bought ?


Sophie: The first records we bought were compilations with bands like Backstreet Boys, Westlife and Before Four. I was a huge Westlife fan when I was much younger ;)

VP: Five words to describe Velvet Two Stripes would be…………….