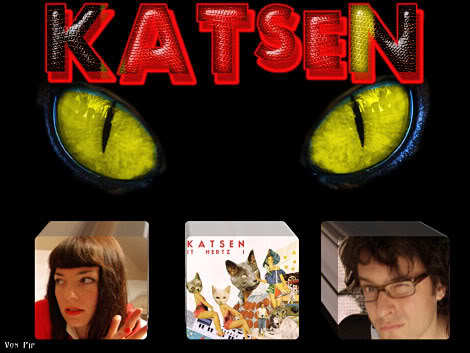 You wait years for a decent electro band to turn up and then a whole fleet come along at once! The latest to cruise down our very own “Electric Avenue” and gleefully twiddle our musical knobs is Katsen. They are a duo who take the best of the darker side of 80’s electronica, deconstruct it and produce perfect futuristic D.I.Y, pop noir. Electronic music has often suffered from heavy handed over production which has often turned a blind ear to the maxim “less is more”, but the fact is you don’t always have to throw everything from the “effects arsenal” into the mix to produce great music.  Alas many big name producers behave like the salesgirls who work at your local department store’s makeup and perfume counter. You know the ones, orange-hued lasses who deem it necessary to daub every single product they stock, all over their faces and whose ghastly over painted visages owe more to Coco the Clown than to Coco Chanel. It’s therefore a refreshing change to find a band like Katsen whose minimalist approach ensures the essence of their songs remain intact, unsullied and not buried within a flashy gimmicky over produced avalanche of over elaborate synth effects and ego driven ostentation.

Their debut album “It Hertz” draws on many influences and melds them into a glorious, dark , D.I.Y. electro pop extravaganza, mixing a haughty sexy electronic aloofness with real emotion and demonstrates the duo’s innate understanding of just what elements are required to produce great pop song! It’s an album which at times sounds as if members of Cabaret Voltaire, The Human League and Strawberry Switchblade have surreptitiously met to form an avant garde, Kraftwerk influenced, musical collective. It mixes wistful melodies and strident vocals with relentless, hypnotic beats, beneath which runs an undercurrent of Orwellian paranoia. If “Bladerunner The Musical” ever hits the stage, Katsen should be commissioned to score the music! Their love of all things Casio is evident throughout “It Hertz” and whilst the likes of Little Boots and La Roux are being feted by the populist media as the acceptable face of “the new wave of the square wave ™,” you’ll find Katsen lurking in the dark shadows of nightclubs, nursing strong drinks and bruised hearts quietly making plans to subvert the electro pop mainstream with their own special brand of noir electronica. We spoke to both parts of Katsen, Donna Grimaldi and Chris Blackburn to find out more…

VP: The story goes that you met whilst selling clothes at craft fairs, that your musical  union  survived Donna running away one summer to join the circus, and Chris teaching acting to ballet dancers….So what’s the truth ? ;)


Donna: It’s the truth… seriously! I was head costumier and showgirl in a travelling circus and Chris was an acting teacher at a drama school

VP: Katsen? What does it mean, and given your album cover would it be safe to assume you are fond of all things feline?

Donna: The name Katsen came from the packaging of a toy I bought for my Siamese cats. Yes, we both love cats but I am pretty obsessed and have a growing collection of 1950’s porcelain ornaments of them.

Chris: It’s actually a mis-spelling of KATZEN (German for cats)… I liked the idea of a band called the cats… but with a nice Teutonic twist. I changed the spelling because the z looked wrong in the font I wanted to use. and there are a lot of German cat websites for us to get confused with. But, yeah, we like cats. I’m a fan of pumas, personally.

VP: Talking of your album “It Hertz” has just been released,  I’ve heard it and think its fantastic, but how would you describe it to those who are new to Katsen?

Donna: Thank you!  It’s very difficult putting a label on our own music but I suppose others would describe Katsen as electronic pop.  Although, saying that, we envisage ourselves more a member of the ‘indie/ alternative’ scene than of a strictly electronic one.  We’re pretty D.I.Y and lo-fi, creating all of our own videos and artwork as well as producing our own music.  I think this enables us to be in control of all elements of Katsen and this in turn makes the process more intimate & personal.

VP: Where can people order the album?

Donna: The album can be ordered via our website or Thee SPC’s. It’s also available at Rough Trade, Norman records and Rounder Records (in Brighton.) It’s about to be released in the US by Shelflife, this version has a slightly different track listing and will feature “Start As You Mean To Go On” instead of “Cactus

VP: What sort of music/artists are you fans of, which artists would you say had the biggest influence on you growing up?

Donna: I loved lots of 80’s music and was a big fan of the Cure in particular as well as New Order; Siouxsie & the Banshees, Soft Cell and Dépêche Mode whilst growing up, and still am!  Many of the bands I adore were making amazing music in the late ’70’s and early ’80’s. A melody and a catchy tune with a dark under current generally gets me going.  I also loved lots of early 90’s indie such as Pop Will Eat Itself, The Cranes, The Sundays, PJ Harvey …. I love front men/ women that have a strong look & persona, almost like comic book characters. I also have a very soft & nostalgic spot for Sheep On Drugs.

Chris: Oh crikey! From the age of 9 to about 13 I only ever listened to a combination of “Unknown Pleasures”, “Low”, “Replicas” and Peter Gabriel’s first 4 albums. I was a right laugh! The most memorable moment for me musically was when, at age 3 or 4, I heard Wendy (then Walter) Carlos’s Brandenburg concerto (can’t remember which one). I just sat there in awe, not knowing where all these exciting, sounds came from, with all their different personalities, not knowing what a synthesizer was. It was like listening to pure imagination coming to life!

VP:  What’s the greatest album ever released …and why?

Chris: Whaaaaat?!? Oh blimey… er um… I’m sorry; I really can’t answer that… too many greatest albums all for different reasons. Nope, I’m gonna have to rebel on this one!

VP: And talking of song writing how do you go about it as a unit, do you write separately or together? Do lyrics come first or is it the melody? We demand you reveal the secrets of your musical alchemy!!

Chris: This is different for each song. We work separately at first, and then come together at the end. A song can emerge very quickly, with most of the words and music happening together (“Let’s Build A City” and “Where Nobody Can Find Us” more or less were finished in minutes)… with clear themes, or messages. other songs will take longer… “Constellation” was an instrumental for ages… I just wanted an oblique song vaguely about international travel, avoiding reality, and our place in the cosmos… that finally got written on the train to Brighton to see Donna. When we come together, it comes together. Something we strive for is interesting lyrics which can be read in several ways. We try to avoid boring love songs. They are all love songs, however.

VP:  Now, I know it’s an unassailable fact, that people who produce electronic music love gadgets, so what gadget couldn’t you live without?

Chris: Unfortunately, that list of toys is largely in my mind at the moment… there’s lots of stuff I’d like to be using… I’d particularly like a Sid Station and a Mopho… but the toys I couldn’t live without are the toys i’ve always had… my Roland sh-1, my collection of Casios… hmmm… missing them… might go up and give them a stroke in a minute…

Donna: The release of our debut album! Being released not just by Thee SPC in the UK, but Shelflife in the US too. Being album of the week on Steve Lamacq’s show on Radio 1.

VP:  Five songs that would always feature on your perfect mix tape are …?

“Take Me I’m Yours” Squeeze

“Rip It Up” Orange Juice

“Blister In The Sun” – Violent Femmes

“Where Nobody Can Find Us” by Katsen

“Let’s Build A City” By Katsen