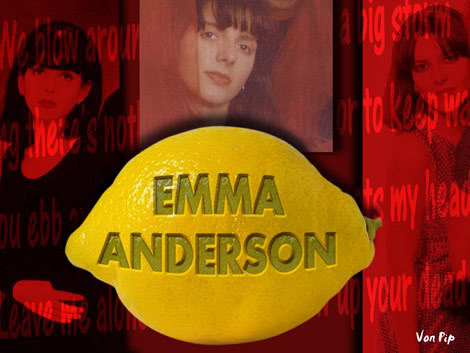 Legends are like buses, you wait for one for ages then two come along at once!!! It may be apparent to anybody browsing the hallowed pages of the VPME that we are rather HUGE fans of Lush and just as our proprietor Mr VP had finally been retrieved from cloud nine after interviewing one of his hero’s, Miki Berenyi , he now finds he’s been given the opportunity to interview yet another hero, the other half of the song writing team and all round guitar genius from Lush, Emma Anderson. We wonder if the poor fellow will ever be the same.

Emma and Miki met at school both having a shared passion for music, so much so that they wrote fanzines and played in various bands. It wasn’t until 1988 that Emma and Miki formed Lush, and rapidly became one of the most talked about new bands in London . ( For more details on the Lush story go here ). Following the tragic events surrounding the disintegration of the band Miki disappeared from music scene (aside from the odd guest appearance,) however Emma returned to music forming a new band, Sing-Sing, with vocalist Lisa O’Neill. They released two albums – “The Joy of Sing-Sing” in 2001 and “Sing-Sing and I” in 2005, the latter being part financed by fans before officially disbanding on New Year’s Day 2008. In a perfect world Emma should have a huge record deal and be regularly appearing on shows like Jools Holland. Alas, unlike the music Lush produced, the world is far from perfect. We chatted to Emma about her time in Lush, Sing-Sing and the music biz.

VP: What are your favourite memories of your time spent in Lush?

EMMA: There are so many (probably too many to put here)! Signing to 4AD was definitely one (I had been a big fan of the label for years) but also lots of tour and recording memories. Lollapalooza in 1992 was fantastic fun for 2 months and we had a great time (which we didn’t expect). Playing ‘Cop Killer’ with various members of Soundgarden and Ministry dressed in a Charlie Chaplin suit was strange but fun! In 1996 it was also really satisfying getting in the charts and doing Top of the Pops all those years after we had formed. Obviously I have a lot of very fond memories of Chris too. He was a great person with an inimitable sense of humour. I still miss him. One of the funniest moments I recall was whilst we were in the rehearsal room he was talking about Candida from Pulp. I just said, apropos of nothing, ‘Candida Albicans’ and he seriously said, ‘Is that her surname?’. I nearly had an injury laughing.

VP: …and what are your weirdest recollections of your time with the band?

EMMA: Taking a ferry from Newcastle to Bergen, Norway with a load of geriatrics copping off with each other and a limbo dancer performing under a bar of fire on Chris’s birthday in 1994 was another strange event. Playing the Weenie Roast in 1996 in California and being on one side of a rotating stage with The Fugees on the other and being wheeled around, because they had been late and were running over, whilst they were playing ‘Killing Me Softly’ (which was Number One in the USA at the time) and having to take over the show was bizarre. There were so many – thing is people think Spinal Tap is funny but not really indicative of how it is to be in a band – people think it’s exaggerated . The fact of the matter is… Spinal Tap is actually brilliant because it’s not that far from the truth!

VP: You were quoted as saying towards the latter days of Lush that you were fed up with the industry that you felt like a “product”. So it would be safe to say that in the end you were fairly disillusioned with the music bizz?

EMMA: I was disillusioned with the way the band was being managed but not with the business in its entirety – I mean I went on to have jobs in the very same business (and I still work in it) and there are a lot of good things about the music industry and a lot of great people (but a lot of idiots too). I just felt the band was being steered in a direction that was wrong and morale became very low. I wanted out and that was even before Chris died.

VP : After Lush officially called it a day, did you have any idea what you wanted to do musically? Was finding somebody to collaborate with a plan or did Sing-Sing come about more by virtue of a “happy accident?”

EMMA: I just started writing songs not really knowing what was going to happen though I kind of knew I didn’t want to form another 4-piece indie band. I demoed those songs for 4AD with myself singing but was dropped but I wasn’t fazed. I then met Lisa O’Neill via a guy I was going out with at the time. She had worked with Mark Van Hoen whom funnily enough, someone I knew said, was looking for collaborators so it kind of all fell into place and Sing-Sing was born. The way Mark worked, i.e. lots of programming and working stuff out on a computer, was a really nice change for me.

VP: Sing-Sing’s sound was definitely different to Lush’s was this deliberate or just a natural progression in terms of where you were at that stage in life?

EMMA: Following on from the last answer, I really liked the programmed aspect of Sing-Sing’s music, not just the process but also the way it sounded. Yes, I had done the 4-piece indie band thing and wanted a change. It was great being able to use lots of different instruments like Moogs, trumpets, pianos, strings and samples with relative ease (as you didn’t need to hire big studios and spend ages with tapes etc). Also Lush’s records had been very expensive to make. It was a revelation that you could make something so much more cheaply, which still retained quality, due to computers.

VP: What are your fondest recollections of the “Sing-Sing” years?

EMMA: ‘Feels Like Summer’ appearing on ‘Now That’s What I Call Music 6’ in Poland was quite fun. Also making the first album, ‘The Joy of Sing-Sing’, was enjoyable. We were signed to Sanctuary at the time and were able to use their studio Nomis (which doesn’t exist anymore). We got in some great guests too – Audrey Riley, Tim Keegan, Vinny Miller, Mig Moreland and Poppy Gonzalez. Things got harder after we were dropped from Sanctuary and didn’t really get any easier until we set up our own label for the second album, ‘Sing-Sing and I’. Making and selling that ourselves was pretty satisfying. All-in-all though, Sing-Sing was pretty hard work but I am really glad we did it.

VP: There is talk that you may embark on a new musical project, are you in a position to enlighten us or is it top secret?

EMMA: It is just talk at the moment. There is nothing to report as yet. Day job taking up a lot of time at the moment! I would like to do something else though.

VP: Do you think the ex-members of Lush would or could ever collaborate on a musical project again?

VP: What’s the weirdest piece of fan mail you’ve ever had?

EMMA: Erm, I had a lesbian one once which was quite weird. When people draw pictures of you and give them that can be quite odd too …..sweet but a little strange. I was also sent a ukulele once. I wish I knew how to play it!

EMMA: Oh God – loads of different stuff as always. Trying to catch up on old stuff e.g. Gene Clark and Terry Callier but I also I like established current bands like Portishead, The Shins, Martina Topley-Bird, Goldfrapp, The Shortwave Set, The Foo Fighters and Ian Brown. Also, I love the Sam Sparro track ‘Black and Gold’. It’s genius.

VP: You have moved to Brighton after spending nearly all your life in London, what do you make of the music scene there?

EMMA: To be brutally honest, I am not THAT interested what’s going on musically down here. I moved here to have a more sedate/better pace of life and I don’t get very involved in the ‘scene’. My experience of it though is OK but I find it a bit inward looking but I think having lived in London all my life that is understandable. There are good venues and bands do visit here regularly but my days of regular gig going are over! Brighton is a great place to live though. I love it here. I prefer going for a nice meal in a country pub in The Downs than going to a gig! Not very rock and roll, I know but I don’t care.

VP: Ok time to get all “Desert Island Disc”, if you could take one album, one DVD and one book to this mythical Desert Island what would they be?

VP: What are your own personal favourite songs from both Lush and Sing-Sing?

“Sweetness And Light” By Lush