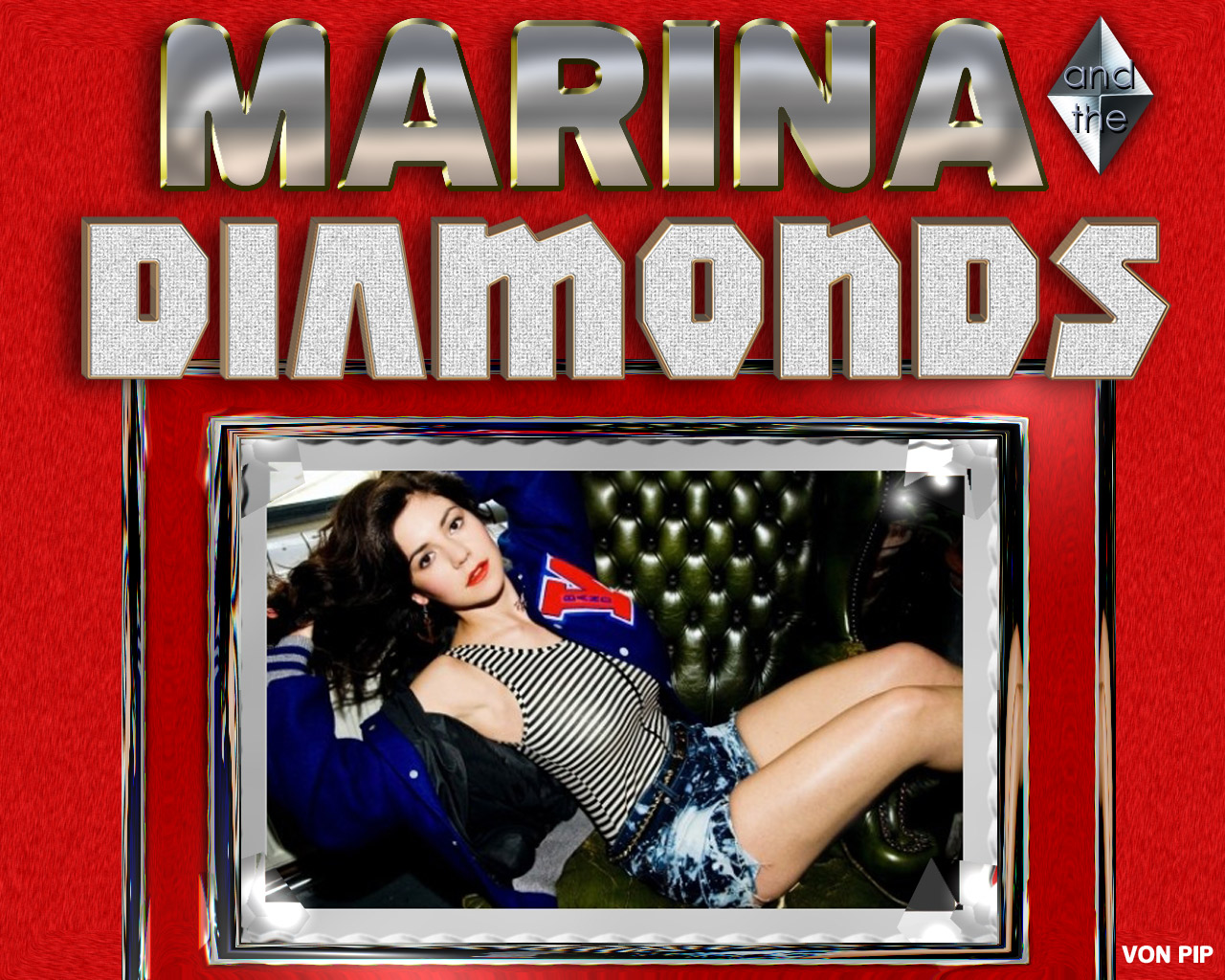 As soon as I began listening to Marina And The Diamonds I quickly experienced the same sort of “brain-gasam” enjoyed by Alan Yentob  as featured in BBC arts show “Imagine”. This disturbing spectacle occurred during an episode in which Yentob investigated the core elements of Dr. Oliver Sacks book “Musiciophillia: Tales Of Music & The Brain” which examines our physiological relationship with music. As part of the show our facially hirsute hero underwent an MRI scan which purported to show his brain’s emotional response to certain pieces of  music.  This in turn led me to ponder on my love of music and wonder what an MRI scan would reveal in terms of my own response to certain pieces of music. For example if I found myself forced to listen to the tuneless ego-centric bleatings of failed Butlins Redcoat, Robbie Williams, I’m fairly certain the only emotion this highly sophisticated piece of medical equipment would be able to discern, would be mild irritation. On the other hand, such is the euphoria induced when listening to the aforementioned Marina And The Diamonds I could quite easily envisage my brain lighting up like a firework display at the Epcot centre on the 4th of July! (Technically an intense pleasurable emotional response to music observed during such a scan would actually show areas of my brain literally becoming “bathed in blood”, as happened with Yentob when listening  Chopin.

Marina and The Diamonds is in reality the incredibly talented Marina Diamandis from Wales, or possibly ancient Greece, or even both, and she has followed up her fabulous debut single  “Obsessions/ Mowgli’s Road” with the amazing “Crown Jewels” EP.

Her work has sometimes lazily been compared to the likes of Kate Nash , Lily Allen, Florence and The Machine (insert any upcoming female singers name here ) but other than the fact that they are all female, write songs, play instruments and have a head and arms and legs there is little similarity or as Marina rather more bluntly puts it “I’m sooo like Kate Nash because OOPS! I have a vagina and a keyboard.”

Marina’s songs stand on their own merits, they are distinctive, unique, intelligent, literate, powerful and moving. I’m not going to dub Marina “kooky” or “quirky” or “off the wall” as this could erroneously hint that there is some sort of novelty or gimmick at play here, which simply isn’t the case. And another thing, why on earth are innovative female performers so often described in such terms, yet their male counterparts, who have also torn up the musical rule book, are called “experimental” whilst heroically depicted as “visionaries” or “mavericks”? If we must make comparisons ( and I’m afraid we must, because where in the world would music bloggers and journalists be without them,) then a new wave Kate Bush, maybe a slightly better fit, but even this doesn’t really do Marina’s music justice, maybe you should just listen to it because writing about music is like having a foot massage with your wellies on, to experience it fully you have to really feel it.

Despite the recent success of female performers in 2009 such as Florence, La Roux and Little Boots, Marina doesn’t see herself at the vanguard of some sort of “female movement” as she explains ‘When Britpop was at its peak, all the Britpop bands got lumped together but, personally, I do my thing; I write songs, I perform and I couldn’t give two shits about what X, Y or Z are doing. If we have 15 girls rise to the top this year and they’re all super-talented, then brilliant. But good music is good music; who cares if you are male or female?’… She certainly tells it like it is and demonstrates a refreshing candour which may one day have the suites at “big label music” twitching nervously, whilst they work on a marketing strategy aimed at airbrushing and diluting her personality. But such an attempt would rather be missing the point, I mean do we really want an army of interchangeable “Stepford popstars” all nice, polite, safe musicians who have nothing to say and merely front a corporate vision of what pop should be? That may be Cowell’s vision of nirvana but it’s my vision of pop hell! Besides, such brutal honesty only makes Marina more endearingly real to her ever growing army of admirers as regular readers of her blog will surely testify. In fact it’s the people with passion and talent like Marina who can actually help halt the apotheosis of the bland, the celebration of the talentless and the beatification of the terminally stupid.

And so after being seduced by her music I simply had to tell her that if she isn’t a huge success in 2010, I’ll be demanding that the Great British record-buying public undergo a compulsory MRI scan to ascertain whether they actually have brains. ;)  And that’s what I did …….

VP: Hello there, let’s begin with a bit of background…you’ve been releasing  some of the best new music I’ve heard for quite some time under the name Marina & The Diamonds, but who are the Diamonds  I thought this was  essentially a solo project?

MARINA: I am a solo artist. But I like fantasy and I hate loneliness so the idea of Marina & the Diamonds instantly felt cute and warming and not so egocentric as Marina Diamond.

VP: You’ve just followed up your début single “Obsessions”/“Mowgli’s Road”, with equally majestic “Crown Jewels EP” can you tell us a little bit about the songs on the EP ?

MARINA: It’s down to you whether you want to read into the songs or not. I’m a pretty open person in my songs and so don’t feel it’s right to elaborate any more on themes or subjects.

VP: Any news on when we might expect the début album or are you still writing and biding your time waiting for the right moment to unleash your album on the Great British public…?

VP: How did Glastonbury go ? I believe you nearly got strangled? What other festivals are you playing this year ?

MARINA: Oh they totally dramatised that! I just wrapped the mic lead around my neck. Hardly near death experience. I’m playing Bestival, Latitude, Camp Bestival, Under age, Get Loaded and a few overseas. Not many left to play now.

VP: You have a very interesting blog on your site in which you are pretty candid about how you feel, you certainly don’t pull any punches. You were particularly scathing about certain vapid female celebs describing them as “Vacant. Airbrushed. Empty. People. Getting. Paid. To talk. About fuck all…” Does the obsession with celeb culture irritate you?

MARINA: Well, we created our own monster here. I’m not so irritated anymore. I mean, that quote above was written almost 2 years ago. I’m a very different person now to how I was back then.  We’re all privy to lolling about over some sensationalised pieces of celeb news from time to time. I don’t think it’s the worst thing in the world but I certainly would like to avoid becoming that type of person. It gives you nothing only takes. I just feel the celeb world is very unhealthy and I do not want to be like those people nor live their lives just because I am headed for show business.

VP: You’ve also said that record labels are so obsessed with acts producing an album containing twelve potential number one singles that they “actually forget that there needs to be a tiny bit of soul in the music “. What sort of music inspires and moves you?

MARINA: Honest music. Music that is creatively risky. I like musicians who genuinely don’t care about what a song will do for them/ their label/ their fans. They just write it for the love of writing it.

VP: Is it true that 14 record labels were all vying to sign you up ?

VP: As mentioned, you blog a fair bit, although you admit you have quite an ambivalent attitude to blogging, what do you make of all this social networking malarky.  Is it a great way to meet like-minded people from all walks of life?  The Daily Mail, in their usual understated style have actually claimed facebook can cause cancer( link here)  !…. However health risks aside it must be a great tool for  helping upcoming musical artists connect with a bigger audience..?

MARINA: Oh definitely. As the ancient Greeks said.. “All in moderation”. As long as it doesn’t substitute normal real-life relationships then I think it’s a great way to communicate.

VP: What was the first single and album you ever bought?

MARINA: Eesh… I think it was Pretty Fly by The Offspring. And Alisha’s Attic was my first album.

VP: Five words to describe Marina And The Diamonds ?

15 thoughts on ““Shine On” – Marina And The Diamonds Interview”