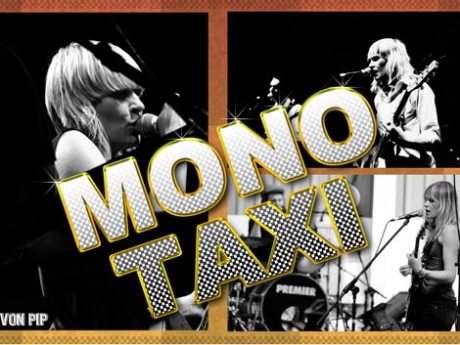 “How You Gonna Feel About This” By Mono Taxi

There have been a number of bands who, over the years have experienced the giddy pleasure that can only be induced from having the word “Mono”in their collective moniker. This elite bunch include Mono Stereo, The Mono Lps, Mono, The Monochrome Set , Mono In VCF and Liam Gallagher’s new band, which if you follow the smart money, will be almost certainly be named, “Mono-brow.” You can now add Anglo- French duo Mono Taxi to that ever growing list of “mono-philes”.

The nucleus of Mono Taxi comprises Yorkshire-born chanteuse Ellice Williams, and French-born Antoine Collin who have a real D.I.Y. ethic, they make their own artwork, cut each other’s hair, get friends to take photos and create their own lo fi videos. On their latest single “How You Gonna Feel About This” they take the best of 90’s guitar music (Belly, The Breeders, Throwing Muses, Sonic Youth) give it a light coat of pop varnish and produce a sound that is powerful ,melodic, full of energy, and infused with joie de vivre. It certainly makes a welcome change from the 80’s keyboard revivalists whose quirky charms are starting to wear as thin as Cheryl Cole’s legs. It’s also rather nice to hear a song that hasn’t been subjected to ‘death by overproduction’, one that gets back to basics and captures the spirit of spontaneity, which is of course, so often at the heart of all good rock n’ roll. Mono Taxi is due to release their debut album in April of this year (that’s 2010 for those of you arriving at this page from the future-how’s it looking? ) and it promises to be an intriguing affair. We had a word with the band, tried to deduce what a Mono Taxi actually is and were delighted to find that not only did we share a love of the same music, but we also shared a mutual mistrust of a certain Eton toff 😉

VP: When did you meet and what inspired you to form Mono Taxi ?

Antoine: We met in Paris in 2003. We were waiting for a cab at Gare du Nord and met in the queue. It just happened we were both going to Bastille and so we decided to share a taxi. We exchanged numbers once arrived in Bastille and started the band the following week.

VP: Where did the name come from?

Antoine: Two reasons why we chose Mono Taxi : the first one is because we met in a shared taxi in Paris, the second is that it means “Beautiful Taxi” in Spanish.

VP: Your new single “”How You Gonna Feel About This “is about to be released and I believe your debut album is out in the near future, did you enjoy recording it?

Antoine: We record everything in our basement flat in Shepherd’s Bush so it’s always lots of fun. We transformed the corridor cupboard into a vocal booth, which sounds great but lacks a bit of oxygen after a few takes and can make you feel very dizzy if you don’t open the door every now and then. You can also just about fit in with a guitar but you have to keep the neck slightly angled up which can give you cramps at times. The living room has dozens of instruments that we have accumulated over the years including our latest find, an electric blue 1930’s piano which says “As used by Princess Elisabeth” with the English crown symbol next to it (but it looks way too sexy to have ever been used by the queen). Our debut album is out in May and we’re just finishing it up as we speak. It’s been a long time in the making, we’ve had some real joyful and awful moments making it and overall it sounds a lot better than we ever expected it to.

VP: You’ve been compared to 90’s bands like The Breeders and The Pixies with a popper edge, which bands would you say have influenced you.

Antoine: We love The Breeders and The Pixies ! American alternative music of the early 90’s definitely has a big influence on our sound although not everyone necessarily hears it as we do have a popper tone. One day we will make a proper dirty album though, promise.

VP: Many musicians tell stories of musical epiphanies, whether it was fist hearing Hendrix or The Pistols etc , defining moments when the suddenly realised “yes ! I want to be a musician” . Did you have such a musical epiphany?

Antoine: I remember seeing Dinosaur Jr in ’93 (shit, was it really 17 years ago ?), for the ‘Where You Been’ tour. It was my first gig and it left me both filled with wonder as well as deaf for a few days. The next day I went to Camden Market to buy my first guitar. £20.

Ellice: The day I got a keyboard for Christmas when I was 7.

VP: What’s been the strangest gig you’ve played so far as a band?

Antoine: Not really played strange gigs. Should we have? we played memorable gigs and miserable gigs but they were never strange as such. Maybe this year?

Antoine: Our next single is out soon. We’ll be touring France, Spain, Portugal and the UK in May and June. Our album is out in May. Then the summer festivals and then we’ll start working on our next album in October (with that Princess Elizabeth piano, of course).

VP: What were your favourite albums of 2009?

Antoine: The re-release of Spiritualized’s Ladies and Gentlemen We Are Floating In Space, Yeah Yeah Yeahs It’s A Blitz.. Really liked the new Raveonettes too, with its euro-pop angle.

VP: I have a musician friend who once got so angry at the manufactured dross that is constantly playlisted on the big radio station’s that he threw his radio out of the window, is there are particular style of music that would induce you to do the same?

Antoine: We’re quite open to every style of music really. It’s more the people who make it that can be really irritating. We have to agree with your friend though, 95% (if not more) of what’s playlisted on major radios is stupid music played by stupid people but hey, are they not all signed to stupid majors in the first place ?

VP: Five things that would make 2010 a year to remember would be ……

“The Sound Of You” –Mono Taxi