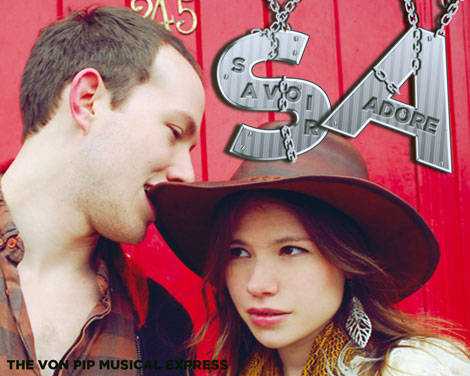 Rarely does a band arrive on the scene as fully formed as genre bending Brooklyn based duo Savoir Adore.  However the band apparently formed completely by accident when multi instrumental friends Paul Hammer and Deidre Muro challenged each other to write music purely for their own enjoyment. With their début album “In the Wooded Forest” they have perfectly captured that free spirited sense of adventure, spontaneity and fun combining a vibrant and eclectic mix of songs and styles that aren’t confined by genre or constrained by pretension. “In the Wooded Forest” is a veritable smorgasbord of musical goodness, a pulsating joyous celebration of sound that is  experimental and embraces many different musical styles but still works supremely well as a cohesive whole. To call it something of a triumph is in no way overstating  just how good this magical album is.

Savoir Adore have offered up a richly diverse and hugely enjoyable debut that takes the listener on a magical ride and sparkles like a musical gem amongst the current crop of contrived and overproduced detritus that is currently poisoning the airwaves.  Released on the same label which helped launch the likes of MGMT, Violins and Bear Hands it looks like Cantora Records have unearthed yet another indie jewel.  This is certainly an album that will feature on the high end of the scale in the VPME’s end of year favourites

We had an enlightening chat with the duo to discover how exactly one goes about accidently forming a band!

VP: You’ve stated in the past that Savoir Adore is an accident, that you had never really intended to start a band …so what happened?

PAUL:  Savoir Adore started as a challenge between Deidre and I to write and record an EP in one weekend, we had no idea what would come of it! We had played a lot of shows together but we thought it would be fun to break out of our respective shells and write something different together – we ended up recording “The Adventures of Mr. Pumpernickel and the Girl with Animals in Her Throat”. The EP got passed around and eventually we got encouraged to perform live and then we ended up signing with Cantora Records. The fact that we became a “band” in a traditional sense – playing live shows, touring, etc. was a total accident and a wonderful surprise!

VP: Yeah that  first EP the curiously titled The Adventures of Mr. Pumpernickel and the Girl with Animals in her Throat’ , was apparently recorded over one weekend as a “concept” EP- what was the idea behind it?

PAUL: It’s an interesting story; there are a lot of layers to it. “Mr. Pumpernickel” and the “Girl with Animals in her Throat” were actually nicknames that we had given to each other. I had a tweed coat that I wore my junior year of college – hence the Mr. Pumpernickel and Deidre used to have “Animals” in her throat in the morning. I also used to send Deidre ridiculous email messages with crazy names that she used to save. Things like “Your Tuna Ain’t No Substitute for Love”, basically just wild, fun stuff. We sort of approached the recording process with a similar openness. We really wanted to explore our imaginations, thematic material that wasn’t explicitly personal. So on our train ride up to the studio we came up with titles for all the songs we would work on. It was obvious that there was a fantastical, fairy-tale like quality to the ideas… but the story wasn’t written yet. As we experimented with different sounds and musical themes in the studio, the narrative naturally developed.

VP: And now you have a full length album “In The Wooded Forest”  how did you set about recording this? Did you take your time or do you tend to record songs quite quickly?

PAUL: It really varied from song to song. ‘Early Bird’, ‘MERP’, ‘Scientific Findings’, and ‘Farewell My Love’ were all written in a day. ‘We Talk Like Machines’ was written over several weeks of layering ideas and passing them back and forth. For the most part, the recording process itself was quick though, we tend not to labour over ideas, there’s something very special about that first time you perform something. I think that vulnerability and excitement comes through in the final product.

VP: How do the two of you go about song writing do you write separately? Together? What’s the process?

PAUL: The process has varied over time. However, most of the songs on the record began as a result of the two of us getting into the room, picking instruments, and trading off ideas until we came up with something that felt right. From there, we’d develop the song together, often using the recordings we captured from the very first moment of inception. It’s really exciting to capture an idea immediately as it’s being written. A lot of our songs, like ‘MERP’ and ‘Scientific Findings’ for example, were based off long loops that we recorded in the moment. Later in the process, there were also some songs that we passed back and forth, writing parts separately. But all-in-all the record was very much an even collaboration.

VP: Your music seems to very eclectic and genuinely different from many contemporary bands. Is it representative of your own musical tastes? Who would you say are your influences?

PAUL: I do think, to some extent, it’s a result of our musical tastes – especially the fact that Deidre and I have very different musical inspirations. Our influences really run the gamut – we both grew up on a lot of classic rock and pop as well as jazz and classical. I listen to a lot of alt country like Ryan Adams and Red House Painters while Deidre listens to a lot of 60s pop like the Zombies and France Gall.

I think over the years we’ve also taken inspiration from many different elements of the music we listen to – the counterpoint and part-writing of Bach, Bill Evans… the dynamics of bands like Sigur Ros and Arcade Fire, the emotion and power of Robert Johnson or Jack White… It’s really like a mad chemistry experiment of inspirations when we get into the studio together, we’re often not sure what’s going to happen… but we like it that way.

VP: What parts of music making do you enjoy the most, writing, recording touring ?

PAUL:  We definitely enjoy them all equally for different reasons. It’s the ability to balance all 3 that makes us happiest.

VP: What are you plans for the rest of the year ?

PAUL: We’re going to be recording new songs for the next couple of months, and hopefully another trip to the UK and Europe in the fall (and a tour in the United States). Also, we’re very excited that the album will finally be available worldwide August 16.

VP:  You’re both described as ‘mutli instrumentalists’, what instrument did you learn first and what’s your favourite instrument?

PAUL :  I learned piano and drums basically at the same time when I was 5 or 6. My favourite instrument is probably the bass though.

DEIDRE:  I was singing all the time, ever since I physically learned how to.  The voice is probably my favourite instrument as well.

VP: The internet, is it a friend of music or it’s enemy?

PAUL: Oooo, the internet can be friend and an enemy of music. However, it’s more of an enemy to the traditional model of record labels than music itself. The music industry just needs to continue to adapt to best integrate and utilize the internet. And for bands at our level, it’s entirely a friend.

VP: Five words to sum up your musical ethos ….