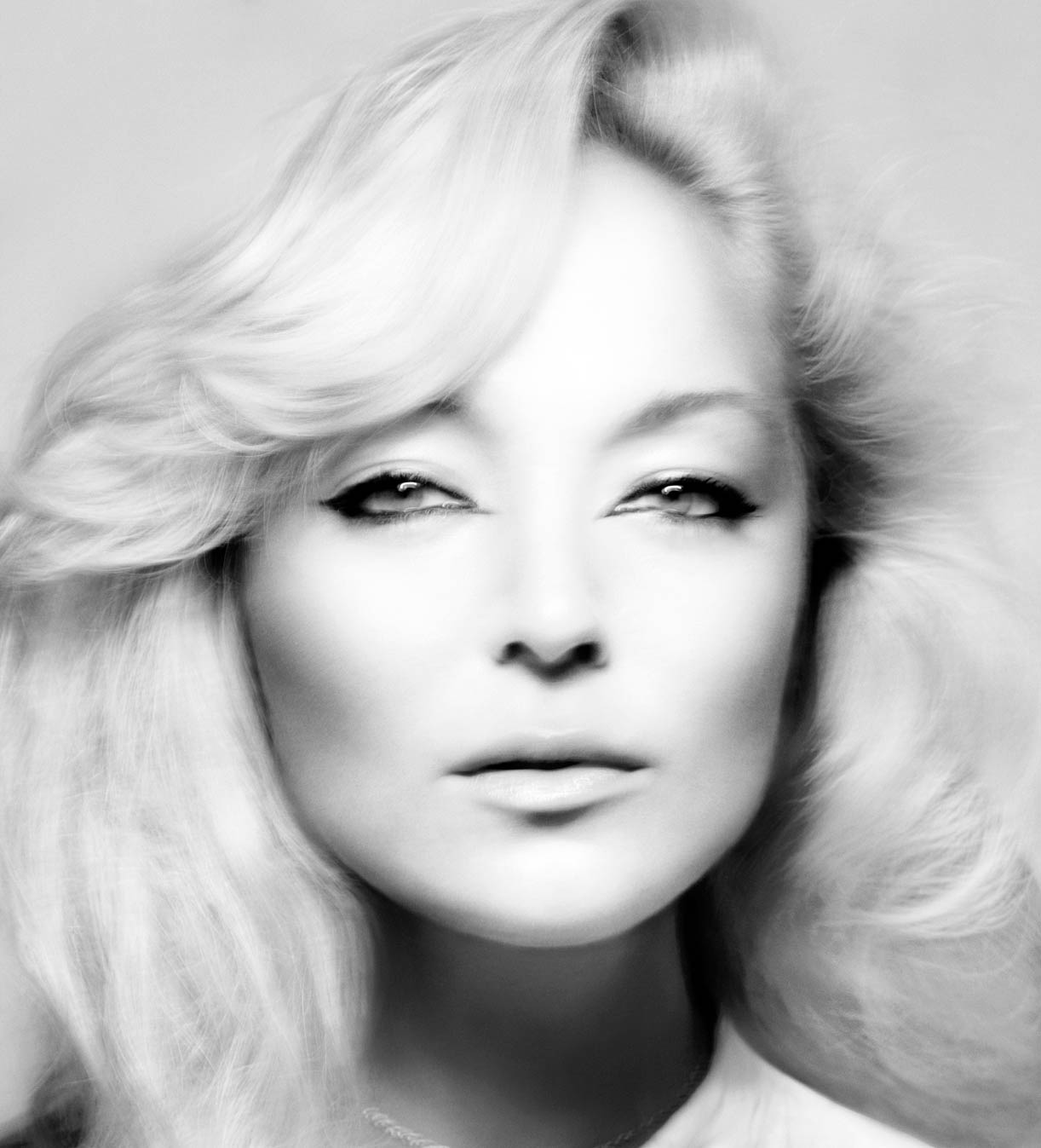 Polish electro pop artist Pati Yang has enjoyed huge acclaim in her native land and now looks set to win the hearts and ears of the more discerning UK music fan who possibly demands a little more from pop music than the woeful formulaic nursery rhymes that dominate the charts.  Her oeuvre may not be entirely new to listeners in Blighty, as Pati has previously achieved a degree of critical success here in the shape of her former band Children and with the experimental art/triphop project FlyKKiller.

Her childhood was spent travelling with her Fathers punk band whose subversive anti-regime message meant that there was always the constant threat of the dreaded knock at the door in the middle of the night from the secret police.  At 16, she arrived in London to study music and upon returning home, she soon became a major player within the Polish artistic scene.  As well as her music, she is a published poet, visual artist and a hugely influential radio DJ in Warsaw.

2012 has seen her launch her solo career in the UK with the release of the “Wires and Sparks” EP which included a quite epic reworking of the title track by Jagz Kooner.  Now ahead of her first full solo UK album a second EP “Hold Your Horses” is due to drop on 17th of September.  It’s filled with soaring wide screen electro pop that manages to be literate, uplifting, and conversely melancholic possessing the sort of emotional depth that a lot of modern pop seems to be lacking.  She also proves, as did Danny Boyle (but sadly not Kim Gavin) that modern pop music (and indeed pop culture) doesn’t have to be reduced to the lowest common denominator.  It can be accessible, entertaining, danceable, and intelligent.

We spoke to Pati about her life and her music

VP:  Hello Pati, you’ve been performing and writing for some time now and are currently working on your fifth solo album and the first full UK solo release.  What can we expect from the album and why has it taken so long for us in the UK to get a full album?

Pati: Every album is like a chapter in life, looking back, I’m not sure why it’s taken so long but obviously timing wasn’t right or I wasn’t ready.  I’ve been waiting for other people to make decisions for way too long, bounded by various deals etc.  Ultimately, I think I had to take time to get grounded and learn to listen to the gut feeling.  And it just started rolling.  I’ve written the songs now and I am at a point of forming a sound picture in my head.  I am over the moon to be working with Jagz Kooner and I invited a few amazing musicians to guest on it , if it’s going to sound anything like I imagine , it will be like swimming naked at night on a sugar rush.  Frankly speaking, I don’t know what to expect myself!

VP:  Ahead of your album comes your second EP “Hold Your Horses” you’ve said the title is a “feel good track but without the feel good in it.”  Can you explain?

Pati: You know, to me it feels like quite a healthy sounding, charged record, but when you listen to the lyrics they sort of contradict the vibe.  So it’s like smiling through tears.  I think I am generally hooked on the bittersweet combination.  There was always a pop element in my writing, but working on film scores informed my way of composing and the stuff I listen to is mostly experimental, classical, or timeless.  This is what I look for in music myself, timelessness and honesty and it’s rare to find those qualities in what’s considered current pop music these days.  I think the best records must be made in a kind of a blind state, you only know what you made after it’s out there, too much thinking defies the object.

VP: As a child you spent a huge amount of time on tour with your dad’s Punk band, who were highly political, and took risks to spread their message,  Did this kind of upbringing mean you were always going to be drawn into the world of music and empower you to not be afraid to take chances?

Pati: I didn’t think I was going to follow in my dad’s footsteps until I was 14 and started writing songs.  I didn’t think I had a voice to sing.  Besides, those were crazy times, the censorship, the regime, living within a bubble of the art community while going to school on the “outside”  It’s true that I generally feel quite fearless, I’d be long dead if I didn’t have the level of courage bordering with stupidity sometimes.  But I am in an outsider at heart with a sort of allergy to the word “system.”  I’ve been through and seen enough of helpless scenarios to know that nothing is impossible.

VP: You’ve already got an impressive musical CV, signing a record deal at 18, winning awards in Poland, touring with Depeche Mode, forming the critically acclaimed Children and working on movie soundtracks ad well as collaborating on FlyKkiller.  I suppose two questions stem from this, firstly, when do you sleep.  ;) Secondly, what have been your highlights so far?

Pati: I think I was just very lucky to have met people on my path who were my teachers and my collaborators.  To look back at the last 15 or so years and realise you can trace back the way the times and music and people around you have been constantly changing – and why – is a blessing.  Some parts I can’t remember too well.  Either because of how good they were, or how bad.  Being alive and carrying on working are the highlights.  You never stop saying thank you.  I’ll put it in a book one day.

VP: Your previous EP “Wires and Sparks” was your first solo UK release and was universally praised, as was the Jagez Kooner remix of the lead track.  When it comes to remixing how does it work, do you contact the remixer or vice versa?

Pati: I put it out there and see what comes back and I am always open to whatever comes my way.  I love working with people who are as excited about it as I am, great things are born out of honest energy, and I value that a lot more than name hype.  When Jagz came on-board I was thrilled, and I’ll never forget hearing what he did for the first time.  I was driving down a highway in Los Angeles in full sunshine heading for the airport to catch a flight to London and I just started singing at the top of my voice in excitement when I heard it, I must have looked completely nuts.  So it was with The Autokratz remix, they’ve done a killer of a dance beast and we just clicked, there was this aura of excitement about it when it was happening.

VP:  What sort of music do you listen to yourself?  Who would you say have been your major influences?

Pati : I listen to a lot of experimental and classical stuff, music concrete, Phillip Glass, Henryk Gorecki, Arvo Part , Hungry Ghosts , Krautrock, new and old electronica, and of course UK  has always been a cradle of seminal bands  , anything weird and anything timeless.  I love great songs, Simon & Garfunkel, Bob Dylan, The Beatles …  I could go on…  after seeing “In search of the Sugarman” I fell in love with  Rodriguez again , I remembered when David Holmes introduced me to that record years ago and his band, The Free Association made a brilliant cover of it .  I still have it on vinyl, such a rarity.

VP: Since leaving Poland you’ve travelled around the world, lived in New York and are currently based in London, is there a particular place you’d call home.

Pati: Planet Earth, as I’m not from here really.  I never felt like home here for the past 30 years, so to call Earth my home for now is a major achievement.

VP:  How’s 2012 treated you and what are your plans for the remainder of the year?

Pati: Hands down, this has been the best year I’ve ever had.  Magical and empowering, I spent winter in LA which was mind blowing , I studied some eye opening stuff in a few incredible and  sacred places and I’ve written two projects .I am excited about what future holds.

VP:  What has been your strangest experience since you started writing and performing?

Pati: When I was five, I was that cute witty kid at my prep school, singing my dad’s political songs to the audience of 5 year olds and quoting the tour bus catch phrases, which made everyone laugh to tears on tour, but made the teachers at school slightly worried to say the least.  So when there was some big deal national school festival they took a risk and chose me to represent my school.  I walked out onto the stage in front of 2000 kids and teachers and I was so amazed by the stage – audience energy exchange I just stood there in silence for 10 minutes looking at them and then left.  Until this day, I don’t know why I did that but it was fun.

VP:  Five words you could use to describe your music to an extra terrestrial.

Pati: You wouldn’t need words for that.