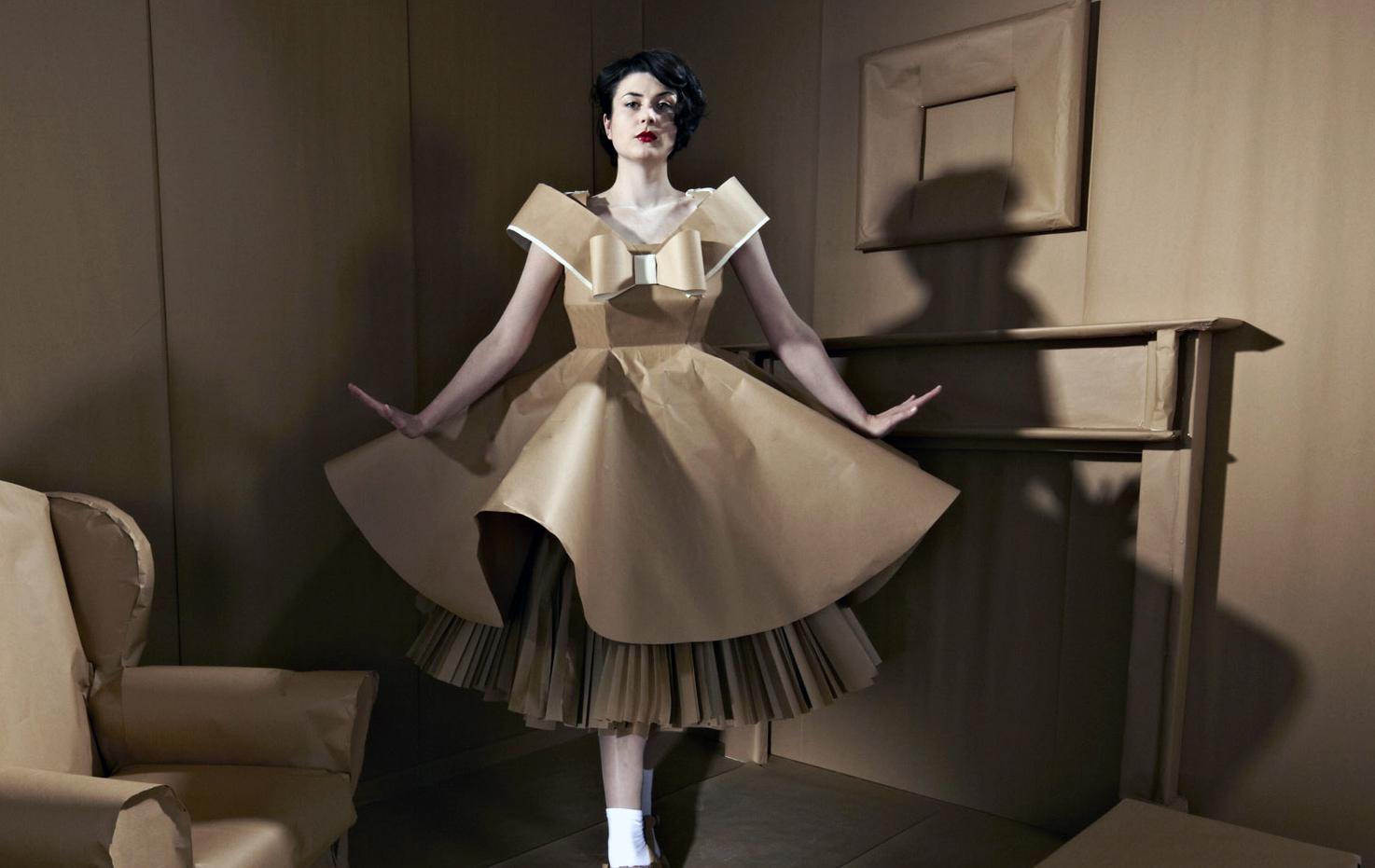 We initially discovered Jennifer Left early in 2011 when we stumbled across her sublime cover of the New Order classic “Temptation.” Her stripped back acoustic, bossa nova version really seemed to get to the heart of the song laying bare the genuine depth of emotion, communicating the yearning, the regret,and ultimately the optimism – “a heaven, a gateway, a hope.” It was quite clear she’d covered the song, not to denote her excellent musical taste, but because she had an emotional connection with it, she got it, possibly lived it and at the risk of sounding like a facile, clichéd talent show judge – she made it her own.

Originally from Newcastle , Jennifer now resides in Brighton and her début single release “Black Dog” backed by “Hushabye” showcases her ability to write darkly compelling, seductive music of depth, beauty and intelligence. Her sweet sonorous vocals lend a veneer of fragility and innocence to proceedings, yet just beneath the surface there seem to be darker themes at play. Off kilter fairy-tales meet “swing noir” conjure up a warm mist of nostalgia bestowing her music with a timeless quality in which light and shade are constant companions as she draws you into a world where things are not  quite all that they may first appear to be.

She’s been working on her  début album collaborating with Brighton-based producer Tim Bidwell (Kate Walsh, Fink, Lucky Jim & Peggy Sue) with help from Ewan Wallace (guitar player with Ninja Tune’s award winning artist Bonobo.) Being naturally inquisitive types we wanted to know how things were progressing, and so we chatted to Jen and cunningly extracted the following information ;)

VP: .Hello Jennifer,  we’ve only recently twigged that we’ve actually caught you live with your previous band up here in Liverpool a few years back . When did you start work on a solo project?

Jennifer : Ha Ha.. sneaky sneaky.. that will be correct. I have played in Liverpool a few times hiding behind the bass. I think I started with the solo project with Tim and Ewan just over a year ago.

VP: Your début single “Black Dog” is released on  4th June. Was picking your first official release difficult and what was it about this track that made it the choice for first single?

Jennifer : For me Black Dog was an obvious choice. It was the first song I had written and it’s about my sister so it has sentimental value and I think it stands up well. It has so many little bits of detail to it musically, whether it is the bass, the glock, the whistling, the lyrics. I think of it as a nice dark little tapestry. kinda like: this: http://crossstitch.about.com/od/variousholidaypatterns/ig/Beware-of-Zombies-Gothic-Chart/Beware-of-Zombies.htm – It’s a nice little craft but it’s a cross stitch picture of a zombie.

Black Dog is all nicey nicey on top, but lyrically its darker. But don’t let me confuse you… it’s not about zombies… you still with me?

VP: When we first  heard “Hushabye” our first reaction was along the lines of   “oooh what a lovely song”  but then we saw the video, which is fantastic, but much darker than we’d possibly anticipated . There’s a touch of “Night of the Hunter” about it, in the” protecting  innocence from  darkness” kind of sense, almost like a dark fairytale… what was the idea behind it? Is it a straightforward visual representation of the song ?

Jennifer : The song is actually about a girl who is in love with a boy, and she really wants to tell him, but she is too scared, so she waits until he sleeps to tell him.

A little bird perched near by hears her sad little love song and goes off into the forest and repeats her sad song.

The song is soaked up into the trunk of the tree…

When the instrument is played is sings her sad love song

Her secret is no longer secret and the boy finally finds out….

It is part truth…big part fable from my childhood.

When I first heard the instrumentation it reminded me almost of a music box….It was never meant to be as dark as the video ended up being, but the Director Ben Hilton ( very talented chap – check him out he does alot of different films etc) and I seem to have a very similar attraction to the macabre. I like it!

VP: And “Hushabye”  is of course the title track from your début album , any news on a potential release date yet, how many tracks etc ? ?

Jennifer : We haven’t discussed an exact date yet.. One step at a time I think..there are some tracks that have not made it on there, that actually probably should be and I am still currently writing, so although there is an album there, maybe a little switcharoo might take place…..who knows!

VP: The first song we heard  was your spectacularly lovely cover of New Order’s “Temptation” which really brings out the beauty of the song. What drew to that song in particular?

Jennifer : Every Thursday during 6th form I would go to Stone Love in Newcastle, climb up on the podium and dance around in circles to that track..I simply love it. It has such a bounty of sentiment to me.

VP: There’s a warm, nostalgic tone to your music juxtaposed with dark themes, your  official Facebook page states  ” Inspired by the songs that raised her,” so who are your influences ?

VP: We have to mention the amazing “paper photoshoot” who came up with the concept, did you literally have to cover everything in paper, and who designed the dress ( somebody called “Russell” perhaps?)

Jennifer : Wha wha whaaaaa.. nice. I do like a good joke! The idea was mine I’ll have to say. It had grown from the track Paper Trails… I make lots of little things out of paper and leave them around the house for my boyfriend to find….I came up with the idea of finding someone to make me a paper dress and I would be in a scene completely wrapped in paper. I asked Emma from Ophelia Fancy http://opheliafancy.com/ to make it for me… very talented lady!

Jennifer : Crikey…..to get on the radar I suspect and get the wheels going…keep writing and evolving….xxx

VP: What’s been your strangest experience since you started writing and performing music ?

Jennifer : Good question…you know what is going to happen I am going to answer this and then it will pop into my head late….

1) Sarah Blasko ( who I LOVE) coming up to me after my first gig and saying she really enjoyed my set…that was pretty insane.

2) Commissioning the unhinged chap who sits in the laines of Brighton to make 40 origami swans for gig in London in October…Its hard to picture. Let me know when you come down to Brighton and I’ll show you the man who lost his mind on Origami. 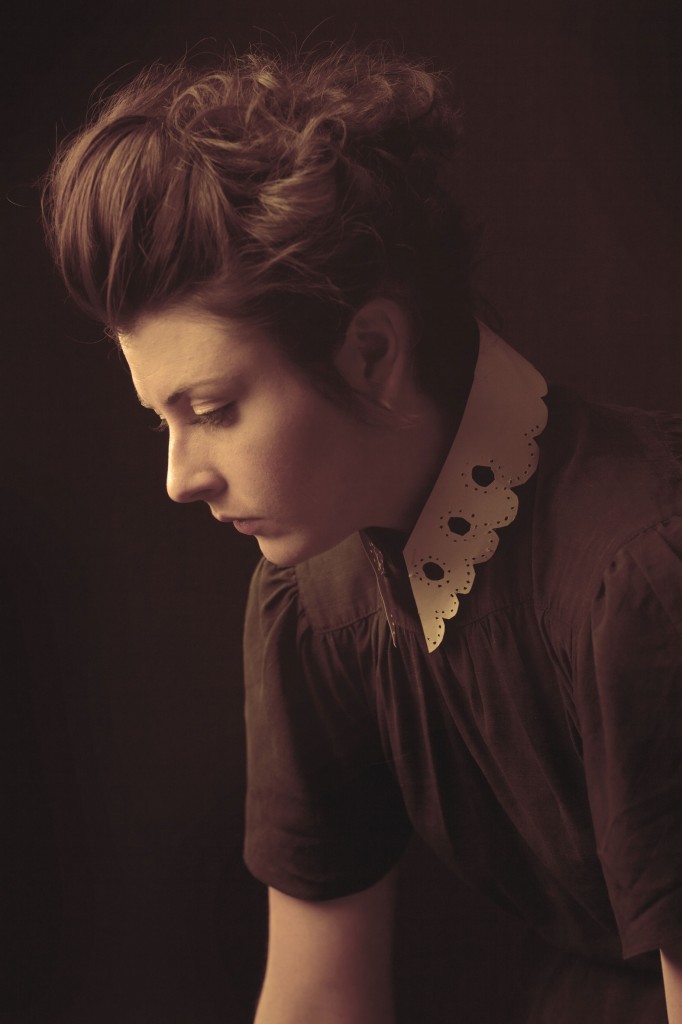 2 thoughts on “The Future Of The Left – Jennifer Left Interview.”