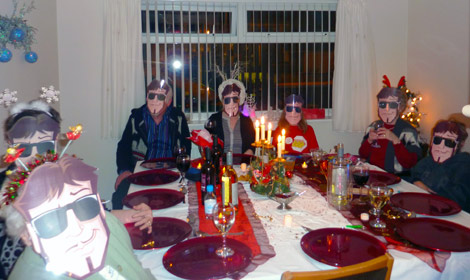 Hope you all had a good Christmas. Me ? Well it’s lovely of you to ask  but I’ve been rather ill , what with one thing and another and  this dreadful flu that’s been sweeping the nation, oh and hurting my finger trying to get the latest School of Seven Bells CD out of it’s beautifully packaged, yet rather impractical box.  So I’ve not really managed to write anything coherent of late,  although you probably won’t  notice much difference. I’ve also been debating whether the BBC Sound of 2011 is becoming counter productive, given the less than enthusiastic response it seems to be getting from certain quarters.  As for the winner Jessie J, well all I’ll say is, if  she’s ‘. . .the UK’s answer to Rhianna and Pink’ then we really are asking the wrong question.

Anyway whilst lying in bed with the flu after  feverish  hallucinations, one involving a particularly disturbing scenario featuring Billy Bragg , Sarah Palin and an otter,  I charged up the laptop and came across a new demo from The Good Natured which is absolutely gorgeous and just what the doctor ordered. She really  is a performer who I genuinely  hope will breakthrough in 2011. ( Actually I’ll have to find out if  The Good Natured is still a  person, or is she a band now or both.  Things like this confuse me and keep me awake at night.

‘Mountain’ By The Good Natured

‘Dilly’ is  next single to be released from their  album ‘Infinite Arms’ on Monday 14th February.  The video for ‘Dilly’, inspired by biker films of 70s, is pretty darn cool too.

Glastonbury  announce details of  their 2011 EMERGING TALENT COMPETITION, which will give new, unsigned musicians from the UK and Ireland the chance to compete for a main stage slot at this year’s
Festival.

For the 2011 competition, acts will be able to enter FOR ONE WEEK ONLY from today  Monday, 10th January until Monday, 17th January 2011 via an entry form on their official website, http://www.glastonburyfestivals.co.uk . Entries for ETC2011 will be FREE. To enter, you will simply need to supply them with a direct link to a web page where they can hear at least
one of your songs (MySpace, official site, YouTube, SoundCloud etc).

Right I’m off for some more Lemon based flu relief.