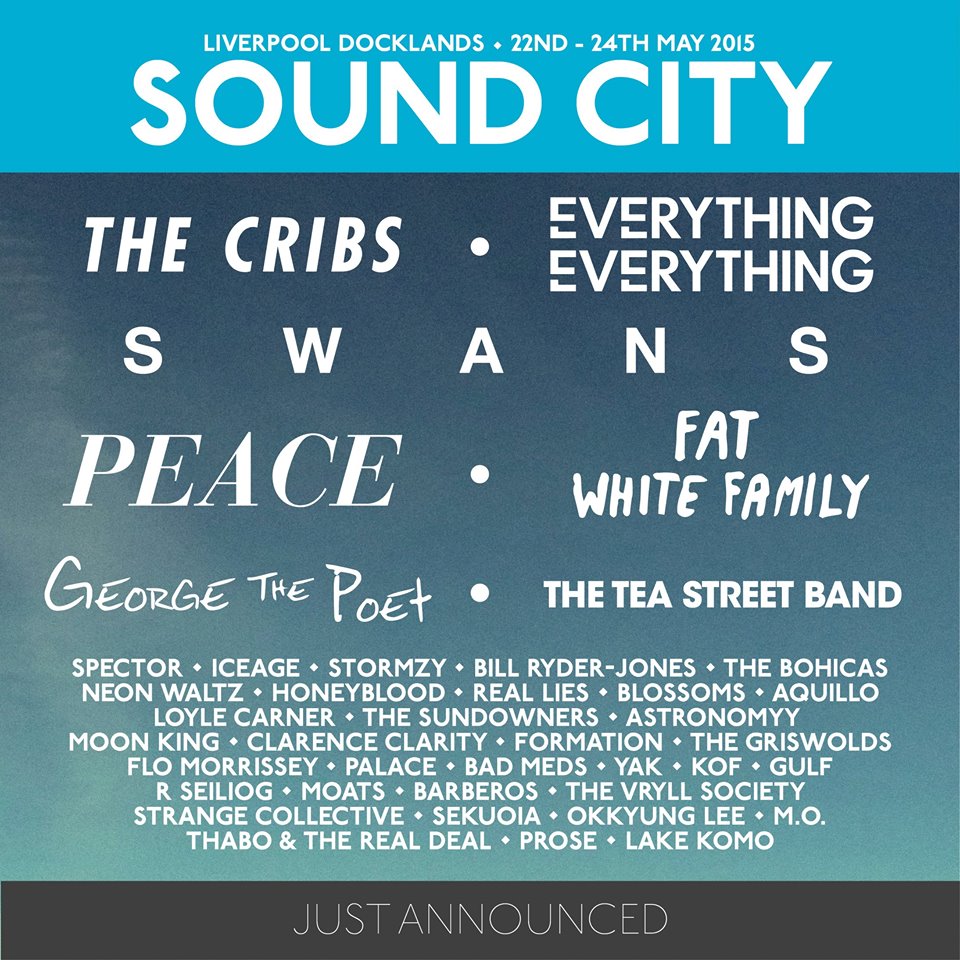 With the announcement of its second wave of artists Sound City has revealed its biggest bill to date with the promise of much more still to come.

The country’s largest city-based festival adds The Cribs, Peace, Swans, Everything Everything, Fat White Family, George the Poet and many more world class acts to the bill for this year’s festival.

Commented Sound City CEO Dave Pichilingi: “It’s a really big year for Sound City – with the move to our incredible new industrial home at Bramley Moore Dock we promised to create a bill that smashed expectations. We believe we have more than delivered on this promise.

“We have brought in some of the biggest names in the business this year from The Flaming Lips, Belle and Sebastian to The Vaccines and some of the acts we’re announcing today including The Cribs and Peace. We’ve also selected the very best of the scene’s emerging talent. You would literally pay three times the price of our tickets to see half the bill we have put together and we haven’t finished yet – we’ve still got a surprise or two up our sleeve. Our new model and approach will redefine the approach to metropolitan festivals and make us the brand to be imitated.”

Other acts announced in the second wave include Spector, Iceage, Stormzy, Bill Ryder-Jones, The Bohicas, Honeyblood, Aquilo, The Sundowners and Liverpool’s own Tea Street Band.

Following rave reviews for their new single Distant Past and eager media anticipation for their third studio album Get to Heaven released this June, Everything Everything are looking forward to supporting The Vaccines on the Friday night. Jeremy Pritchard, Everything Everything bassist said: “Liverpool has such a sense and conspicuous love of live music so we always feel at home there, we always have a good time and a great party. “In the early days of Everything Everything we always seemed to end up roaring drunk, sleeping on someone’s floor on Smithdown Road… It will be particularly cool to play at the new location on the docks, that kind of post- industrial landscape is always inspiring.”

Breathing life into a semi-derelict dockside is no mean feat so Sound City is working alongside STAX Creations, a team of visionaries responsible for designing some of the most incredible and recognisable festival landscapes in the UK, to help transform the Bramley-Moore Docks into an amazing post apocalyptic environment right on the banks of the iconic River Mersey.

Sound City is this year proud to be working alongside Liverpool John Moore’s University as the official Cultural Educational Partner. They are partnering on a number of initiatives including students from the LJMU Spatial Design Programme working with STAX Creations to deliver a unique festival site. This is a hugely innovative strategic partnership and forms part of Sound City’s commitment to offering students real life working experience within the festival and conference offer.

The bill so far includes:

The Vaccines • The Flaming Lips • Belle and Sebastian

Sound City will be announcing still more live acts and the additional conference keynote speakers in the coming weeks.