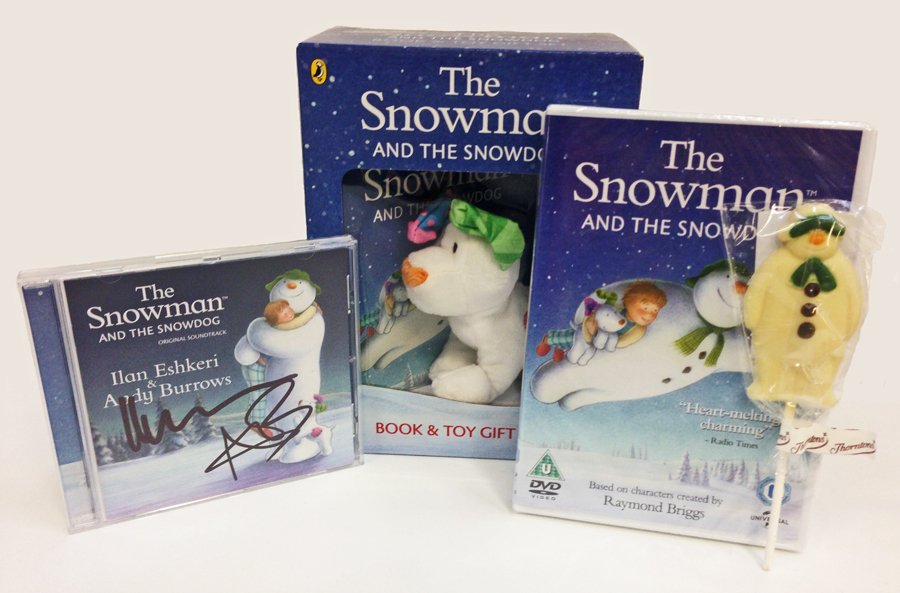 HAS HE BEEN YET????  Yeah here at VPME Towers we are unashamedly Christmas freaks. Miserable bitter cynics all year round but come the festive season simply show us some tinsel and a nicely decorated tree and we transform from Scrooge into Buddy the Elf.

And so as the season approaches we have a special pre-Xmas competition in which you can win “The Snowman” goodies, the animated classic which has become a staple of seasonal TV since it was first broadcast by Channel 4 way back in 1867.

To celebrate the release of Andy Burrows (ex-Razorlight) & Ilan Eshkeri’s soundtrack and upcoming live Union Chapel London shows for The Snowman and The Snowdog, we have  this prize to give-away

Q/ What is a Snowman generally made of


And send your answers to  [email protected] with “Snowman Comp” in the title line by 28th November.  First, one out of Santa’s capacious sack wins. Winner will be contacted via email.

Andy Burrows and Ilan Eshkeri will bring their BAFTA-nominated soundtrack to The Snowman and The Snowdog to life this December with a series of unique live-to-picture performances at London’s Union Chapel on December 12th, 13th and 14th, with evening performances each night, plus a special matinee performance on December 14th. ( tickets here – www.gigsandtours.com and www.ticketmaster.com (0844 811 0051/0844 826 2826) (Direct ticket link: www.gigsandtours.com/go/snowmanandthesnowdoggen) In this very special run of shows, Burrows and Eshkeri will first be joined by The London Metropolitan Orchestra for a unique live sound-tracking of the film, before being joined by very special guests for a set of classic seasonal and Christmas cover versions.  Union Chapel will be transformed for the occasion into a wintry wonderland befitting the occasion, and rumours abound that special guests at the show may just include a certain green hat and scarf wearing star…

The Snowman and The Snowdog (Official Soundtrack) by Ilan Eshkeri and Andy Burrows, meanwhile, was released by Play It Again Sam on November 4th. Recorded at Abbey Road Studios with the London Metropolitan Orchestra, the 60 piece ensemble was joined by a choir of Andy and Ilan’s friends and musical collaborators, and the score features piano from Tom Odell (whose debut album topped the charts earlier this year), violin from Haylie Ecker (former Bond member), guitar from Tim Wheeler (Ash), bass from Aristazabal Hawkes (Guilllemots) and drums from Dom Howard (Muse).

Last Christmas, 11 million people in the UK watched The Snowman and The Snowdog for the first time on the 30th anniversary of the Raymond Briggs-penned classic.  The Briggs-endorsed follow-up was created by many of the same team that first brought the much-loved original The Snowman™ to life, and the modern soundtrack by Eshkeri and Burrows underpinned the tale to magical effect.