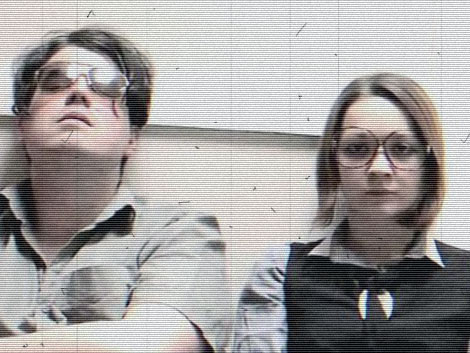 ‘I Am Koresh’ By The Indelicates.

Ok, so I don’t generally do musicals, all that  scripted ‘spontaneity,’ bursting into song at inappropriate times, ham-fisted lyrics and jazz hands a go-go, sorry but y’know, it just ain’t really my bag.  My prejudice has  been further reinforced over the years by being made  to watch cringe inducing student theatre after dating a drama student,  Ben Elton’s dreadful rock opera vanity projects, ‘American Idiot’ on Broadway and of course  the utter shitefest that is “Glee”.  I’m also deeply suspicious of the ‘concept album,’ the reason is really quite simple and can be summed up in two words,  ‘Rick Wakeman.’   I suspect anybody who has had the misfortune to  listen to something so fundamentally narcissistic, dim-witted and crass  as “Myths and Legends of King Arthur and The Knights Of The Round Table” will concur that you can actually feel your ears wither and your intellect recede when faced with  such utter tosh.

Given my introductory paragraph you’d think that when news reached me  of a band  set to  release a concept album based on the life of David Koresh and the Waco siege I’d run a mile.  Under different circumstances  that scenario is entirely possible , but the band in question is no ordinary band, the band in question is the Indelicates.  Their third album ‘David Koresh Superstar’ tells the story of failed rock star turned cult leader David Koresh in linear fashion based on the assumption that the persecuted messiah is possibly a tad  mistaken about his divinity. Of course to base an entire album on such a premise, not unlike the authorities handling of the actual Waco siege, could  go horribly wrong, but due to the intelligence of the narrative and the quality of the songs The Indelicates somehow pull it off.  It works as a piece of musical theatre, as a contemporary pop album but perhaps what makes it such an achievement is the fact that the story stays with you long after the album’s finished playing, leaving you with a very real sense that you have experienced the album rather than just listened to it.  There’s a very definite  cinematic quality; you can almost taste the Texan dust and feel the sting of tear gas which makes listening to ‘David Koresh Superstar” a genuinely entertaining and thought provoking experience. Hell, this is surely the musical that Quentin Tarentino was born to make, with Christian Bale as the charismatic, manipulative cult leader perhaps?

The album also features a number of guest stars including Carter USM’s Jim Bob, Lily Rae, David Devant & his spirit wife and Philip Jeays as well as  featuring Simon and Julia’s trademark intelligent word play and great melodies. It’s hard to pick out highlights as it all works so well as a whole, but if I  was trapped in a barn surrounded by armed officers from the ATF and forced to pick a favourite I’d probably have to go for ‘ A Single Thrown Grenade” which is strangely moving and encapsulates all that is good about the album.

Julia And Simon visited Waco and recorded the album in Texas funded by their own ‘pay what you like’  label, Corporate records, I asked Simon if he felt it vital to the whole project to visit the scene of the siege – ‘It felt necessary to go (even though there’s very little to see) but I don’t think we made any changes based on it. It confirmed my sense of what the air felt like – and you can really get how fast and awful the spreading fire must have been in that hot, Texas wind – and I was pleased that it didn’t make me feel like I’d got the tone of it wrong. The only real change we made on the basis of stuff we found out in texas was changing ‘blood group’ to ‘blood type’ on the advice of our Texan producer...’    It’s certainly an album that you feel could only exist outside of the mainstream, but is  there  a danger that people who are loud of mouth and short on logic could misinterpret the album? Indeed when the project was first mooted  The Indelicates  have , on occasion, received some  rather bizarre e-mails on the subject. I wondered if such misinterpretations  gave them pause for thought– Simon : “ I’m not saying I don’t worry about it, but there’s me worrying and there’s things we make – the two don’t cross over. It will bother me a lot if I get attacked, but that doesn’t even approach being a reason to do or not do anything.”

Simon Cowell knows  never to overestimate the great British public and it would of course be churlish and somewhat patronising for me to do the same. However my only concern for the album is that in the age of the single track download and dwindling attention spans I do wonder how people will  react to a concept album based on religious extremism, sex,  salacious media coverage,  a bumbling government, madness and death.  Again this would not be a reason not to do anything, because pandering to the mainstream gets you N-Dubz and Take That and this is an album that deserves to be heard.

For my part and there is no road to Damascus conversion here, I will still generally avoid musicals ( Aside from ‘My Fair Lady’ obviously) like the plague, I will yield to no-one in my apparently controversial view  that ‘Tommy’ is complete and utter piffle and will no doubt feel my soul contract when I hear Ben Elton is set to write  a  series of rock operas about the fall of the Berlin wall based on the collective musical output  of The Scorpions ,  Scooter and  David Hasslehoff .  However ‘DKS’ stands apart from these things, it is in some ways almost the  ‘anti-musical’  for it avoids many of the genres pitfalls such as  hysterical melodrama,   awkward lyrics and  mawkish sentimentality.    It is also unquestionably an artistic, musical and conceptual triumph  and whilst being born of the mediums we label as ‘the musical’ and ‘pop music’ it somehow transcends genres to become something else entirely.