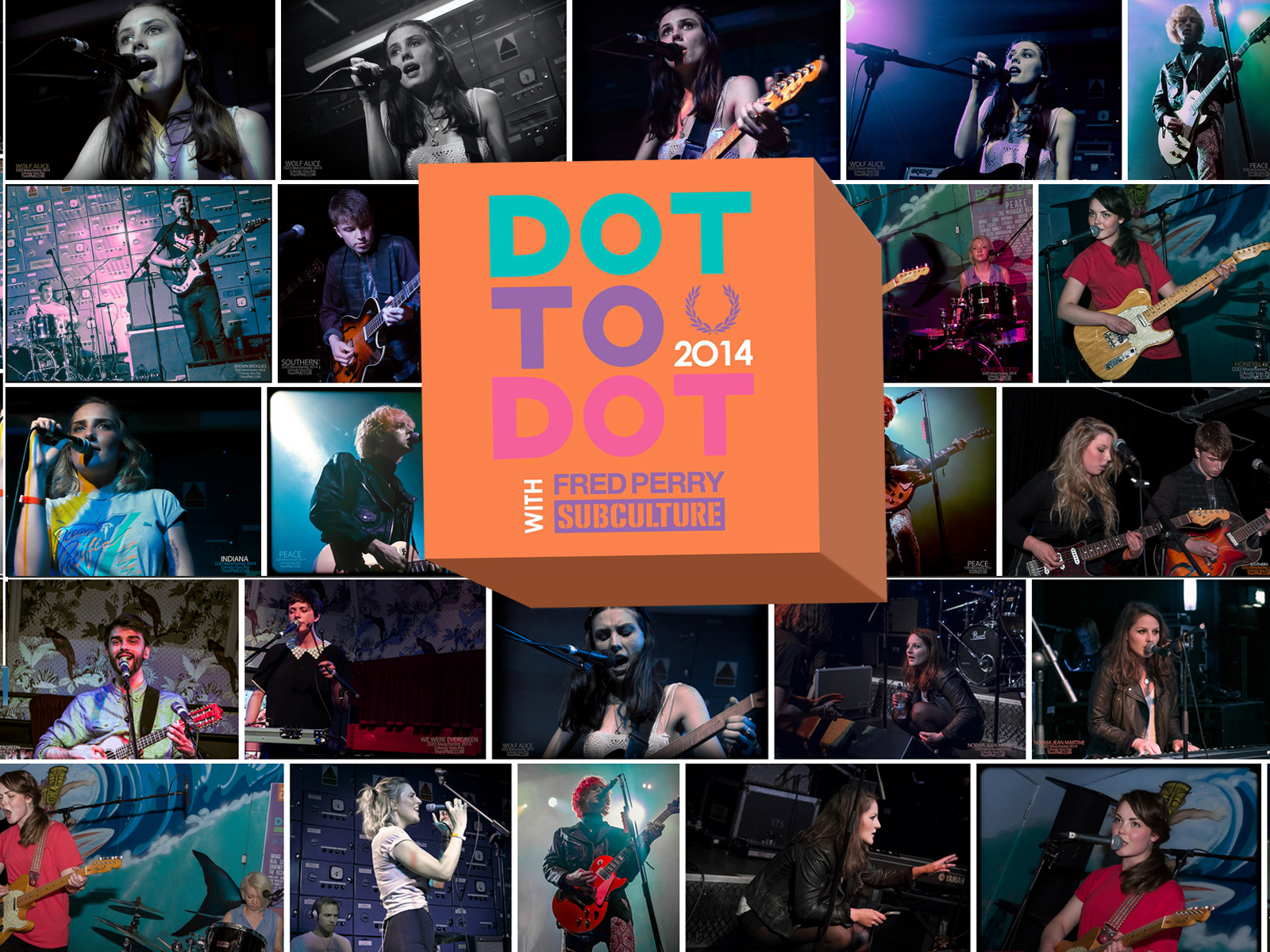 So it’s time to recap on another urban festival this time in the shape of The Dot To Dot festival which generally takes place during the late May bank holiday weekend over three days kicking off in Manchester on the Friday with the bands then moving onto Bristol before concluding in Nottingham. We took in the Manchester leg and tried to cram in as many bands as possible, and so without further ado you’ll find our highlights below (in no particular order.) 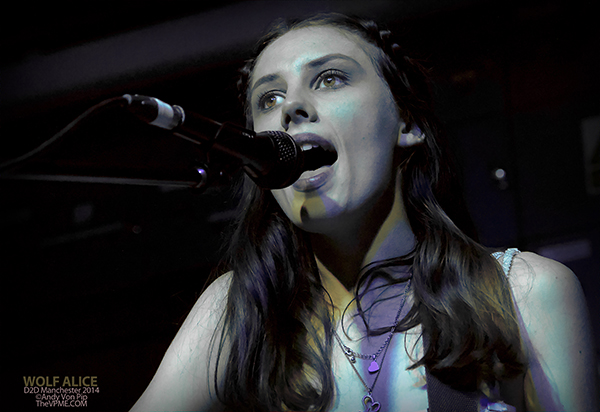 Wolf Alice can do no wrong in our eyes at present and this is very much a view that seems to be shared by critics and gig goers alike. Manchester’s ‘Gorilla.’ venue was rammed to its 700 capacity to see a band that has turned their early promise and blog buzz into something much more tangible. Hot on the heels of their game changing set at Liverpool Sound City Wolf Alice delivered another blistering performance featuring tracks from their latest ‘Creature Songs’ Ep in the form of ‘Moaning Lisa Smile,’ ‘Storm’ as well as ‘Blush’ which seamlessly segued into a cover of Chris Issack’s ‘Wicked Game’. This tune seems to enjoying something of a renaissance as Leamington Spa duo Coves also include it in their live set… So which version is best? Well being diplomatic (and truthful), we’d have to call it a thrilling high scoring draw. Wolf Alice guitarist Joff Oddie was the bands chief cheerleader tonight, dripping with sweat and intent on whipping the crowd up into a final frenzy. They closed proceedings with an incendiary version of ‘Fluffy’ as bassist Theo Ellis hurled himself into the crowd for a spot of surfing whilst the packed audience partook in some frantic moshing.

Wolf Alice have evolved into a fabulous live unit and if they don’t break on through this year we might as well all give up, turn the lights off and toss some rotting flowers on the grave of popular music. 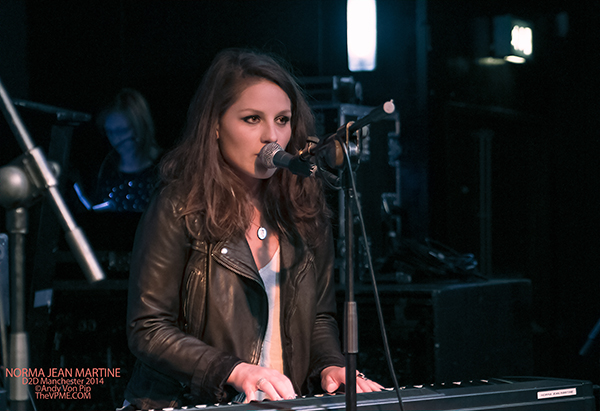 London based (via NYC and Nashville) singer-songwriter Norma Jean Martine has the sort of voice that surely marks her out as a future star. It has that powerful bluesy jazz tinged hue, the sort that can stop traffic, but minus the histrionics, which some singers often mistake for passion. Norma Jean’s music is polished, sophisticated but imbued with an emotional honesty which makes her performance a joy to behold. And armed with killer tunes such as ‘No Gold,’ ‘Game Over‘ and ‘Still In Love With You‘ it’s only a matter of time before that dreadful little hobgoblin dressed in a zoot suit, Jools Holland leaps forth across our screens like a demented Richard III and begins his dreadful gurning before introducing her on his TV show. After missing her at Liverpool Sound City we caught the majority of her set here …and suffice to say, we where totally enraptured. 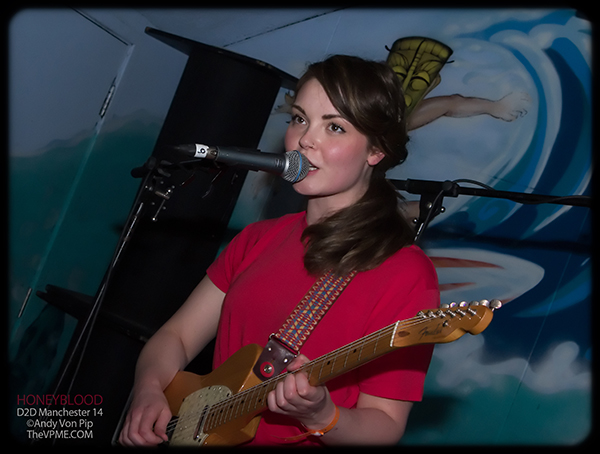 To be honest given the buzz Scottish duo Honeyblood have been generating we thought perhaps they may have been penciled in for a bigger venue. The Zombie Shack was slightly more capacious than Harry Potters cupboard under the stairs with possibly enough room to swing two cats. It was full (including amongst the assembled throng all four members of Wolf Alice) when Honeyblood arrived on the tiny stage which even for a petite duo looked somewhat cramped. Honeyblood didn’t disappoint with a crunching set of noise and melody showcasing tunes from their recently released debut album punctuated by some witty banter from singer and guitarist Stina. 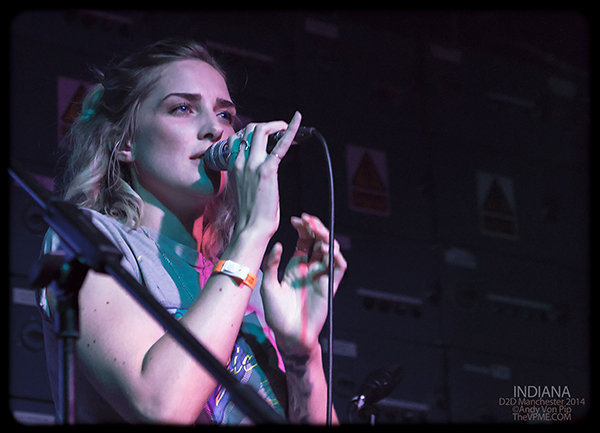 Dot to Dot, has over the years established itself  as being an excellent platform for rising stars with past performers including  Florence and The Machine, The xx, Laura Marling, Wild Beasts etc, etc. And we’re pretty sure Nottingham electronic/trip hop artist Indiana’s name will be added to that list in the very near future. To be honest she’s already made a  huge impact having recently played at Radio 1’s Big Weekend stage and Glastonbury as well as securing a major label deal. She cuts an implausibly glamorous and imposing figure on stage and based on the strength of her songs and power of her performance it looks like 2014 could be a massive year for Indiana. Her new single, rather aptly given it’s title ‘Heart On Fire,’ is apparently incomprehensible kiwi fruitcake Zane Lowe’s hottest record in the world, like RIGHT NOW! 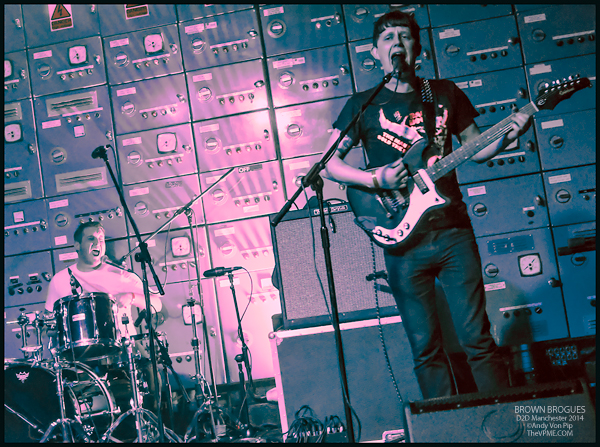 Now for something completely different we’ve featured Wigan garage punks Brown Brogues on a number of occasions on the blog, but had yet to catch them live. Although we couldn’t stay for the entire set due to the inevitable festival clashes we saw enough to make us want to catch the duo live again very soon. Front man Mark Vernon proved himself an amazing guitarist, which might not quite be apparent on some, their more lo-fi recordings. 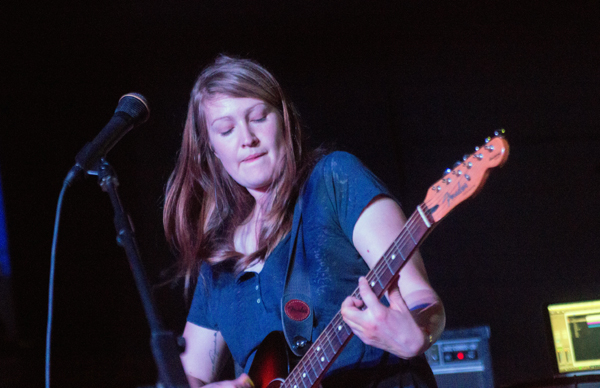 On record Midas Fall have an otherworldly ethereal shimmer with the focus revolving around singer Elizabeth Heaton’s jaw droppingly beautiful voice. However, live their sound has far more explosive sonic power and totally filled a venue that can only be described as resembling a less cheery version of Joseph Fritzel’s basement. Despite Midas Fall playing that difficult “early afternoon slot”, which being a weekday meant many would-be punters were still embroiled in the patriotic task of boosting GDP ( the panacea for all our woes obviously) it didn’t stop Midas Fall shaking the basement to its foundations with a performance of power passion and beauty. 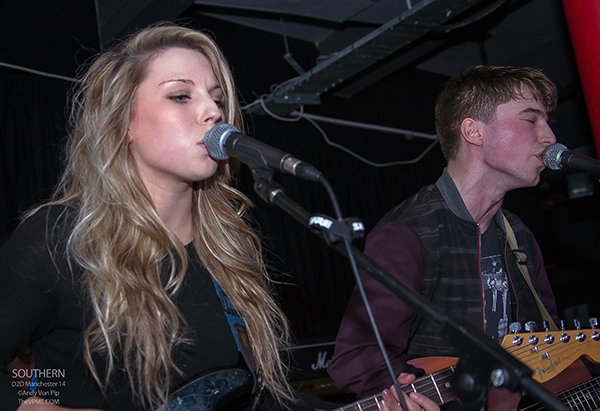 Belfast born Liverpool based Southern are brother and sister duo Thom Southern (vocals, guitar), Lucy Southern ( guitar, vocals).  It’s the first time we’ve caught up with them since we featured them back in 2012. And it was great to hear how their sound has expanded since taking an acoustic folky pop template and expanding it to include dirty delta blues riffing vibes. Combining sun kissed harmonies with darker lyrical themes it’s a compelling mix of indie, blues and rock with a sound that isn’t so much Southern as Deep South. The only surprise is Thom isn’t sporting an epic mountain man style beard whilst greedily guzzling moonshine. 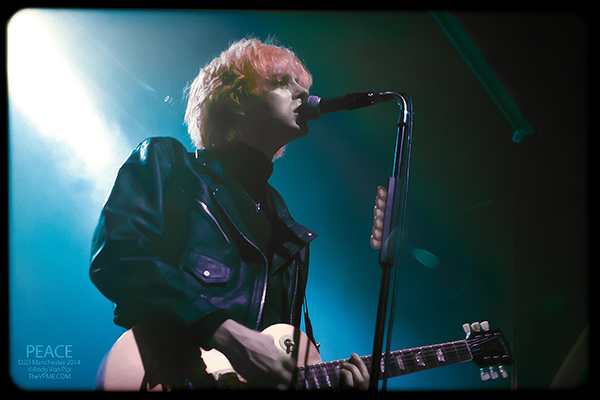 And so to the headliners Peace, a band who hadn’t quite grasped us by our musical gonads in perhaps the same way as the smitten audience who packed out the Ritz Ballroom. The proof of the pudding is in the eating and perhaps witnessing the band live would make our minds up once and for all? The first thing that strikes you about Peace is that they actually look like a band, and from the offset, it’s patently obvious that these chaps can certainly cut the mustard live. In fact, the sound is so good you’d be hard pushed to tell the difference between this set and their recorded material other than that it sounds even bigger and all encompassing. When faced with live versions of their songs such as the buoyant hook laden ‘Lovesick’ the hugely impressive ‘Wraith’ or the sexy swagger of their new single ‘Money’ arguments about Peace’s perceived lack of originality by gouty old naysayers seem somewhat obtuse, small minded and mean spirited.

We also enjoyed snippets of sets by Shauna Mackin, 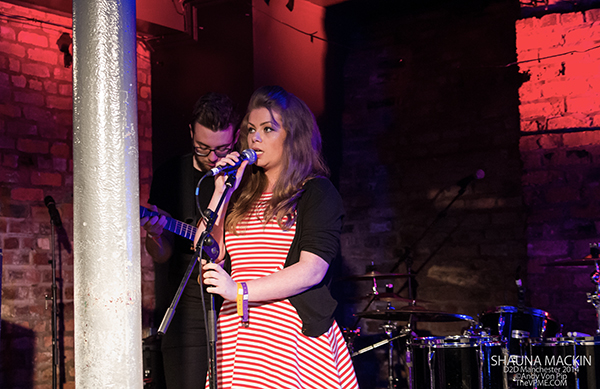 Emily and The Woods, 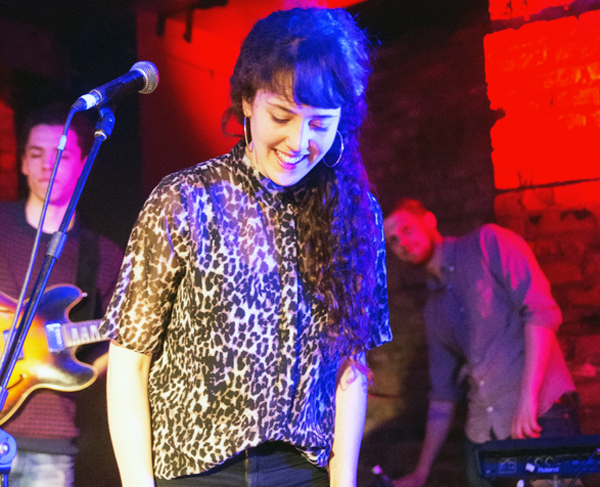 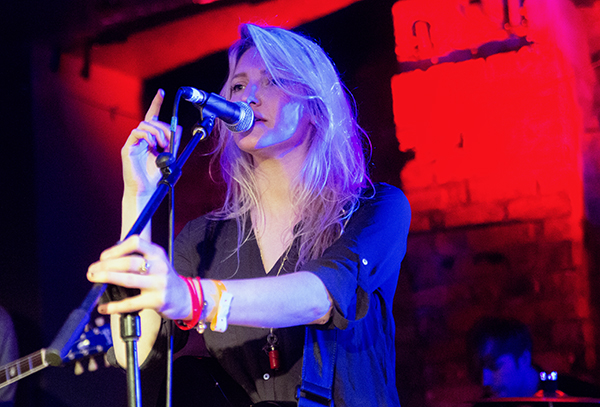 and We Were Evergreen and would certainly recommend you check them out. 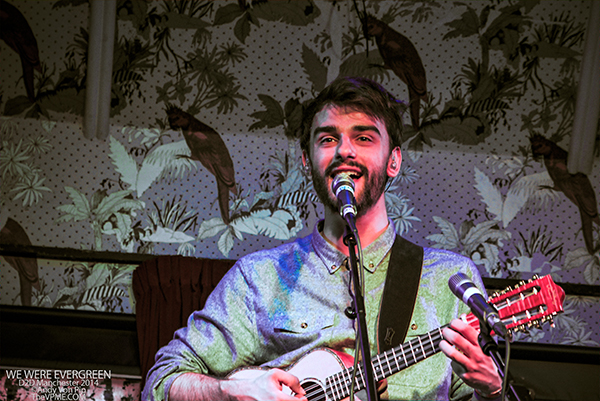 And there you have it our highlights at this year’s Dot To Dot Festival in Manchester, and possibly our most memorable yet. Maybe next year the weather will be kinder?……. Who are we kidding this was Manchester after all ;)