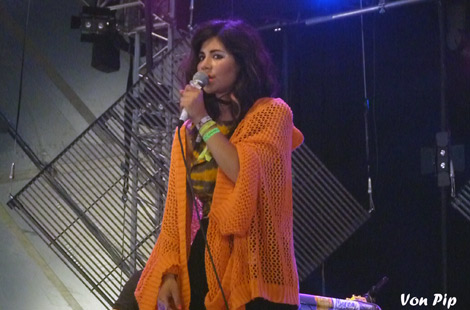 At this stage of the festival the sun’s really starting to get to me, its merciless unwavering glare frying my brain and toasting my skin and I learn a valuable lesson, do NOT keep your sunglasses on all day, because come evening when you take them off you will have two white orbs around each eye and you will resemble Papa Lazarou .  Bizarrely I am even losing the will to drink alcohol, but thankfully seem to have shaken Florence off my trail and have not heard ‘You Got The Love’ for at least three consecutive hours. A spirited early morning set by Two Door Cinema Club revives me somewhat. Alas this is followed by a fairly dire showing from The Lightning Seeds at the Pyramid stage in which Ian Broudie’s  somewhat feather light  sugary vocals seem to have given way to a hoarse painful rasp, still it’s quite interesting if you’ve ever contemplated what Lee Marvin covering ‘Pure’ may sound like!   The next performance of note arrives later in the afternoon in the shape of Imogen Heap who really does redefine the word ‘kooky’.  In between songs she scampers  about the stage  pressing all manner of buttons and knobs like some mad musical Doc Brown from Back to The Future muttering  ‘ooooh this is exciting, very exciting’ and ‘What next, ah yes, oh, what? Where am I? Who are you? . . Aha! Glastonbury! ’  She seems to be channelling the spirit of Bjork,  Kate Bush and Joyce Grenfell  but her set is hugely entertaining and features a duet with beatboxer Shlomo.  Definitely another highlight!

I’d been looking forward to catching Marina And The Diamonds set at the John Peel Tent all day, but now feel so apathetic I can barely walk. When I see the size of the crowd I decide the only way in is to see what magic my press pass can weave. This gives me access to the photo pit and it’s quite an experience to be standing about 3ft away from the stage in front of  thousands of fans, my small camera looking rather inadequate amongst the huge  lenses of the press boys.  In this environment it appears, size IS everything!    Our Greco Welsh heroine produces a suitably buoyant performance, wisely starting with ‘Mowgli’s Road’ to gee up an audience whose energy levels are somewhat dilapidated after a long day in the sun.

For some reason I finish the evening with a visit to the West Holts stage to see George Clinton/Parliament/Funkadelic. . . this sadly is a huge let down and despite Clinton’s legendary status it comes across as a rather self indulgent affair to the point whereby I half expect  Louis Balfour (John Thompson) to arrive between songs  and say “Niiiiice”. The longest introductory guitar solo in history doesn’t really get things off to a flyer, it’s difficult to judge exactly how long it lasts but  let’s just say that when it starts I am  clean shaven and as it concludes I am as hirsute as the count of  Monte Christo .

What better way to be woken up on a Sunday morning than the with aural equivalent of a punch in the face from The Joy Formidable. I’ve seen them now on a number of occasions but this may be their best yet. Ritzy looks genuinely touched and honoured to be playing the Other Stage and the band gave it their all, smashing through a short but hangover levelling set that is nothing short of awesome. The trio seem to be on a mission to batter the life out of their instruments and wake up the whole of Glastonbury!

Over on the Pyramid stage Paloma Faith is about to treat the audience to her own brand of quirky jazz infused soul pop and when she arrives on stage you wonder, aside from Lady Ga-Ga when was the last time  Glastonbury has seen such utterly bonkers stage garb? Clad in a flesh coloured body suite replete with a harness attached to two huge hot-air balloons she looks in danger of  being lifted clean off the stage and floating off into the  cloudless azure. She gives a masterful performance which wows the crowd and features the band artfully weaving the riff from ‘Superstition’ into a huge funk/rock version of “Do You Want the Truth or Something Beautiful’ . For good measure she also throws in a wonderful cover of the Korgis’ Everybody’s Gotta Learn Sometime’.

Over at the Left-field tent Billy Bragg introduces one of my all time heroes Tony Benn who gives an inspirational talk on how we can defeat greed and create a better society and you can’t help but think -where else in the world could I get woken up by the Joy Formidable, entertained by Paloma Faith and inspired by Tony Benn all in the space of a few short hours.

The debate over whether to watch the England Vs Germany game quickly becomes a moot point when news filters though that Germany are pulling our boys collective shorts down and spanking their under achieving bottoms. What better way to raise the spirits then to see a man whose music is as quintessentially English as a Sunday roast and who is  considered by many to be the original Mod-Father, I talk of course of The Kinks head honcho Ray Davies . He dedicates today’s performance to bassist Pete Quiafe who died recently and of whom he says “”I wouldn’t be here today if it wasn’t for him.” Davies’ poignant set is given an almost celestial quality at times with the backing of The Crouch End Festival Choir, featuring on tracks such as ‘You Really Got Me’, ‘Shangri-La’ and ‘Victoria’ as all football woes are quickly banished.

MGMT sadly are a massive let down and their sound has all the potency and appeal of watered down Netto lager strained through a vagrants sweaty y-fronts and served in a monkeys scrotum . . . self depreciation may well be an admirable quality but it’s too late to save the show and when the band introduce “Time To Pretend” as ‘here’s a song from when we used to be a popular band” it doesn’t seem pithy or ironic in the slightest, just painfully true.

And so on to the final headliner Stevie Wonder, sadly at this point I’m delirious; gabbling incoherently and looking like Shane MacGowan at his dissolute worst . . . nobody notices the difference.  I see the size of the crowd assembled at the Pyramid Stage and watch about fifteen minutes of Mr Wonders show before the pushing and shoving gets too much and I decide to see Orbital instead.  In retrospect this is a good move as their sound is massive and the vibe is what one might call ‘loved up’ . An added bonus is the appearance of current Time-lord Matt Smith who joins the band on stage for a rousing version of the Doctor Who theme and provides another one of those ‘Glastonbury moments’

Then it’s off the the Brothers cider bar for a few more pints,  final goodbyes and one last bit of  heroic, cirrhosis defying partying before finally exhaustion kicks in and I succumb, retiring to my tent . . . broken …

So what did I make of the experience?  Well it’s one of the best places on god’s green earth I’ve ever ventured to. I’ve mainly covered the music but that’s actually just a fraction of what goes on here and yes, there is something spiritual and rather affecting about it the whole place.  Whether you’re up at the stone circle where you can survey the whole site as you observe literally hundreds of sky lanterns soaring into the Somerset sky at sunset , or you’re watching bands you’ve seen grow from small beginnings and are now here, playing in front of massive crowds, it’s all profoundly touching . . And yet words fail to aptly capture its spirit or vibe. It’s a cliché but the spirit of Glastonbury is something that you don’t just suddenly discover but is something that reveals itself to you during your stay here.  I keep thinking of Rutger Hauer’s masterful speech in ‘Blade Runner’ as I prepare to leave the site,  “I’ve seen things you people wouldn’t believe. Attack ships on fire off the shoulder of Orion. I’ve watched C-beams glitter in the dark near the Tannhauser Gate. All those moments will be lost in time, like tears in the rain.” Or maybe our chum, Laura Barton,  who has been such a good egg and source of  help  prior to, and during the festival,  summed it up best when she said “Explaining Glastonbury to someone who has never been is a bit like talking about your time in the war, or a religious conversion or something…” Amen.

I am now a fully fledged Glasto foot soldier…absolutely f**king loved it.  2011 can’t come soon enough-see you there !!