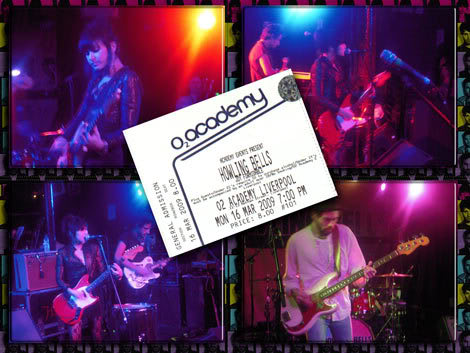 There are some bands I seemed almost preordained never to see, on two previous occasions I have held in my grubby little hands, tickets to see Howling Bells, and on both instances I have been cruelly thwarted by the slings and arrows of outrageous fortune, oh and the missus.  Finally a gig at Liverpool’s 02 Academy would, I hoped, prove to be third time lucky in my quest to finally catch this fabulous band live.

My sense of anticipation began to reach feverish new heights when I received a text from a friend who was in the throes of a condition known as ” post Howling Bells gig euphoria” following their performance in Sheffield .  “Nights like this make me think I could probably survive if the only band in the world was Howling Bells …Mind you The Joy Formidable was pretty …well…formidable…Monday should rock your world” it read.  And do you know what? He was right, it did!

Unbelievably  I had finally made it to a Howling Bells gig and it kicked off in fine style with an awesome display of sonic beauty from The Joy Formidable who produced an incredible live set, full of passion, power and raw energy, that may have had some wondering how it could be possibly topped.  The response was universally positive amongst the audience, which included an eclectic mix of students, Goths, and stately gentleman like my good self,  as many beat a hasty path to the merchandise stall to snap up copies of The Joy Formidable’s marvelous mini album, “A Balloon Called Moaning” .  The fact that I had already downloaded the album as a freebie, didn’t really come into play, as when something sounds this good you just have to own it!

After four years waiting and spending the preceding days avoiding walking under ladders, ensuring I didn’t tread on the  cracks in between paving stones  and surviving Friday the 13th  unscathed, the moment was nigh and Howling Bells took to the stage. Simply put, they gave a quite magnificent, spellbinding, performance which exceeded my already high expectations and will live long in the memory.  Juanita was the perfect front person, prowling the stage, exuding a cool charisma whilst prompting and cajoling  the typically reticent Liverpool audience to participate; at one point she climbed over

the barrier to join the crowd herself.  She proved that she truly is one of the great female performers amongst her peers , and should anybody tell you differently they are obviously an oaf, a buffoon or possibly descended from this fine fellow here… The band effortlessly switched between the synth driven, futuristic soundscapes of their recent epic album “Radio Wars” to the windswept goth-country of their much loved debut with consummate ease and provided a solid  innovative and exciting backdrop for Juanita’s voice to weave its subtle magic. And what a voice! At times recalling the bruised vulnerability of Harriet Wheeler from The Sundays, or the languid nonchalance of Mazzy Star’s Hope Sandoval, whilst at other points fueled by PJ Harvey-esque bursts of passion, it never fails to be anything other than mesmerising. It really is like swimming in a lake of black honey. The evenings highlights included “Treasure Hunt“, “Broken Bones”, “Digital Hearts”, a spanking version of “Low Happening” plus an impromptu guitar solo in the middle of “Into the Chaos”.

Alas all good things come to an end and all too quickly the evening was drawn to a close with a suitably breathtaking version of  “Cities Burning Down”.  It’s nights like these that just reinforce how great live music can be and I have now discovered that post Howling Bells gig euphoria is a feeling that is rarely bettered! I hope I don’t have to wait another four years to see them again!  They are one band I’d certainly  now travel any distance to catch live!