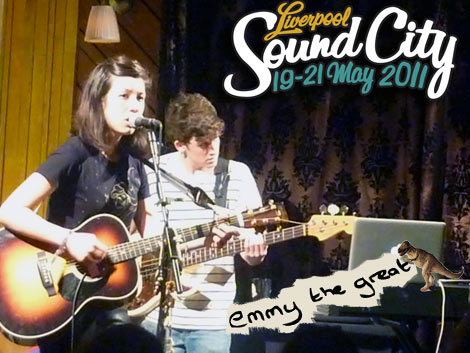 And so on to part two of our Liverpool Sound City round-up.

(PART 1 featuring The Good Natured, Pete And The Pirates and Let’s Buy Happiness can be found HERE

‘A Woman, A Woman, A Century of Sleep ‘ By Emmy The Great.

With such a varied and eclectic mix of musicians performing over three days and festival wrist bands enabling fans and industry types to dip in and out of gigs at numerous venues, it’s perhaps inevitable that at some stage you will come across most music fans number one bugbear. I talk of course of the cretinous, boorish, bassoon voiced simpletons who think it’s perfectly fine to talk through an artist’s set at a volume that makes Brian Blessed’s  thunderous, booming baritone come across as a breathy, camp, high pitched whisper. Nobody expects unwavering reverential silence but there’s a fine line between a lively, vibrant atmosphere and downright rudeness.

At Emmy The Great’s performance in Parr there were times when the latter defiantly applied. It’s discourteous not only to the artist but also to fans who are there for the music. So irritated were we with this sort of behaviour, we have started our own  “Talk When Artist’s Terminate Songs’ campaign or  ‘T.W.A.T.S’  if you prefer. It  basically sets out to inform droning bores on gig going etiquette and it can be downloaded HERE. We welcome any further suggestions, as this is by no means a definitive list. (Email us here.)

The constant chatter in some quarters did somewhat taint our enjoyment of Emmy’s set, which was a shame because she’s  a lovely person and extremely talented and this was our first chance to hear songs from her soon to be released second album ‘Virtue.’  On the positive side, what we did hear suggested that this album could match or even surpass her  debut and former VPME album of the year ‘First Love.’ We chatted with Emmy after the gig and she seemed unruffled by the lack of manners displayed by the few.  We also met Sean Adams from Drowned In Sound and he too shared our annoyance at this seemingly growing trend of inane, invasive, chatter at gigs. (Emmy The Great Interview HERE)

Later we joined Sean for the D.I.S. curated gig at the excellent Kazimier venue, primarily to see Kurt Vile And The Violators. Despite a few technical difficulties Kurt’s set was a much louder affair than we’d anticipated based on the studio version of his latest album ‘Smoke Ring For My Halo’.

Live Kurt’s sound  was a revelation. His  laconic drawl, residing somewhere between a young Bob Dylan and a ‘medicated’ Evan Dando was still in evidence but the  rootsy guitar plucking was replaced by a much louder sonic experience, veering  towards Loop and even a stoner style My Bloody Valentine wall of sound, which was as impressive as it was unexpected. The venue itself was an excellent setting for Kurt’s introspective, off the wall songs in front of an appreciative audience.

“Easy To Love” By The Jezabels.

The Australian music industry’s early afternoon barbecue at Heebie Jeebies was buzzing, the lure of  free food to soak up the previous night’s hangovers certainly provided a draw, as of course did the promise of some top quality music. Top of our  ‘to see’  list  was The Jezebals, we’d recently described them as a band on the cusp of greatness in a  panel piece for Music Week  regarding their fabulous UK debut single  ‘Hurt Me’  (READ HERE)  and as a live proposition they really did blow peoples socks off.  The focal point is Hayley Mary’s amazing voice that swoops and soars and is as on occassion as  dark and  dramatic as  Kate Bush as strident as Siouxsie , but is never histrionic, self indulgent or warble-mungeous in the style of  Florence. But if Hayley’s vocals are what draws you in, you soon discover what fantastic musicians the  band are with thunderous drumming, great keyboard riffs and Sam Lockwoods massive guitar licks, this is undoubtedly a band going places. Hayley herself described her band mates as the best musicians she’s ever heard and  the audience, many who may have been here purely for the food, were soon transfixed by the band . We also caught up with them later at Parr Street Studio’s and the response was equally enthusiastic.

So that was Sound City 2011, the best one yet for us, and not a Beatles tribute band in sight (unless you count Cast ;) ho,ho!  ). As we made our way home to brave ‘The Walking Dead’ on the night bus, we met a Liverpudlian in exile who had travelled back to the city for the first time in years.  He worked in the music industry and  explained he had become disillusioned with the insular attitude, the dreary self indulgent Scouse muso retro wankery, which he felt had strangled and stagnated the music scene  here for years. He had also tired of the City’s music promoters figuratively cutting each other’s throats instead of working together. Sound City had opened his eyes  enabling him to see how things have moved on and what great venues are now dotted around the city. Slightly worse for wear but with genuine emotion he told us  “the last three days, have made me fall in love with music and my home city all over again. That’s what I’ll take from Sound City.” And really,  that’s what it’s all about, we rather felt the same, indeed the first thing we did upon arriving home on the final night was to update our facebook status with four words “People Are F***ing Great’.  And maybe those two simple anecdotes neatly encapsulate the entire spirit of  Sound City 2011?

See you next year.

Thanks To Matt Thomas for the photos, where credited  and be sure to check out his website here for some amazing musical photography.