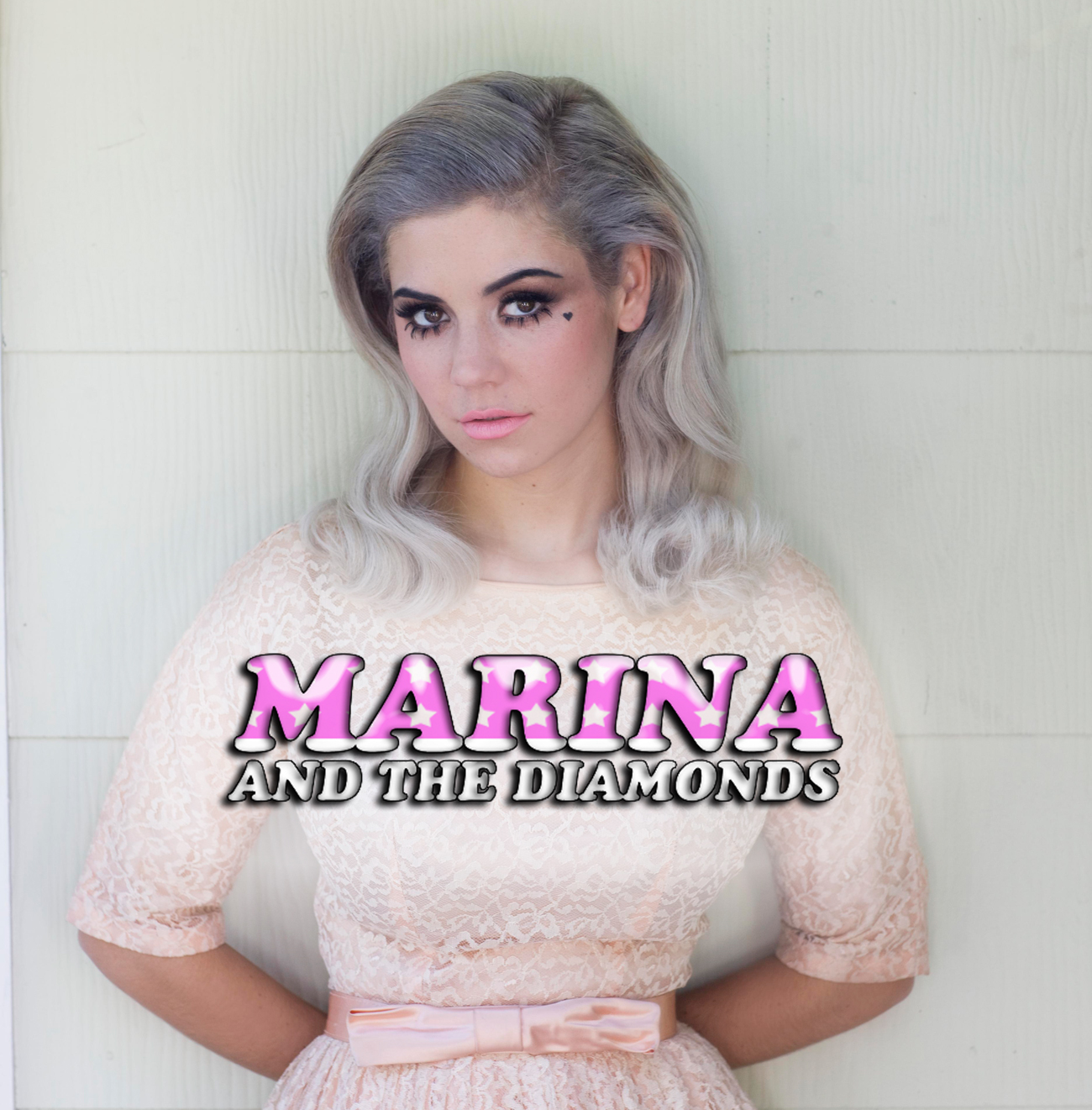 Marina and The Diamonds returns with a new  album “Electra Heart” and proves that whilst there’s plenty of style, there’s even more substance to be found within Ms Diamandis’ second full length musical offering.  Doubtless there will still be those who will be irked by her seemingly endless array of influences and pop personas and dismiss her as a pretentious “prima donna,” whilst others, raised on the Cowell approved pop template of adhering to Mariah/ Christina style bellowing may find Marina’s  theatrical semi operatic pop a little too off the wall for their bland conservative tastes. And there are of course “The Diamonds,” [her loyal and excitable fans] who one would imagine, may explode with joy when they hear just what she has in store for them.

After she described her début album “The Family Jewels” as a “failure” (?), there would appear to be a lot riding on “Electra Heart.” It’s an album which she’s gone on record as saying was inspired by “Valley Of The Dolls”,  touching again on the vacuous nature of the American dream whilst seeking to explore patterns of behaviour via female archetypes. She’s also described it as an “ode to dysfunctional love” (is there any other kind?  ;) )  OK, we admit, after reading the previous two sentences in one sitting you could be forgiven for thinking “well it does sound a tad pretentious?” but let’s face it conceptually,  Ziggy Stardust for example, was as pretentious as it gets, it was also fucking brilliant.  There’s always a degree of artifice prevalent in most genres, and what Marina strives to do is approach pop from a completely different angle to many of her formulaic pop peers, so if that’s pretentious then bring it on. Credit should also be given for not blatantly trading on her obvious good looks in an age when Beyoncé’ and Rihanna seem willing to shake their bootilicious booties for the sake of a free pack of gum and a Greggs pastie. And just maybe in the process Marina is making music that isn’t quite as disposable and throwaway as your average pop chart fodder (the mooted acoustic version of the album would  adroitly prove this point .)

And so to the heart of the matter, is the music any good?  We confess we weren’t particularly enamoured by her first outing since “The Family Jewels” in the form of  the “Radioactive” single (which is only available on the deluxe edition of “EH”) it wasn’t a bad song per se, had an aesthetically pleasing  video, but was slightly generic and, well, rather dull .  The first song we heard from “Electra Heart” was ” Homewrecker” and again admittedly it wasn’t quite love at first listen.  However we needn’t have worried , “Electra Heart” is a sumptuous pop album and vastly superior to the dreadful lifeless mass produced pap that is the staple diet of “4 Music” (has there been a more depressing, anodyne music channel?) Stylistically and lyrically its a Neil Armstrong style step forward from “The Family Jewels,”  right from the off, the playful stomping camp poptrash of opener “Bubblegum Bitch” the album rarely puts a foot wrong.  Her decision  ( which was initially taken with some trepidation by all accounts) to team up with  a hot shot production team (Rick Nowels –Madonna, Stevie Nicks, Lykke Li,  Dr. Luke –Katy Perry, Liam Howe – Sneaker Pimps and Greg Kurstin – Kylie)  has paid dividends and has given the album a slick, premier league shimmer. Essentially it hasn’t stripped her of her idiosyncrasies, watered down her vision or turned her into a bland pop puppet in the process. True, the vocal ticks and barking mad “cuckoo” hollering is toned down as this is a more reflective, melancholy, still snarky, but less in your face Marina but her personality is stamped all over the album. I guess some listeners relationship with the album will be defined by whether they find that particular personality engaging or infuriating, but hey, ho that’s life, you can’t expect absolutely everybody to like or “get you.”  “Lies” is sublime, “State Of Dreaming” and “Power And Control” show a new found maturity in terms of her song writing, and have “hits” written all over them, whilst live favourite “Living Dead”  sounds more like edgy alternative, electro new wave than it  does balls out pop. “Teen Idle” takes over were songs such as the achingly beautiful  “Rootless” and “Numb” from her début left off, and if all pop sounded as good as “Hypocrite” Simon Cowell would wave a little white flag and live out his remaining days tanning his big fat floppy man-tits on a tropical island far, far away from popular music.

A broadsheet newspaper once made the assertion that Girls Aloud were the pop group it was “OK”  for the intelligentsia to like, which when you think about it is inverse middle class snobbery of the highest order, (notwithstanding the fact they were completely ear shreddingly shite.)  But, y’know it is ok to like Marina, not through knowing pseudo-intellectual hipsterism to be worn like a badge of honour to denote how admirably perspicacious, erudite, eclectic, liberal and open minded you are, but down to the simple fact that it is fucking darn good pop music.

You suspect, even if this album is the massive success it deserves to be, she still won’t be completely happy. This is a good thing, because as we know comfort kills creativity, and “the restless spirit never loses its wings, if sometimes it cannot fly, it is because during those moments the sky vanishes.”  Ok so who’s pretentious now ?  :P

30 thoughts on “Marina And The Diamonds – “Electra Heart” – Review.”