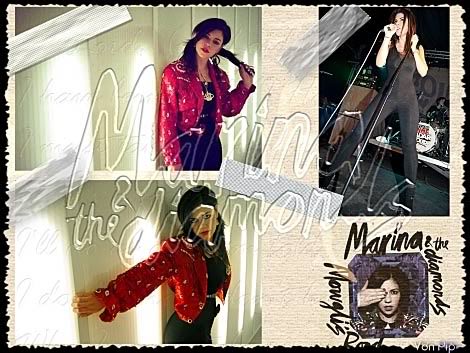 We’ve got obsessions / All you ever think about are sick ideas involving me, involving you’ sang Marina and the Diamonds, and ironically in doing so, kick started my own mini obsession with her music! Not, you understand, in the scary ‘I’m going to kidnap you and keep you in my room until you write me a song,’ Kathy Bates/James Caan type sense. No, no, more of a ‘by god, this is everything pop music should be’ kind of reaction, an aesthetic appreciation, if you will, for the fabulous music Marina has been producing and an admiration for her refreshing honesty about, well, …everything really. So if like me, you’re becoming rather jaded by the dreary over-hyped production line procession of insipid, anodyne pop princesses, then I’d advise you to look no further than the rather wonderful Marina and The Diamonds. Unlike Blondie, Marina isn’t actually a band as such but a solo artist, she explains the choice of name thus “I like fantasy and I hate loneliness so the idea of Marina & the Diamonds instantly felt cute and warming and not as egocentric as Marina Diamond.” Her brilliant debut ‘Obsessions’ was issued as a limited release by those hip and happening dudes over at Neon Gold and was lauded with justified praise from every quarter. The follow up the equally stunning ‘Crown Jewels EP’ cemented Marina’s reputation as one of the brightest talent’s resident within these here shores.

Now at last her first official single hits the shelves on 16th November which will hopefully establish her as the nations sweetheart and see statues erected in her honour the length and breath of the country. (Ok I’ll admit that’s my best case scenario, but you get my drift) The song is actually a re-recording of ‘Mowgli’s Road’ which first appeared alongside ‘Obsessions’ earlier in the year and is a track which quickly established itself as a firm fan favourite and crowd pleaser at this year’s summer festivals. Of course there’s always a concern when a much loved song gets a make-over, but thankfully ‘Mowgli’s Road’ retains the driving, relentless energy and purity of the original with the addition of some rather nice keyboard flourishes which aren’t over done and serve to further polish this already glittering musical diamond. ‘Mowgli’s Road,’ all pounding beats and “cuckoo” shrieks, is the perfect introduction to Marina’s kaleidoscopic pop world which has been described as part Kate Bush and part Lene Lovich. It positively throbs with energy and life and is unlike anything else being produced in the pop sphere at the moment. It’s catchy enough for the chart kids to get hooked but it also has a wild, dangerous, and let’s face it, slightly demented edge that will appeal to the indie crowd too.

Off stage Marina shoots from the lip and takes no prisoners, for example when she was lazily compared to Kate Nash she retorted “I’m sooo like Kate Nash because OOPS! I have a vagina and a keyboard.” Marina’s songs should be judged on their own merits, they are distinctive, unique, intelligent, literate, powerful and at times rather moving. To dismiss Marina as merely “kooky” or “quirky” would be doing her a huge disservice as she produces music that is as diverse as it is wonderful and unique. She certainly is a ‘one off’ as regular readers of her blogs and twitter updates will doubtless testify, whether she is tweeting from a train warning that if the drunken bloke opposite her kicks her leg one more time she will rip his f**king head off, to ruminating on the pros and cons of life in Sweden “Everyone is beautiful and tanned, so self-esteem may suffer / could end up contributing to high suicide rate in Scandinavia” she comes across as far more real than the likes of Lily Allen ever could.

‘Mowgli’s Road’ deserves to set Marina on the road to stardom, she’s just the sort of talented, vivacious character the pop arena is crying out for at the moment. Full of life, bursting with ideas and striving to make music of value on her own terms. She manages to appear esoteric, yet honest and open, fiesty, yet vulnerable. And it is these kind of contradictions that make her such a compelling individual…. I make no apologies for the unrelenting enthusiastic tone of this review (you should have seen the first draft) but I haven’t been this excited about a new artist for quite some time.

Acquaint yourself with Marina and make her a star! This Diamond is a rare and precious gem.

Originally written for Altsounds.com here a review which caused a little bit of controversy too , which was nice !

0 thoughts on “Marina And The Diamonds-Mowgli’s Road”