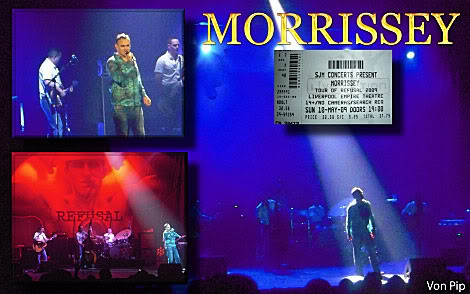 “All You Need Is Me ” By Morrissey

Morrissey has had many roles thrust upon him by the music press, by accident or indeed design,  the poet, the plagiarist, the lonely misunderstood genius,  the patriot, the racist,(sic)  even the soapstar ,  and now in the autumn of his musical career could it be that he is  entering what some would describe as  the “Vegas years ? ” I approached Morrissey’s Liverpool  gig with some trepidation, could he still “say something to me about my life”? There was also the matter of the venue, I mean Liverpool Empire looks about as comfortable at being a rock n roll venue as a Geography teacher “cutting some rug” at the sixth form discothèque! It’s far more Celine than Dion  and invariably generates all the atmosphere of  Moonbase Alpha.  Then of course there’s the great man himself , would time spent hanging out with celeb chums such as Jonathan Ross and Russell Brand have dulled his edge, can somebody enjoying the celebrity high life really have much reason to be so miserable and angst ridden?  Indeed is it not a little unedifying for a man  who will be 50 in a matter of days to still be so deeply troubled by such teenage insecurity and self doubt ? Surely he should  do  the sensible dignified  thing at his age,  buy a big flash car, wear a white suit and attempt some jiggery pokery with somebody 20 years younger ? Another thought that fleetingly danced across my consciousness was  maybe Mozza needed to venture beyond the perimeter of his walled châteaux and reconnect with real “kitchen sink” people once more?

It’s  difficult to ascertain if any, other than the crapness of the venue,  of these  vague concerns  were justified on tonight’s showing and to many in the audience   ( which  included a “British Sea Power” T-shirted Marc Riley, ex Everton hard man Barry Horne  and Liverpool midfield maestro Xabi Alonso ) it  mattered not  one jot as Morrissey certainly engenders a fierce loyalty in his fans which can  on occasion,  veer towards the “fruitcake” side of fandom .  In reality  it was a  solid set  rather than an inspirational one, never quite scaling  the dizzy heights, but circumstances  such as  illness  the fact that it was a Sunday and did I mention the venue was crap ,  really did play a part. “Such a wonderful building, but absolutely no atmosphere,” bemoaned Mozza ,  “How does the mayor cope?” Combining songs from  his new album “Years Of  Refusal” with Smiths classics such as “This Charming Man” “Ask” and “How Soon Is Now” Morrissey gave a  fairly flawless vocal performance, impressive, given that in between songs he made constant references to “antibiotics” and at the time of writing it transpires his Royal Albert Hall show has been cancelled ( 11/05/09) as doctors have advised him to rest.  That would certainly explain why he did seem a little out of sorts and gave a performance that was perfunctory more than passion fuelled.  But one could also argue that  the mix of material performed tonight did not,  happy bedfellows make . True, there are many who would argue deep into the night  with regard to what would make the prefect Morrissey set list,  but there’ s also a danger of songs falling flat on their arse when juxtaposing classics such as “Girlfriend In A Coma” next to the more oridnary tracks from some a Mozza’s recent solo efforts.

Morrissey is possibly ultimate pop stylist of his generation and at his best still produces flashes of  sardonic wit , tongue in cheek humour and still retains  an innate  flair for the melodramatic, but alas this show had a strangely flat ambiance and one felt he may have preferred to have been  tucked up in bed with a nice cup of  Horlicks, a few  paracetemol and  a Rita Tushingham DVD.  He does still have ability  to connect with the “misunderstood” , and judging by his audience  maybe there’s not that much difference between teen angst and mid life crisis these days, after all,  there’s little doubt the generation gap has  receded immeasurably  in the last 20 years.   As I left the venue  I noticed one Morrissey die hard had the word (and song title)  “Disappointed” tattooed across the back of his neck ….and maybe that kind of summed up the evening….. To quote the great man “All You Need Is Me” , well quite, but a decent venue  would also help too.

Verdict:  He’s still got it …it was good …..without ever really taking off