Ok I will accept that the title of this post might be construed as a tad misleading and has perhaps strayed over into the more deluded realms of ‘optimistic,’ “on tour ,with Dum Dum Girls? ” Well one can dream. For clarity what I actually mean is I caught them twice in as many days on the UK leg of their European tour, first at FAC251 in Manchester, then just over the Welsh border at Central Station in Wrexham. Two places whose musical heritage couldn’t be more antithetical, Manchester of course has a fabulous musical legacy, giving the world The Smiths, Joy Division, The Stone Roses, The Fall, The Buzzcocks and New Order amongst others whilst Wrexham has gifted us erm, K-Klass….

Having caught Dum Dum Girls on a number of occasions over the past couple of years both performances demonstrated just how far they’ve evolved from what was essentially Dee Dee’s lofi bedroom project, into a fully fledged kiss-ass band of some distinction. Sonically they have improved beyond measure expanding their musical palette whilst still remaining faithful to their garagey roots, mixing 60’s girl group harmonies with the Ramones trademark head down full on speedball punk/pop fizz. It goes without saying the band look stunning, hell, this is what a band SHOULD look like, all heartbreak n’ leathers and Dee Dee wearing her trademark “iconic look-in the making” stripped tights. They rattle through songs from this year’s “He Gets Me High EP”, which in many ways acted as the bridge between their lo-fi debut album “I Will Be” to their second album “Only In Dreams.” As with most groups the live sound is rawer and more jagged, lacking some of the studio polish and this fits in perfectly with the bands image and reputation, with guitarist Jules fusing a potent mixture of Johnny Marr ‘s chiming jangle, allied to twisted Mary Chain style guitar pedal distortion. Dee Dee’s vocals are pretty much bang on and she seems much more assured than on previous occasions, possibly the raw emotionally honesty of the songs allowing her to really let go, freeing her from the shyness which many have on occasion been misinterpreted as cool indifference. True, that during both gigs there is very little in the way of banter, but hey, if you want wise cracks go see a comedian; Dee Dee gives enough of herself musically, expressed through beautiful poignant poetic lyrics allied to the sort perfect pop songs that exist “Only In Dreams” for many songwriters. The sort of songs written from the heart and infused with a genuine emotion that you simply can’t fake. If that isn’t enough for you, why not fuck off to a corporate arena communal wank-a- long and listen to songs born at a record label focus group, for this is very much the real deal.

Veronica Falls provided support and played two sparkling sets which encompassed the majority of their superb debut album plus a couple of new tunes. Frenetically strummed guitars and melancholy appear to be Veronica Falls trade mark and they fuse classic pop, a touch of 60’s doo-wop with late 80’s guitar jangle to concoct an intoxicating musical cocktail. I really hope this band become more widely known because the more I play this album the more I love it. Great band and great performances.

A quick mention most be given to Retriever who were the first band on the bill at Manchester and Novelle in Wrexham. Newcastle’s Retriever were an astonishing full on sonic ear shredding assault with driving beats, searing guitars, thundering bass all drawn together by lead singer Jackie Miller’s strident, powerful vocals. Novelle took the opening slot in Wrexham and performed a set shot through with frail melodies swimming under a wash of woozy shoegazy feedback . All in all a pretty perfect damn near perfect gig experience. 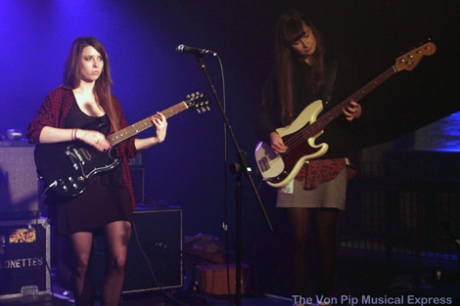