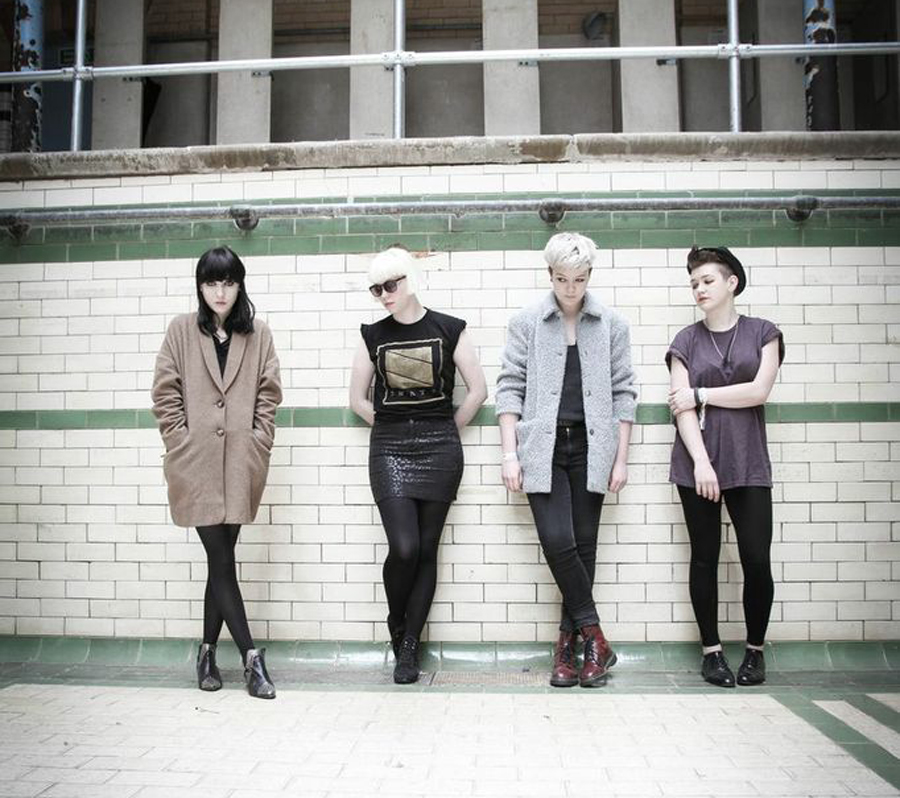 When rumours of a new, edgy all girl garage group from Manchester called PINS first started to circulate, our interest was piqued.  Blurred shadowy, stylised images started to emerge online, and buzz-bloggers/tastemakers started to wax lyrical about the band before a note had been played in anger. This of course could have put us completely off the group because the problem with modern day music critique and buzz blogging is there is often a PR led, lemming like mentality, wherein the desire to be seen as “on Zeitgeist” overrides objective discourse.

This of course does not always serve new music well.  Hype without substance can be counter-productive, but things are even worse in the printed media where commercial concerns countermand any reasoned appraisal. This rather sorry state of affairs can only explain the baffling popularity of David Cameron’s new favourite band, the omnipresent Haim. Here we have a band riding high on a wave of weapons grade propaganda, assisted by the glib deference of the hype happy British music press and backed by the might of Jay-Z’s monolithic Roc Nation management group. They are clearly a band who much like the banks, have too much invested in them to countenance commercial failure. Yet as the media complicity falls into line we have to ask the question – are they really that fucking good? Seriously, a group who conjure up visions of a Buena Vista Amish barn dance collective at an 80’s karaoke night sponsored by GAP are the future of music ? Is print that desperate for ad revenue that they are willing to sacrifice all objective critique in favour of ££££… or do they actually, genuinely LIKE this shit?

Fortunately, PINS by happy accident or artful design presented themselves to the world in such a way as to garner a degree of favourable attention, but then stepped back from it.  Not a band to take things for granted they then substantiated the occasionally dizzying claims of tastemakers with a slew of excellent singles and incendiary live performances. And for a relatively new band, they’ve since given every indication that they have exactly what it takes to transcend the fickle world of hype and buzz, and they’ll probably do it without the help of “Hova” himself , Jay -Z.

The proof of the pudding is in the eating and PINS début album ‘Girls Like Us’ released by Bella Union is without doubt a hugely impressive first outing on any number of artistic levels. It also manages to succeed where so many others have failed in that it captures the power, intensity, and excitement of the bands live performances.  The album was recorded live in just one week at Liverpool’s Parr Street studios and as well as being rammed with quality tunes it’s also crackling with the exhilarating atmosphere of raw creative spontaneity that bands often try to airbrush out of their sound.

‘Girls Like Us’ is an intriguing mix, lyrically it focuses on themes such as ( to quote the Manics) “culture, alienation, boredom and despair” as well as lust, regret, madness, loyalty and vulnerability.  But it’s also imbued with a singular sense of purpose, this is very much the girls vision, not the record labels or the suits.. and there’s a feisty “you’re either with us or against us” type mindset that prevails throughout.  Juxtapose this against a musical landscape that is being asphyxiated by a tsunami of polite inoffensive overproduced retrograde horse-shit and ‘Girls Like Us‘ is a breath of fresh air. Musically PINS may get pigeon-holed with other edgy female fronted groups, but this album draws a creative line in the sand and sets them apart. They combine the adrenaline head-rush of monochrome post punk garage noir on the likes of ‘Get With Me’ and ‘Waiting For The End’ with a more subtle, nuanced sound. There’s the imperious seductive Siouxsie-eque vocal on ‘I Want It All,’ the poetic woozy spoken word beauty of ‘Velvet Morning’ through to the visceral gothic tribal paean to obsessive love/lust that is ‘Mad For You.’

Ultimately  ‘Girls Like Us’ proves that PINS are no one trick ponies, they may not have reinvented the wheel but they’ve certainly given it their own special spin. In doing so they have fashioned an album, which although not technically perfect, and which occasionally drops the odd clunky lyric, has enough dark glitter about it to become something of a cult classic…. And perhaps the best part is… this is just the start !

Now get them on the front of the NME FFS. Or do we need to write a cheque? Paging Mr Zed…..

6 thoughts on “PINS – Girls Like Us – Cutting through the Hype”