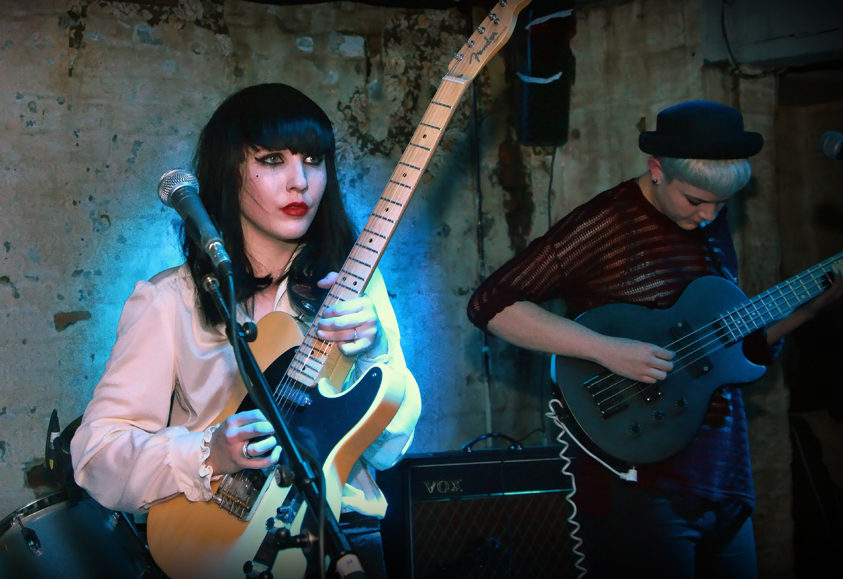 PINS appearance in Liverpool last week heralded the start of their first headline tour in support of their superb new ‘LuvU4Lyf ‘ EP.  The venue itself, the quirkily named, nautically themed ‘Shipping Forecast’ is pretty much the antithesis of the soulless corporate arena experience, a sweaty low ceilinged urban basement which one day may become the stuff of legend.

Wet Mouth a band we really do love, opened proceedings and they didn’t disappoint, hammering out edgy, new wave grunge summoning up the spirit of Sonic Youth, The Pixies, and Belly fused with the visceral sexuality of PJ Harvey.  Front woman Veslemøy Rustad Holseter exuded an unaffected edginess and managed to rock the grunged up Pippi Longstocking meets Donita Sparks-look with some style.  Whilst Ves drew the eye, guitarist Sophie Ellison was a more sedate presence and appeared to spend the duration of the set in an almost Zen like state of tranquillity.  In contrast, Veslemøy and Bjorn on guitar jerked and swaggered about the stage, backed by some thunderous drumming from Dan, a man who attacked his kit with an almost murderous rhythmic vigour.  Clocking up well over 11,000 plays for ‘White Light,’ their as yet only fully mastered track available on the net, Wet Mouth are clearly a special band with huge potential and with a bit of luck a bright future! 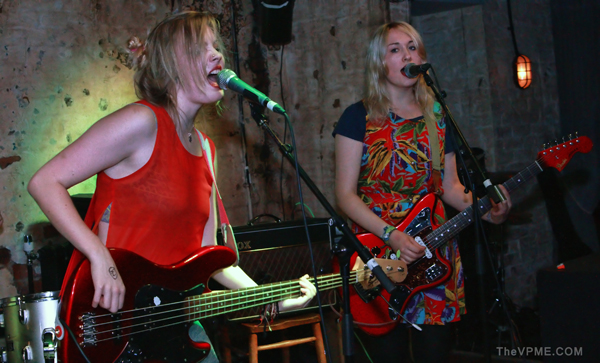 Bird arrive on-stage looking like they’d stepped from the pages of some magical, mysterious Gothic fairytale and pretty much had the audience entranced from the get go.  Adele Emmas the bands  founding member  decided to strip back their line up from a five piece to just three.  A bold move given the expansive atmospheric nature of their songs but one that has certainly paid dividends, allowing Birds to spread their creative wings and soar to new previously unscalable heights.  The addition of guitarist Sian Williams appears to have been a catalyst for Bird to explore exciting new territory, there is a sharper edge to their sound, a new-found confidence,  sounding at times like a more coherent gauzy, Bronte-esque version of Warpaint.  Their newest song ‘Ophelia’ hinted that the best is yet to come from this highly talented trio, and our only complaint would be there was no ‘Hey Hey Moonshine’ included in a set, which ended with a supremely well executed, spine tingling version of the Bauhaus classic ‘ Bela Lugosi’s Dead.’ 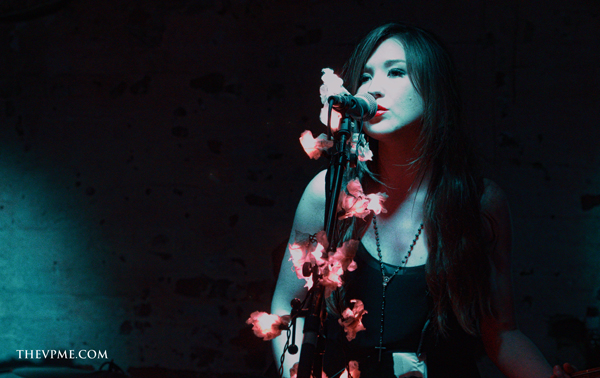 And so to PINS, who were quite simply amazing, a swaggering, coruscating visceral sonic seduction!  The progress this band have made in even a few short months is incredible and they unleashed a spiralling vortex of raw sexuality, self loathing- love you- hate you- fuck you kind of vibe that was utterly spellbinding.  It’s hard to believe they’ve only been together just over a year and they served notice that they are rapidly establishing themselves as a musical force to be reckoned with. 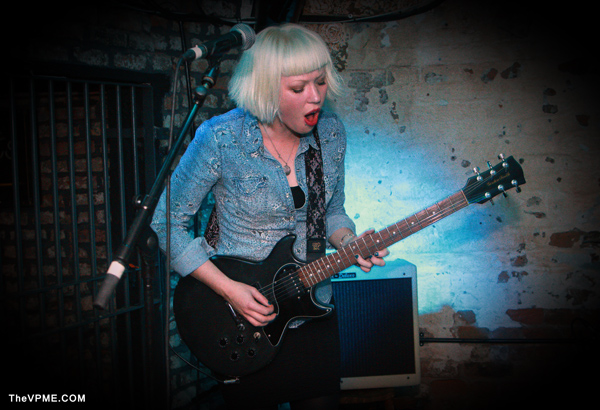 In such a small venue, you really got a sense of what this band is all about.  For example, you are struck by just what an amazing guitarist Lois Mac Donald actually is and you can’t help but wonder if at some point she’s been involved in a shadowy clandestine midnight assignation at a certain crossroads in order to enter into a Robert Johnson style Faustian pact!  On one hand, she can coax out notes as clear as the ghostly peel of church bells across a deserted graveyard and then join forces with singer Faith Holgate to launch a sonic assault of blisteringly beautiful noise pop.  The bands set was a well judged mix of buoyant fast-paced numbers fused with slower sinister slightly foreboding tunes, the result was a quite mesmerizing combination of the beautiful and the brutal.  Vocalist Faith Holgate has genuine star quality with a charismatic stage presence as she defiantly stared out at the crowd from behind her mic ala Iggy on The Stooges “Raw Power” album sleeve, lost in the moment.  Quite frankly, nights such as this are what live music should be all about, up close, personal visceral and real.  PINS proved not only do they look every inch like a hip CBGBS era New York band, but also they have the tunes and talent by the bucket load to more than match the buzz. 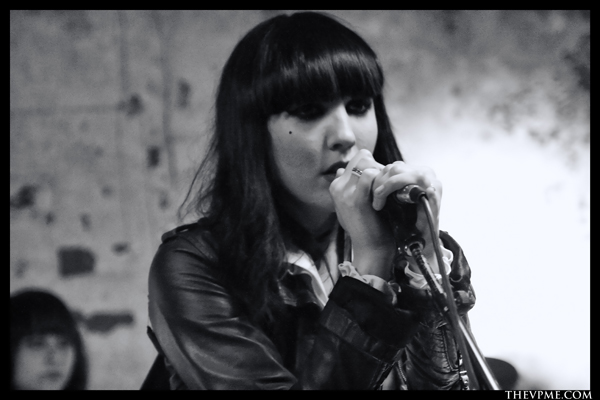 In fact, we were so impressed; we decided to make the dangerous Tolkein-esque trek up the M56 to catch PINS again for their home-town gig in Manchester.  The Soup Kitchen is yet another basement venue and one which boasts a bizarre unisex toilet where the potential for embarrassment is manifold; but as a venue it does have an appealingly sleazy subterranean vibe, and on this occasion, there’s the added bonus of September Girls on the bill.  The five piece from Dublin City added a sparkling mix of 60’s West Coast pop with a dash of classic 4AD style shoe gaze to proceedings and with practically all band members taking turns on vocals, it was amusing to see photographers attempting to get a fix on who actually is the lead vocalist.  September Girls are certainly a band to watch out for, and once the melodies emerged from the blanket of reverb you realise these ladies have a well tuned ear for classic pop songs with candy sweet hooks very much in the lo-fi  ‘Girls In The Garage’ vein.  And indeed it’s the strength of September Girls song writing  as demonstrated by the chiming Shangri La’s meets early Creation fuzz pop of  ‘Hells Bells’ the yearning beauty of ‘Wanting More’ or the expansive chiming shoegaze anthem of ‘Green Eyes’ that elevate them above other bands ploughing this particular musical furrow. 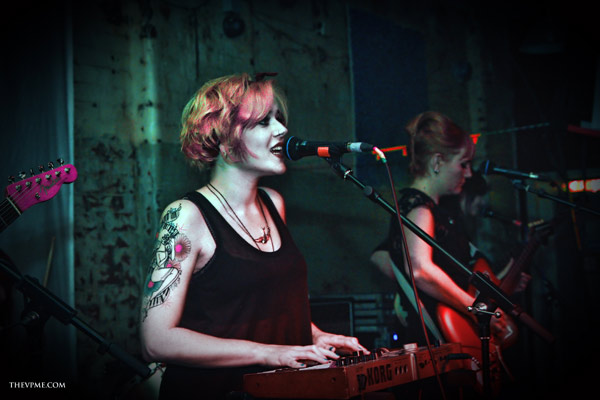 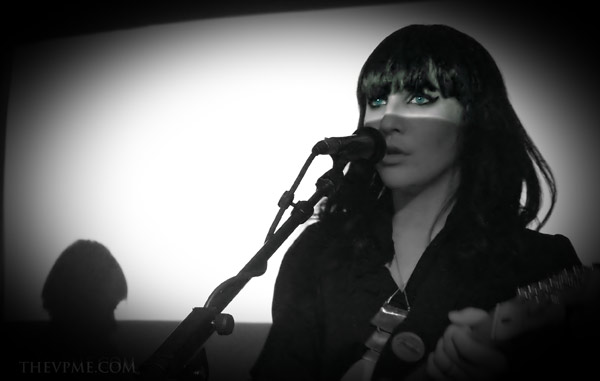 By the time PINS hit the stage the Soup Kitchen was nearing full capacity and although the band aren’t quite yet in a position to be welcomed back as world conquering homecoming queens, the place was certainly buzzing with anticipation.  Projected images, which formed the stage backdrop added to the sense of occasion, all apparently filmed by bassist Anna Donigan including a crystal growth sequence, a billboard outside the city’s Quaker house and stills from ‘The Lady from Shanghai.’  However, it’s the sheer quality of the band’s songs and raw power of their performance that yet again shone through like a beacon. 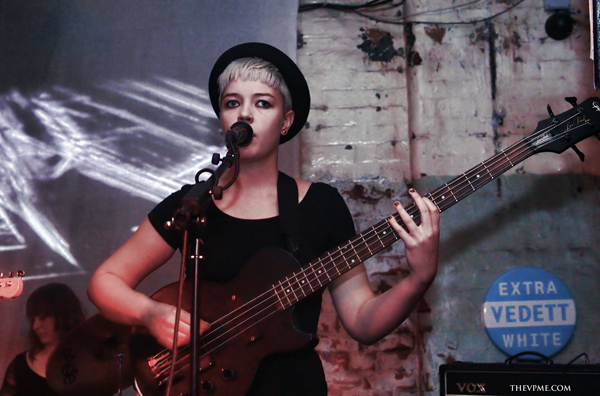 New songs such as ‘Waiting for the End,’ ‘To You’ and ‘Kiss Of Death’ prove beyond reasonable doubt that PINS are very special indeed and are already beginning to effectuate their huge potential!  Despite the bands ‘cool as fuck’ image they do have a great sense of humour, for example when drummer Lara Williams battered her way through a snare drum recently she commented “the only victim was my femininity.”  The band clearly enjoyed themselves with Faith and Anna exchanging banter after a couple of false starts on ‘Say To Me’ following a call to arms for the audience to dance.  When Holgate sang another new song ‘I Want It All’ there was an air of universal agreement that this band deserve to have it all.  As we’ve said before, PINS are a band to believe in, and as such should be cherished.  If you’ve yet to  catch them live, then clear your diary, cancel your meetings, arrange babysitters, get divorced if need be…  ;)  do whatever it takes and try to catch them live, and then get set to be blown away by a Mancunian hurricane!  The remaining dates are as follows ; 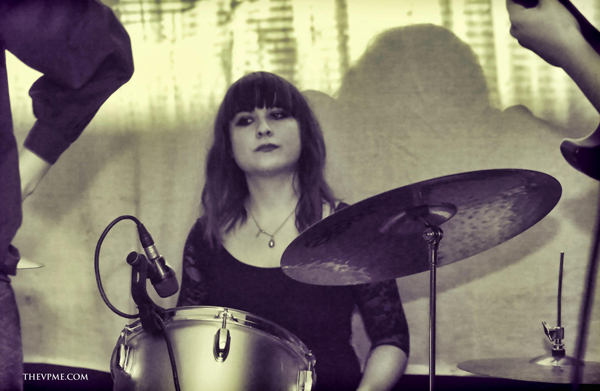 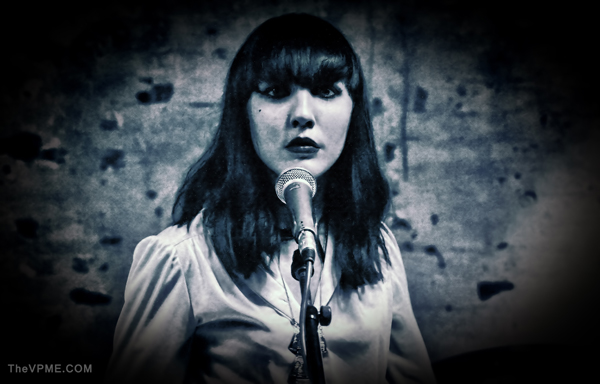 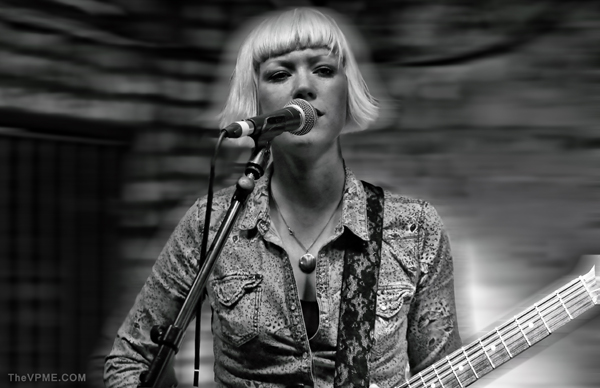