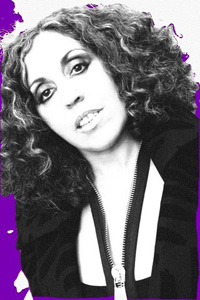 Poly Styrene, the unforgettable front woman and iconic face of the seminal band X-ray Spex has announced her return to the music scene.P oly will release a free download ‘Black Christmas’ on December 20th through Year Zero, followed by her debut solo album in March 2011. Entitled ‘Generation Indigo’, the record was produced by Youth (The Verve, Killing Joke, The Fireman, Edwyn Collins).

‘Black Christmas’ is a non-album track which was written by Poly and her daughter Celeste (who also sings on it) when they heard the news about a man dressed as Santa Claus killing people in LA, also reflecting the start of the recession, it is a tongue-in-cheek, anti-Christmas song.

“Poly Styrene… so ahead of her time.  X-ray Spex, a band that shaped my identity.” Beth Ditto (The Gossip)

Wheels – “Feel About Me”

Wheels are George Runciman (Vocals/Guitar), Felix Howes (Guitar), Yacob Andersen (Bass) and Stirling Mitchell (Drums), a band of fresh-faced London boys who emulate Britpop cool and create credible guitar pop – think Blur, not Busted. ‘Feel About Me’ is a powerful, edgy, melody-fuelled début, which pays homage to bands such as The Kinks and The La’s.

Now here’s a band who should be f**kin massive next year! Glittering dark goth pop with a hint of Bauhaus meets a male Siouxsie at a Bowie convention -Amazing!

Islington Boys’ Club are a North London based four piece. They met through mutual friends through the East London live music scene. Although according to Ed the drummer, lead singer Andy ‘was a special acquisition, as we were the first band he tried out for when first arriving in London having been introduced by his sister who told us about him before he moved over from overseas’. Singer/ performer Andy Lovelee is quite the front man, challenging and bold, just like a young Bowie, making IBC stand out from the crowd with each performance a spectacle to watch, completely captivating.

Cruella Ribbons – “Sunshine To My Showers”

The Chemistry Set –“She’s Taking Me Down”

Psychedelic-Pop band The Chemistry Set have quite a history.  Flexidisc kings and veterans of the Imaginary label (Chameleons, Cud, plus countless sixties tribute albums), they helped pioneer the late 80’s neo-psychedelic boom that was a pivotal phase in pop music history leading to the Madchester craze unfolding locally around them, and its quick absorption of electronic music. Indeed counting Factory & Hacienda boss Tony Wilson amongst their fans, The Chemistry Set reached the coveted Indie Top 20 as they were featured in both UK mainstream and underground music press. Receiving regular airplay on the legendary John Peel’s show (Peel even went so far as to sending the band a hand-written fan letter!), they also toured globally but have held a deep fondness for Spain, making lifelong friends there. The band split in 1991, took a bit of a hiatus, remaining silent… until The Chemistry Set “MACH II” remarkably reappeared in 2008! Their return came about when their unreleased LP from 1989 “Sounds Like Painting” somehow was uploaded onto numerous blogs and was downloaded over 10,000 times.

The Ravenna Colt- “South Of Ohio”

The Ravenna Colt is the solo project by Johnny Quaid, a founding member of My Morning Jacket who performed on the band’s first three albums, “The Tennessee Fire,” “At Dawn” and “It Still Moves,” as well as countless EPs.

The video for “South Of Ohio” was shot this past July in Oldham County, Ky,  sadly I’m English and therefore have no idea where Ky is, but I may have bought their jelly once or twice.

We put these lads on when we did gigs in that magical place we will one day call ‘pre Coalition government land’ .   Mind, they must be doing ok as the press release says “Sensorites are brothers Natham & Gareth Kirkham originally from Stoke-on-Trent but now living on the Mersey.” Now I’m no sailor but in order to live “on the Mersey” one would assume some sort of house boat is required? Anyway here’s their new single.

Retro Track Of  The Week