This week ;- Chapel Club, The Good Natured, Marina & The Diamonds, Rose Elinor Dougall, Delays, Catherine AD, The Shills, The Kiara Elles, The Pains Of Being Pure At Heart, Paloma Faith and Magnapop

THE GOOD NATURED- ‘Your Body Is A Machine’

New video and song which has us dancing with excitement!

Dunno about you but I’ve noticed an increasing tendency for people at gigs to talk LOUDLY or make stupid noises throughout songs, not only is this annoying for customers who’ve paid to see a gig, but it’s f**king rude…here Marinas having none of it , we salute her ! ( At about 1minute fifty one she tells an annoying oik what she thinks of him. )

Video for ‘Find Me Out’ by Rose Elinor Dougall. Taken from the album ‘Without Why’ released through Scarlett Music 30/08/10

Many of Catherine’s recordings are yet to see the light of day and, to date, the sole commercially available release is the Carry Your Heart EP, which saw the NME style her as ’kooky and spooky and very good’ and Metro acclaim ‘a voice that sounds like a lake of black honey’. With musical tastes formed by a childhood exposure to the opposites of Nirvana and The Carpenters through a car stereo on long journeys, it seems inevitable that Catherine’s music should encompass both the darkness and soul searching of Cobain’s lyrics with the deft melodic touches of the Carpenter siblings.

Her forthcoming collection ‘Skeleton Songs’are pared down to the bare bones, recorded in a bedroom atmosphere that emphasizes the quality of the air between the instrument or voice and the microphone, leaving all cracks and creaks audible to the listener but capturing that essential moment of creation on tape. The songs you hear now may one day reappear in bigger, shinier form but, at this point, they capture the essence of the remarkable voice and the compositional power of Catherine AD.

The Shills have just released their new Sweet Inertia EP on CD & Itunes download through R*E*P*E*A*T records. Here’s the video… 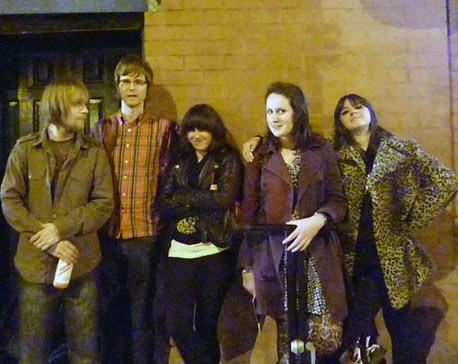 Who we love don’tcha know, have released a limited edition version of their stunning debut ‘Slide Over’ with a lovely faux fur cover (rumoured to be made from Chiara’s coat) Available HERE

Here’s 2009’s ‘Odio’ which is also on the album we described as “At it’s best “Slide Over” dances on the grave of landfill indie with its fusion of beats and angular guitar work in which the Elles manage to combine the finer aspects of new wave, electro, punk and pop. It’s accessible, melodic and possibly cooler than the Fonz’s cryogenically frozen thumb undergoing Bose-Einstein Condensation.”-

THE PAINS OF BEING PURE AT HEART …..

are set to release new single Say No To Love for no greater reason than it’s a summer hit in the making. Check out their brand new video, for an old lead track from their last EP ‘Higher than the Stars’.

Some videos come along and you can’t help but say ...’What The F**k were you thinking?’ The Drums new video for their latest single ‘Forever And Amen‘ is a prime example of such a scenario. For some reason the whole sorry affair puts me in mind of a ‘ well hard’ version of Haircut 100 dancing like Ian Curtis to New Order off cuts. One feels this video may be a prime candidate for a chuckle or three on ‘Never Mind The Buzzcocks’ in a year or so…possibly the most rhymically challenged dance moves I’ve seen outside of somebody on crack suffering from St Vitas Dance after a hip replacement, breakdancing – Odd indeed..

Sound City Festival has just started in Liverpool again this year, alas following a change in PR company our press accreditation was cocked up. Either that or they hate us… 😉 . Anyway looks like our one and only gig at this years fest was last nights. Paloma Faith , which was like 3 gigs rolled into one anyway and was quite wonderful. Review will be up soon but in the meantime….

Retro Videos Of The Week