The “Phantoms ep” is released 31st October digitally from the highly promising Liverpool based , Bird. Fronted by 22 year old songstress Adele Emmas they are influenced by the likes of laughing Lenny Cohen, Kate Bush, The Cocteau Twins, PJ Harvey. The timing is of course no coincidence as Adele explains “We knew we wanted to put Phantoms out as our first release from day one, it’s already become our signature track live. We decided when we first recorded it that the lyrics and mood of the track leant itself perfectly to a Halloween release.” 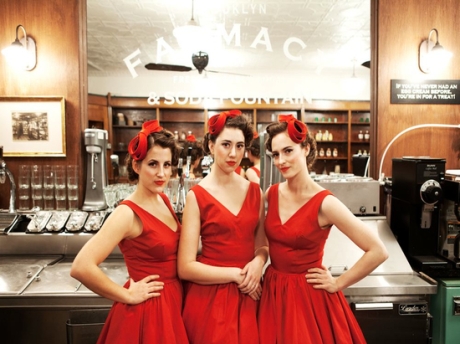 “Ricky Dee” By The Bandana Splits.

Just the right side of cutesy, freshly minted Brooklyn doo-wop retro trio The Bandana Splits release a new single that’s possible more infectious than the laughter that greets David Cameron when feigning sincerity. As huge fans of the girl group sound The VPME gives resounding thumbs up to this incredibly catchy ditty which is kinda like the Pipettes meet the Puppini Sisters on the set of West Side Story and therefore by definition, great fun.

‘When The Tide Creeps‘ –ELLEN AND THE ESCAPADES.

Ellen and the Escapades release a new single ‘When The Tide Creeps In’ on October 24th through their own label, Branch Out Records. The band first rose to prominence in 2010 when they won the Q Magazine / Glastonbury Emerging Talent Competition and played the BBC Introducing stages at Leeds and Reading Festivals. Their debut EP followed later that year and saw them sell out headline shows across the UK.

Not much more we can say about Dum Dum Girls new album, we gave it a perfect ten and ‘Bedroom Eyes’ is quite frankly a wonderful example of their all round awesomeness.

“Together For Ever” –TWO WOUNDED BIRDS.

Margate’s fave surf punk power pop quartet return with yet another rollicking, fast paced gem. Yeah, yeah I know, they do take inspiration from a certain band, but that is in no way a bad thing. In fact US music legend Seymour Stein went as far as declaring them the ‘best band since The Ramones’

‘Paper Forest’ by EMMY THE GREAT.

She even interrupted Lammo on six music to say hello to us recently!

Kyla will be popping up on our next podcast, in the meantime here’s the video for her new single.

‘See Saw Sway’ is from ‘Ninth‘ the latest album from the godfather of goth Peter Murphy and his first solo album since the successful Bauhaus reunion tour in 2005. His voice is still full of brooding menace and he manages to retain his dignity even when wearing what appears to be a tea cosy on his noggin in the video below!

We’ve blogged about Iam In Love a few times now, and they are set to release a free EP in November which includes a VPME fave –“ Call Me An Animal”

Not much info with regard to Red Kite and the bands official bio is interesting to say the least but tells us bugger all about them. Still, enigmatic is good. Bio- “Once so common that Shakespeare described London as “a city of Red Kites and Crows”, the Red Kite (Milvus milvus) was persecuted and hunted to extinction throughout the 18th and 19th centuries. Its reintroduction, initiated in 1989 by the RSPB and the Joint Nature Conservation Committee, is now the most successful reintroduction of any bird species in Europe. In 2006 The Independent newspaper reported the first sighting of a Red Kite over London for 150 years.”