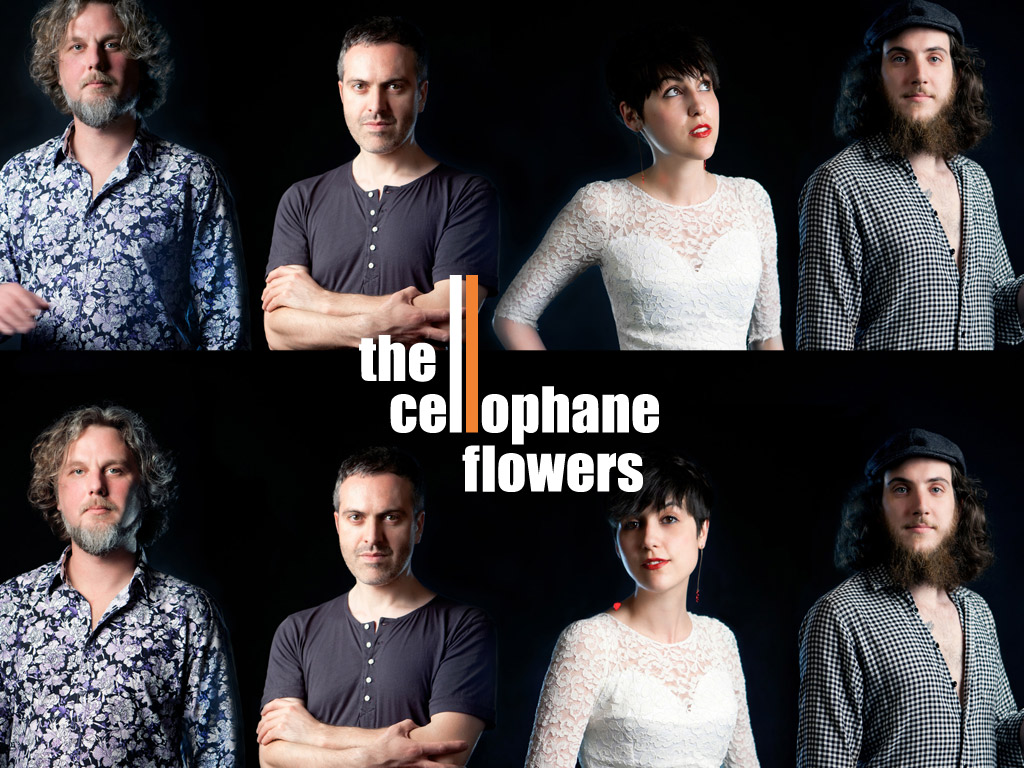 London based quartet The Cellophane Flowers début album ‘Staring at the World’ could arguably have been released at any point during the last twenty years.  It’s an enthralling mix of female fronted, occasionally quirky, indie pop garnished with some interesting psyche flourishes, and it manages to pull off the trick of sounding familiar yet paradoxically vibrant and fresh.  Opening with the haunting jangling beauty of ‘Voices’, replete with Francesca Corradini’s plaintive accented vocal which occasionally has a slight Tina Lattanzi performing Marlene Dietrich ring to it,  it’s an album that slowly draws you into a swirling journey through a time warp of great indie guitar music.  One in which the band’s influences are apparent but  they never sound remotely pastiched, due in no small part to an ability to take the listener in new and interesting directions.

Take a song like  ‘The Promise’, one Fra has described as the only political song on the album- there’s certainly an initial nod to the Psychedelic Furs ‘All That Money Wants‘ but then it twists and turns morphing into something akin to a strident, rebellious sounding Carla Bruni fronting Echo and the Bunnymen.  Which is of course by definition a fabulous proposition, and that essentially is what The Cellophane Flowers do so well, they drill down to the best of indie guitar music, harking back to a time when the indie scene had energy, vibrancy and crucially, decent tunes!  A time when it may have borrowed from the past but didn’t simply recycle it and mix it with that irritating vapid hipster faux cool aloofness!  They may be ploughing what many may feel is a well worn furrow, but The Cellophane Flowers have distilled their influences and planted new seeds to produce an ebullient and vibrant crop of tunes that reflects their own world view. We had a chat with Ian the guitarist just before the annual arrival of Mr Claus and his bulging sack…. and here’s what he said!

VP:   Traditional opening question, tell us how The Cellophane Flowers came into existence?

IAN: Nick and I played together in a previous band, and then we found Francesca in a pub, then Luca in another pub.  Even though we have different tastes, we all got the idea of what The Cellophane Flowers is about.  It was a slow formation though…

VP:  Following on from your debut EP you’re about to release your debut album ‘Staring at the World’ did it feel like a long gestation period developing the songs, before finally “getting them out there”

IAN:Yes.  Some of the songs are actually older than the songs than we had on the EP, but we needed to develop our sound further and have the right producer to do them justice.  Lucky Day and Rock’n’Roll are as old as the band.  The Promise, on the other hand, was only written towards the end of the recording process.

VP: What would you say are the major obstacles to a bands / artists getting album releases, any advice for aspiring young artists?

IAN: The music industry, the economy, download culture…these are all things that make it difficult to make a living from music.  But anyone can get a release out if you want to go DIY and the internet means there’s always a good chance that the cream will rise to the top.  Advice, do it yourself!

VP:  The album captures a few different moods and there are some intriguing lyrics for example “The Promise” has the line “close your heart open your legs” what are the ideas behind it?

IAN: That song is about being turned over by them that have the power, but “the government are a load of lying bastards” doesn’t make for a great chorus.  So it’s kind of mixed up with metaphors about gambling and joyless sex.

VP:  How did you go about recording the album was it done as one block of time or done over a longer period?  (If it’s the latter, is it difficult to keep the cohesion?).  What are your memories of the whole process?

IAN: It was done in stints, I guess, over about twelve months.  It wasn’t that hard to keep the cohesion going, we’d rehearsed and rehearsed the songs before we went in to the studio and we built each song from the ground up.  Dave (Allen, the producer) kept it all on track – he was on a mission!  Memories?  Marathon’s are hard work, lots of sitting around and waiting, dodgy takeaway food, beers to end the day.

VP:  Inevitably, we’ve reached that point in the interview where we ask about influences.  Which bands / Artists do you think have influenced your sound, and are these the same ones that inspired you to form a band in the first place

IAN: We’ve tried to steer clear of the bands that really inspired us to form a band, but those influences show through anyway.  Bands that have definitely influences our sound I’d say are Sonic Youth, Velvet Underground, Broken Social Scene, the Cure, and Innocence Mission.  There’s more!

VP: Given we have a government who see everything as an economic unit, and appear to have the arts pretty low on their list of priorities how would you persuade these toffee nose philistines  that music add values to people’s lives in more ways that just a set of figures on a balance sheet

VP:  You’ve recently played an album launch show.  How did that go?

IAN: It was a great night, we love playing those tracks, and to do an album play was cool.  It made the release seem real – it’s out there now!

VP:  What’s been your weirdest gig so far as a band?

IAN: We played a village festival once.  The less said about that the better.

VP:  Finally five words to sum up ‘Staring at the World;