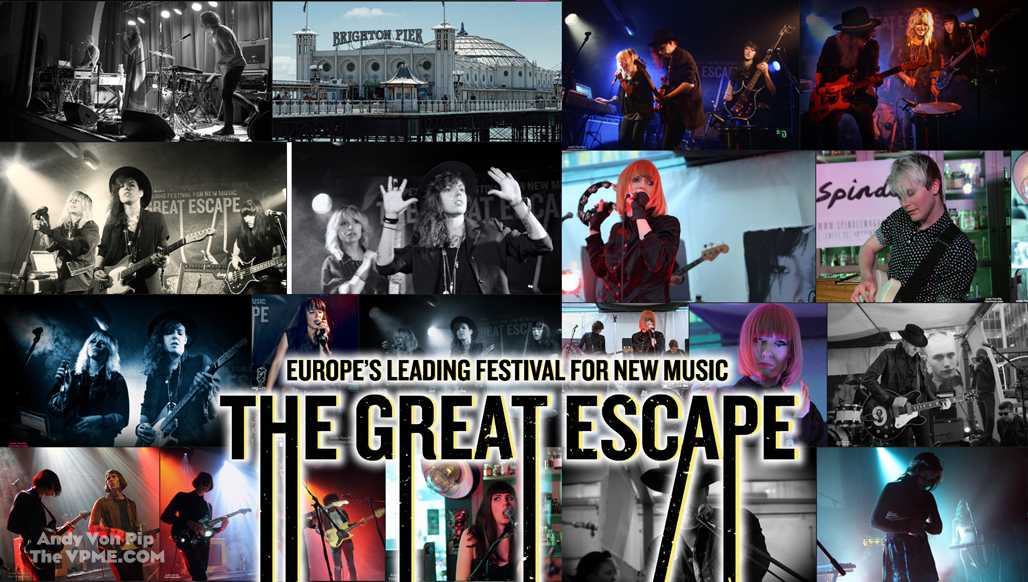 The Urban music festival has much to recommend it.  Access to proper loos for example, a comfy bed at the end of the night and the reassurance that in the event of the heavens opening the terrain underfoot will not suddenly be transformed into a foetid, agglutinative quagmire.  The Great Escape is arguably the urban festival by which all others are judged, and after what turned out to be a shorter than anticipated first visit, we can see why.  The Great Escape’s reputation is well deserved, it’s a festival that’s welcoming, extremely well organised and one that showcased a veritable who’s who of bands we’ve previously showered praise upon.  What follows is a brief synopsis of how our “Great Escape” unfolded.

Well we’ve blogged about them, interviewed them, played them on the radio, recommended them on BBC 6 Music, but we’d yet to see them live.  Sophie, Franca, and Sara are the creative driving forces behind Velvet Two Stripes and at the Swiss music showcase, the trio from St. Gallen confirmed beyond reasonable doubt that our faith in them was absolutely justified.  They produced an astounding set, if you see a better guitarist than Sara in the next few years do let us know because the sounds she manages to coax from her guitar are frankly, fucking amazing.  With her sister Sophie’s smoky honey cracked vocals and Franca’s thundering bass lines their edgy blues tinged rock n roll was a perfect start to The Great Escape.  And just when we think, things couldn’t get any better we’re informed that the bar is free!  (the payback came later, although not in monetary terms)

Following on from Velvet two Stripes came Peter Kernel a Swiss/ Canadian art-punk band who managed to sound simultaneously like Delta 5, The Au-pairs, jap-pop, Placebo and XTC.  They were energetic, passionate, menacing, and charming and although it was only 3.00 in the afternoon they invited everybody up on to the stage to “get naked and dance,” it was that kind of set. Even though this is Brighton, there were few takers but these Swiss sure know how to throw a party.

After more free beer and a bite to eat, we wandered around aimlessly attempting to find the next venue and finally located The Mesmerist as Curxes took to the stage as part of ‘The Alternative Escape.’  To describe this as a music venue in the traditional sense would be akin to calling George Osborne a man of great compassion and integrity.  To call it a pub with some amps and speakers is probably a more factually accurate description.  The sound system may not quite have been up to handling Curxes singer Roberta Fidora’s powerful Siouxsie meets Yazoo style vocals, but the band were impressive and despite the oddness of the venue they powered their way through tracks such as ‘Spectre’ and ‘Haunted Gold’ with some panache.

Upon leaving the Mesmerist, we discovered to our horror we’d missed Findlay at the Blind Tiger.  Dejected we turned the corner and heard a familiar sound…..mesmerising, hypnotic…  dark….  Black Music.  VPME faves Dark Horses and their leather-clad acolytes appeared to have set up base camp in a small square in Brighton and were converting non-believers to their cause.  Lisa Elle and her logoed biker jacketed gang weaved their magic over a sizable crowd who seemed to be discovering “the lightning is within them.”  It’s the third time we’ve caught them in the space of a few weeks and this was our favourite performance to date, their dark hypnotic mix of shoegaze, electronica and Krautrock combined with a stunning visual aesthetic, made this an immersive 360-degree experience.  As the effects of the free bar became apparent, we wondered who in the assembled throng was a Dark Horse and who wasn’t.  Maybe we all were.

We then hotfoot it to the aptly named “Haunt” were Austin synth-gazers Feathers had just started their set.  We’re confident we could have produced a more pleasing lighting show using a small travel torch and a box of Swan Vesta as the band were barely discernible through a gloomy blue L.E.D haze.  This didn’t really create much of an atmosphere but thankfully, the band were impressive as a live unit and produced a beguiling set from their fabulous début album.

Charlie Boyer and The Voyeurs @The Haunt

Next on stage came the hotly tipped Charlie Boyer and The Voyeurs, a band we have so far been unmoved by.  This may be due to the fact that we’ve never been completely sure about the vocals, which occasionally come across as something akin to Larry The Lamb being drown in a tin bath whilst channelling The Velvet Underground.  However, as a live unit there was a definite understated charisma about these chaps and enough chunky guitar riffs and swirling Hammond organ to keep us happy.  Their new single, the Richard Hell meets The Dandy Warhols infused ‘Be Glamorous’ was the stand-out tune of a rather impressive set.

The effects of the free bar (topped up by the not quite so free bar) had now performed their dark magic and we decided to hit one more venue before heading into the loving embrace of the singularly unfunny Lenny Henry back at the Premier inn.

The Brighthelm was another odd venue, which looked and felt like a harvest festival rather than a musical venue ( probably because it’s a church.)  On stage were Finland’s finest exports Husky Rescue who appeared to have filled the stage with more equipment than NASA’s mission control.  Their strange hybrid of minimalist left-field electronica laced with wonky Scandipop was a great end to the evening and they demonstrated just why they have been such an enduring act over the last eleven years.  Always ready to try something new, Husky Rescue sounded as fresh and as relevant as when they first arrived on the scene.

Finally, we accepted defeat and decided it call it a night, and sadly, a domestic emergency meant our stay at The Great Escape was cruelly cut short.  However, we intend to give The Great Escape the full hit next year because on the evidence of our short stay, Brighton really did rock :)