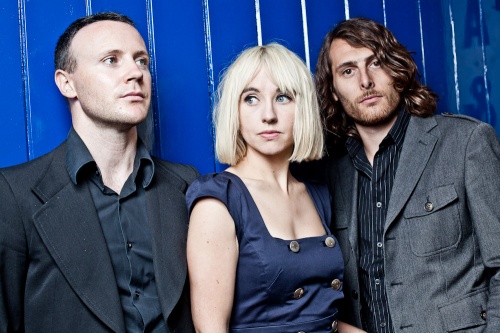 ‘Austere’ By The Joy Formidable.

The Joy Formidable have garnered a fearsome reputation as being one the UK’s most thrilling bands on the live circuit with the trio of Ritzy Bryan, Rhyddian Daffyd and Matt Thomas almost transforming themselves into a collective force of nature when on stage.  I’ve seen them a number of times at various stages of their career and they have never failed to blow me away.  The question now is  can they transfer the incredible, mind-blowing energy and  power of their live shows  on to their debut album ‘ The Big Roar’ or will the confines of a studio, as can happen with some bands, blunt their edge?

The album kicks off with the 7 minute 45 second sonic behemoth that is ‘ The Everchanging Spectrum Of A Lie’ and it’s soon pretty apparent that not only have they captured all the heart, emotion and hugeness of their live sound, they’ve added to it, producing an album that has even exceeded my own vertigo inducing expectations.  It’s a HUGE sounding album that reaches epic proportions without even trying and is perfectly executed on every level.  And there’s no let up , from start to finish. The thrilling blistering sonic fury of ‘Magnifying Glass’ is followed by the equally magnificent ‘I Don’t Want To See You Like That’ which sees Ritzys picth perfect vocals framed by a frenzied jangle of barbed guitars and thunderous drumming.  Rhyddian  takes on lead vocal duties on the slightly slower, intimate  ‘Llaw=Wall’ which works incredibly well, and then it’s back to Ritzy to ratchet things up a notch on the fantastic angular punk thrash throwback that is ‘Chapter2’

Old favourites ‘Austere’, ‘The Greatest Light Is The Greatest Shade’ , ‘Cradle’ and ‘Whirring’ get a thorough reworking, the latter finishing  with magnificent guitar jam that makes the likes of  Led Zeppelin and the Sex Pistols sound like fey acoustic folk troubadours. Doubtless there will be those, who with the  dreary inevitability of the musical librarian clucking ‘I preferred the original versions’ but really, lose the hipster credentials for a minute, we know you followed the band before they were even formed and actually listen. Because  these versions are just perfection.

Amongst the fury, the power and the often giddy pace of the album, The Joy Formidable manage to stir something deep inside you, connecting  an emotional level, filling you with a sense of euphoria and ultimatley  leaving you to ponder just what is it about  such a magnificent noise that is so incredibly moving and life affirming ?  It’s also an album that in time may well be cited as an inspiration for many future bands, because it really is that good. Just weeks into 2011 The Joy Formidable have already thrown down the gauntlet in the album of the year stakes.   On the sublime ‘A Heavy Abacus’ Ritzy sings ‘ Happiness, it won’t last long’ well maybe not, but goodness while it does last, the joy is truly formidable.

People wiser than me often tell me, somewhat sniffily, that under no circumstances should you ever bestow an album with a maximum  10/10 rating,  to do so apparently contravenes some sort of unwritten law of music snobbery. Really ? Well get this… 10/10

And get this … The album here.

8 thoughts on “The Joy Formidable – The Big Roar”