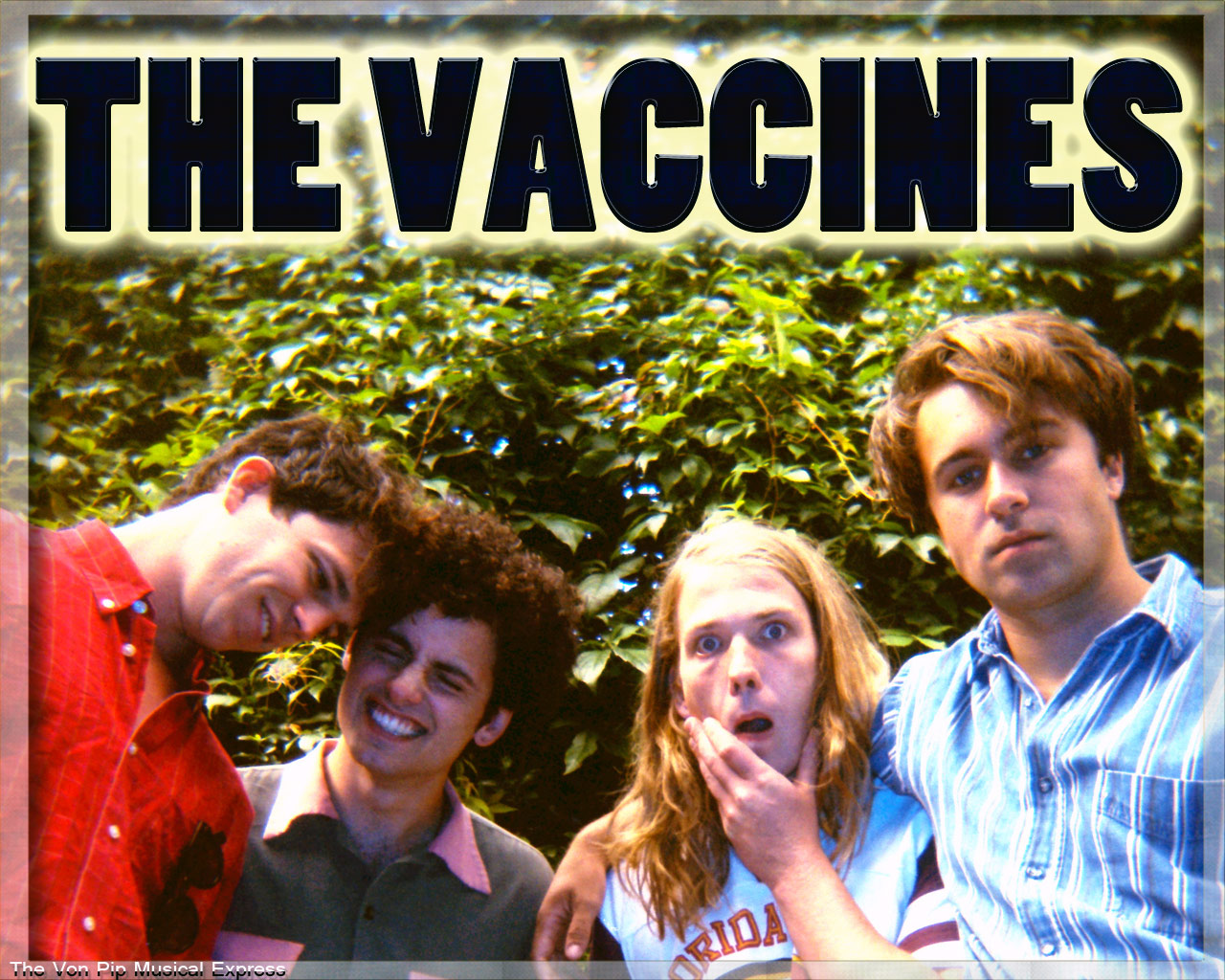 The Vaccines are currently one of the most talked about new bands in the country and are set to be at the vanguard of next year’s predicted resurgence in popularity of guitar music.  Before a song had been released they had already appeared on “Later with Jools Holland” and are set to embark on the NME awards tour in 2011.  But hang about, there are some folk who remember the tsunami of hype that engulfed and eventually destroyed the likes of Joe Lean and the Jing Jang Jong, and they may be forgiven for thinking The Vaccines talents may have been somewhat overstated.  Rest assured we at the VPME  are born cynics, although possibly not as cynical perhaps, as a pre-election politician pledging to oppose tuition fees, but we too find ourselves somewhat impressed with the songs The Vaccines have thus far made available for public consumption.   ‘Wrecking Bar’ checks in at around one and a half minutes, whilst the Spectoresque  vibe of “Blow it up” and “If You Wanna” all serve notice that here is a band who might just have the songs to match the hype.

After months spent honing their sound  The Vaccines look set to make a mark in the coming months.  We spoke to the artist formerly known as Jay Jay Pistolet – Justin Young, about the band, how they deal with hype and what the future holds.

VP:  Hi there, first question maybe an obvious one but what caused Jay Jay Pistolet, at the height of the so called Nu-Folk popularity to hang up his acoustic guitar and embrace the warm fuzzy euphoric glow that is The Vaccines?

JUSTIN :  Creatively I hit a brick wall. I’d started to becoming quite disillusioned with what I was doing and a friend asked me if I wanted to start a band with him. I didn’t have the drive or the focus on my own and I wasn’t feeling creative. Also, my life as a solo artist was circumstantial. I moved to London and didn’t have any friends to play music with so I ended up playing quiet songs on my own. I think when you want to do something new in life, you have to do something completely different or you won’t feel the desired effects. So, whilst the sound has never been contrived or calculated, the decision to do something completely different was. Also, just for the record, the height of my own ‘nu-folk’ popularity was about 2ft.


VP:  In July you played a secret gig as “the Red Indians” because, the story goes you hadn’t decided on a name. What made you finally settle on The Vaccines, is there any deep philosophical meaning or did you just like the way it sounded?

JUSTIN:  A lot of people probably think it holds connotations of punk rock or drug abuse. Or they at least think that’s the impression we’re trying to give off. It’s not a loaded name at all. I love the simplicity of it. I was reading and I came across the word. I was amazed ‘the vaccines’ weren’t a household name already. I think it’s a classic name. The Vaccines could be a 50s rock ‘n’ roll group, a 60s garage band, an 80s hardcore band. I think it transcends genres and eras. And in that respect, and in terms of simplicity, I’d like to think that it sums our band up rather well. Actually, I was worried about being in a ‘the’ band, but there you go.

VP: Your recent live hometown debut @ the Flowerpot in Kentish Town resulted in rave reviews how was it for you?

JUSTIN:  It was very fun for us but no more so than any other gig. The encouraging thing for us was that we had been worried it would be a stale industry affair as we didn’t know if any real people knew about the band then. But, as it turned out, we packed it out with kids and real music fans and that was a very gratifying experience to see people genuinely loving it for it for the first time. I think a lot was expected of us at that gig and i like to think that we rose to the challenge. Hopefully we can continue to do so.

VP:  Your ace debut single the double a side  ‘Wreckin’ Bar (Ra Ra Ra)’/’Blow It Up’ definitely has a Ramones/ Mary Chain/ Phil Spector/and even a Clash type vibe to my ears and has certainly got people very excited.  Does it worry you at all that media hype too early on may be a burden, is it difficult to ignore and just concentrate on doing what you do best?

JUSTIN:  It can be a burden. Once people make grandiose claims and feed people hyperboles about a band, the band is forced to live up to other people’s expectations and not their own.  Equally, just as many people are likely to dislike a band as they are to like it because of hype. That said, we’re very excited by and grateful for the media attention we’ve received. It’s important to remember that it has been generated by genuine excitement by the music and that makes us happy. We worked very hard to get our set of songs to the point at which we were proud of them and happy with them. We loved them before validation from any 3rd party and we will continue to love them if that disappears. We’re playing no part in any hype that may be going on. We’re just playing shows and making our record. We don’t read any press either. I think the minute you start worrying about or believing what others think, however good or bad, your art suffers because you start questioning what it is that you do.


VP:  When can we expect a debut album? Have you a working title and have you enjoyed the recording process?


JUSTIN:  The album will be out early next year. Pretty much everything is done bar naming it! The process has been really fun. We’ve done it in a quick and energetic manner. We wanted to capture the energy and excitement we all have so we recorded live with very few overdubs. For example, I was allowed to run about the studio with a cheap old microphone and no pop shield. That said, it’s not a punk rock record. It is undoubtedly a pop record, but the process never felt too controlled.

VP:  Your calendar looks very busy for the remaining part of the year what are you looking forward to most in 2011?

JUSTIN: We all just want to tour. That’s why you start a band. it’s great we’re receiving attention from the media etc but the best way for a band to build a solid fan base is by touring anywhere and everywhere and that is what we intend to do. We have a collection of songs we love and so we want to share them with people. We want to be the best live band we can be and then make an even better second record.

VP:  If we came back and spoke to you at the same time next year, what would you have hoped to of achieved musically?

JUSTIN:  Maybe I answered that previously, but I’d like to be able to say we were a great live band and I’d like to think that we’d be making decent headway with regards to writing the next record.

VP: You were recently on Jools Holland before you’ve even released a single, how did you find that experience?

JUSTIN:  It was pretty amazing and an honour to play. Whilst it was very early to be on the show, it’s not like we’ve been posing on magazine covers or anything like that. As I said, there is no better way to win new fans than by playing your songs for them. We saw it as an amazing opportunity to try to convert more people to our music. That’s what it is all about at the end of the day.

VP: Have you had a chance to listen to much new music this year and if so who has impressed you most?

JUSTIN:  I don’t listen to much new music. The Walkman released a good record this year. I like the wild nothing record too.

“Blow It Up” By The Vaccines

0 thoughts on “Meet The Cure… The Vaccines Interview”