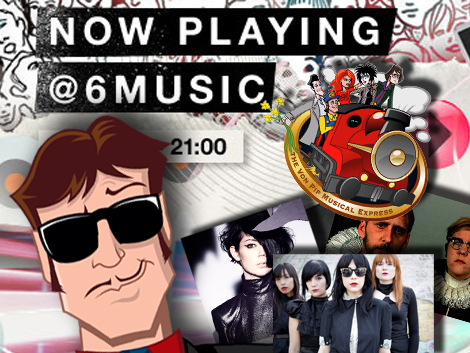 It’s been a bit quite here lately. This was due in no small part, to a trip to Italy and a wish to never return to Blighty and her relentless grey skies.  However return we did and almost immeadiately made our second apperance on  Tom Robinson‘s Now Playing @  BBC 6 Music

If you missed us on BBC6Music you can listen again here (at 22 minutes and 53 seconds) http://www.bbc.co.uk/iplayer/console/b013z70r. We get over excited about our top tip for 2011 The Good Natured, wax lyrical about Prince Edward Island and swoon over Dum Dum Girls amazing new album whilst giving their new single ‘Bedroom Eyes’ a spin.

We also wrote a blog for the Beeb here  or if you have time you can read the unedited waffley version, below.

Reasons To Be Cheerful

Statistically September* is the month when the post holiday blues kick in with a vengeance , but let’s face it, summer in Blighty is no great shakes. If experienced warm sunshine for more than two consecutive days this year you were more than likely abroad. Yet again our great British summer weather seems to come in two flavours, wet and wetter. But we are a stoic bunch and this is where the uplifting effect music has on the human psyche comes into play, I mean seriously, for what other reason would you feel compelled to gather in a muddy field with thousands of other people, totally exposed to the elements other than to enjoy (and endure)  the music festival experience?  Then again maybe music fans are merely frustrated poets in search of their muse, for to quote James Dickey ‘A poet is someone who stands outside in the rain hoping to be struck by lightning.’

However this year the increasingly medieval conditions endured at Glastonbury has made me seriously consider a graceful retirement from festivals, after all I’m reaching that stage in life were comfort often seems so much more appealing than excitement. I genuinely don’t enjoy camping and am not one of those festival snobs who feel it’s a much more authentic experience to remain unwashed and slightly dazed whilst smelling like a farmyard animal for the entire duration of said festival.

However had I of stayed at home I would have missed Bobby Gillespie and Primal Screams blistering set, or Pulps triumphant ‘secret’ return or Emmy The Great and Ash’s Tim Wheeler performing together.  I would also have missed out on a plethora of fantastic up and coming bands  such as Sparrow, Deep Cut and Fever, Fever or see  our top tip for 2011 , The Good Natured headline the BBC’s Introducing stage. It’s been a great year for them (broken bones aside) and they are currently putting the finishing touches to their debut album which is due to drop next April.  Of course on the flip side it is also true I would not have experienced being covered from head to toe in viscious, foul smelling mud that had all the constituency of quick set cement, treacle and superglue, I would also not have suffered the life enhancing awfulness of being locked in a portaloo which made ‘Trainspotting’s’ infamous ‘worst toilet in Scotland’ look positively palatial. And of course I would have avoided being lulled into a sleep of Rip Van Winkle proportions by The Horrors, who provided possibly the most po- faced, earnest, dull Glasto set ever. As is the way with the UK festival experience the weather can make or break you and upon arriving home I did indeed feel ‘broken.’

And so as the summer and festival season comes to an end, it’s hard to believe there are now just 113 shopping days left before it’s Christmas once more!  But maybe it’s not quite time to start compiling your albums of the year list just yet, for September normally heralds the start of some frenzied activity on the album release front after the familiar slowdown during the summer months. One of the perks of blogging is that you often receive promo copies of albums months in advance of their official release. So I can state, with some degree of confidence that there should be something for everybody to look forward to in the coming months. Ladytron return with their fifth studio album, ‘Gravity The Seducer’ (12th September) which finds them at their imperious best and features a mesmerising mix of glacial choral vocals, sinister, symphonic synths and relentless driving beats. Manchester electro-indie trio  The Whip’s much anticipated sophomore album  ‘Wired Together’  (19th September)sees the band  embrace a more upbeat sound which may even have even induced Sir Douglas Bader to shake a leg on the dancefloor.   Dum Dum Girls return with their second album ‘Only In Dreams’ (September 27th) and prove that head honcho Dee-Dee is a songwriter of real depth and talent. This time around the band get the full studio treatement courtesy of legendary producer Richard Gotterer and The Raveonettes’ Sune Rose Wagner. At the risk of being accused of indulging in hyperbole it’s my opinion that in any right thinking society this album will be one day viewed as a classic. It’s quite simply a stunning collection of songs, fusing the girl group sound of yore with a modern twist whilst expanding the template set down on their lo-fi debut ‘I Will Be’ to produce a mature, sophisticated and on occasion epic sound. It will be there or there about in the album of the year stakes without a doubt.

There’s also the gritty, romantic realism of  Prince Edward Island who’s debut album has just been released.  ‘This Day Is A Good Enough Day’ is a real gem, full of twisted wit, wisdom, and sardonic observation which engages the listener from start to finish.  Keith Top Of The Pops & His Minor UK Indie Celebrity All-Star Backing Band  have also released their  ‘accidental debut ‘ album – the somewhat belligerently titled “ F*** You I’m Keith Top Of The Pops”  and features the likes of Art Brut’s Eddie Argos, Chris Cain from We Are Scientists and Jim Bob from Carter USM. It also includes the factually correct tour de- force  that is “Two Of The Beatles Are Dead” and contains the immortal line ‘If  you don’t count  Stuart Sutcliffe or the original Paul, then two of the Beatles are dead”

However the icing on my pre Christmas cake isn’t from some fresh faced whipper snappers, but instead from a band I have loved admired and revered since I was a first became interested in music. It comes in the leather clad shape of  The Jesus And Mary Chain whose six studio albums are being reissued as rather wonderful deluxe double albums, each one contains a glossy multi-page booklet with new interviews and photos two CDs and a  DVD .  So much better than an admittedly convenient, yet ultimately rather faceless, soulless mp3 download don’t you think?  Oh and I almost forgot,  national treasure and jazz hands aficionado  John Barrowman makes his bid for the Guinness Book Of Records , as he releases what one can safely assume from the title,  will be the world’s shortest album ‘Tonight’s The Night – The Very Best Of John Barrowman’ – You have been warned ;)

And there you have it, another summer is almost at an end but I hope you agree there is much to look forward to in the coming months to warm the cockles of your heart and provide musical sustenance as autumn and winter advance.

*  This may not actually be statistically true,;)