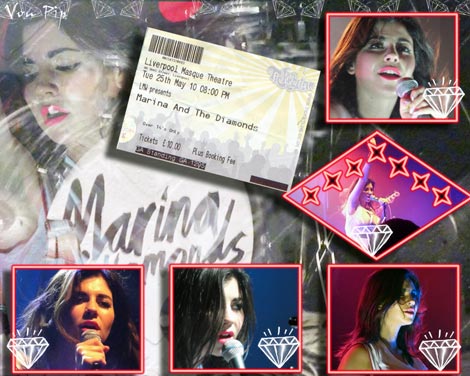 “A bit different from the last show here?” beams Marina outside her tour bus, basking in the afterglow of a triumphant gig at Liverpool’s Masque Theatre.  Marina and I had previously agreed that her visit to the ‘Pool in December 2009 definitely had something of a weird vibe, the venue seemingly full of industry types as opposed to genuine fans (aside from the hardcore ‘Diamonds’) . No such worries this evening though, because as is with most of the shows on “The Family Jewels” tour, tonight is a sell out, it seems Liverpool has finally been seduced and bedazzled by all things Diamond.

From the moment the Bond-esque video montage intro illuminates the stage backdrop you sense Marina’s upped her game and is preparing to take things to a whole new level. She was quoted recently as saying she doesn’t take her image too seriously, that it’s playful and ‘cartoonised’, and as if to prove that very point she arrives on stage resplendent in a silk printed smock featuring Bambi and Thumper! Since its release, her début album ‘The Family Jewels’ has sold over 100,000 copies in the UK, yet she still seems to divide opinion.   For some people her perceived faux-quirkiness is cited as off-putting, in fact, one critic went so far as to write “you get the impression that ­Diamandis couldn’t tell you where the nearest cash point is without crossing her eyes, blowing a raspberry and doing quote marks with her fingers every other word.” As amusing as this image is, it’s a rather unfair view and one that certainly doesn’t represent the reality of Marina as a live entity. Yeah, yeah, she sings a high pitched “cuckoo” on one song and has a penchant for ironic knitwear shaped like sheep, but she hardly bounds on stage astride a pogo stick, wearing comedy antlers  roaring, “Oi, I’m fucking mental me!!”

The truth is Marina employs less artifice in her live shows than many of her flashy and dare I say gimmicky, electro pop contemporaries.  There is no faux mysticism here, no scented candles, new age wankery or any of the usual bollocks du jour; the focus is primarily on the songs, and Marina’s voice. I will yield to nobody in my view that she posses a wonderful, rich emotive voice, although I will concede that songs such as tonight’s opener ‘Girls’ don’t really do it justice. In many ways it’s the polar opposite of La Roux’s shrill, cold, tinny mewl, yes its unusual, yes it’s different but I suppose if you’ve been lobotomised by utterly plastic, vapid, soulless singers on so called ‘talent shows’ then you may find Marina’s voice a little challenging. Then again if the X-Factor’s your benchmark of quality you’d probably find tying your shoelaces unaided a bit of a challenge.  Strange how critics bemoan a lack of originality, yet when a performer dares to deviate from the narrow parameters of ‘pop’ they get criticised for it? And let us never forget it is so much easier to be critical than to be correct.

Tonight Marina demonstrates that not only can she put on a fantastic show, but she also has the ability to write the sort of pop songs that would certainly induce Sir Douglas Bader to tap his imaginary toes with unbridled glee.  However these aren’t just fluffy pop songs about falling in love with a duplicitous loser that  elucidate the dispiriting post-feminist take on equality , the  tale of  how she’s ain’t gonna take it no more and how she will win him back by  empowering herself by, um, taking up pole dancing and wearing a ‘badass’ thong.  Nope, there’s more to Marina than that,  and she’s always attempted to address issues which are close to her heart, loneliness, isolation, consumerism, buying into the pretence of body perfection and the portrayal of women in the music industry and society in general.  Many of her ideas may still be evolving and some sniffy critics have sniped that she’s no Ani DiFranco, but Jeez give the girl a break, isn’t it refreshing that somebody in the pop genre is trying to actually articulate her own feelings and not simply regurgitating an empty vision of  ‘girl power’ dreamt up by a team of  middle aged- mostly male, song-writers.

Despite her album being laced with pop gems, tonight it’s the slower numbers that are the real highlights, stripped of their studio polish Marina’s voice soars and is imbued with a melancholic quality that is both moving and mesmerising, a voice that combines power yet

fragility. If there’s anything that separates this young lady from her contemporaries it’s her singular ability to write affecting piano-led ballads of real emotional depth. ‘Obsessions’, Numb’, ‘Rootless’ and one of the best songs in recent years ‘Iam Not A Robot’ all hint at just what the future may hold for Marina as her songwriting matures and she continues to develop her ideas and opinions.  The show finishes with the inevitable shrieks of ‘cuckoo ’ from the audience as  Marina performs a rousing version of ‘Mowglis Road’ and when people reluctantly vacate the venue they leave with smiles as wide as the Mersey plastered on their faces.  Tonight’s show demonstrated that Marina is true a diamond, she’s sparkling brighter than ever and one cannot help but feel there’s so much more to come!