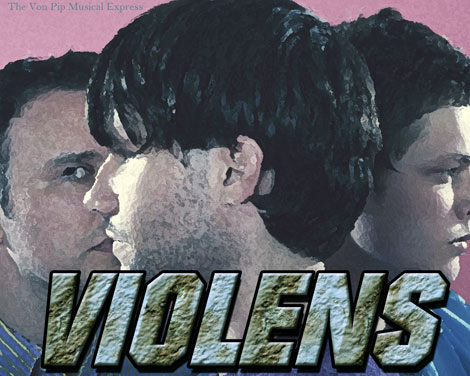 ‘He Got the Girl (Marine Girls cover)‘By Violens -Free Download.

“If I can make it there, I’ll make it anywhere” sang Old Blue eyes in his famous homage to New York, and after visiting the place for the first time recently I can see exactly what he means!  NYC can be somewhat overwhelming and the inexperienced traveller may be forgiven for thinking they’ve inadvertently been diverted to  ‘Shutter Island’ upon first arriving in Manhattan.  Nothing is quite as it seems, your waitress for example, is really a Broadway star in waiting, your Taxi driver the new Steinbeck and your hotel receptionist America’s next top model, ( I alas, remained a twa*t! )   But the Big Apple has always been a magnet for creative types, attracting them like moths to a flame, however the problem  remains, how do you ‘make it there?’ How do you get heard above the noise?

Violins lynch pin Jorge Elbrect moved from Miami to New York to study art at Cooper Union and admits that the city sometimes makes him feel like “I should  be wearing earplugs all day.” But Violens (pronounced Vy-lenz)  are a band who have been steadily making themselves heard due to the quality of the music they produce. In October 2008 they released a self-titled EP and toured Europe and the US with the likes of MGMT, Grizzly Bear, White Lies and Handsome Furs. Good things come to those who wait and Violens’ self-released, self-recorded, self-produced, self mixed  debut album ‘Amoral’ has certainly been worth waiting for.

They have created a strange aural dreamscape, nostalgic, yet at the same time contemporary, it’s an album that throbs and undulates with an understated, meandering beauty and one which shifts direction more than once throwing the listener a number of curve balls.  At times you’re listening to a jaunty Teenage Fan Club daydream and suddenly, without warning, you find yourself pitched headlong into the eye of a sonic hurricane. The production is sharp, clean and polished but  never overbearing, submerging a number of songs in a hazy, shoegazy wash of sound, whilst others utilise 1980’s synth flourishes and 60’s psychedelia . Imagine XTC, the Psychedlic Furs , the Byrds and Sonic Youth with a touch of  David Lynch thrown in.  We had a quick word with Jorge asking the sort of derivative questions only we can ask. :)

VP:  First off the inevitable, how did the band come together question and what’s the reason for the collective name?

Jorge : Iddo and I have known each other for years and I asked him to help me harmonize vocals for some songs I had been working on. We met Myles a little more than a year ago and got along instantly. Now all three of us write music and sing/harmonize together. Phonetically, the name came from a memory of Alejandro Jodorowski’s pronunciation of the word “violence” in an interview I saw in college. He said: “I like violence, I LOVE violence. And I hate the idiot who says “Aahh, I am scared of that image.” That memory morphed into the idea of blending the words “violence” and “violins” as this fit the idea for the band well.

VP:  There’s also a dream like quality running through the album, with a sinister undertow. What sorts of themes interest you as a songwriter?

Jorge : There aren’t any particular themes that interest us. The lyrics come from a sort of a subconscious place, as a lot of the song melodies and production ideas do.

VP: Was it a difficult task to get your album finished, self produced and released?

Jorge : Yes, it was.  It certainly took a long time!

VP: You’ve toured with some pretty well known acts in the last couple of years , what would you say has been your favourite experience thus far ?

Jorge : Definitely this last tour with MGMT because it was really fun to watch them play their new songs every night and their crowds were amazingly supportive

VP: What are your plans for the remainder of the year?

Jorge : Touring and making a video, and of course working on music all the time as well.

VP: Imagine there’s a gun to your head and you HAVE to pick just two albums which you consider to be the most influential…what would you say they are?

VP:   What are the best and worst aspects of touring?

Jorge : The best:  Definitely a fun show playing for an awesome group of people

The worst: is when equipment doesn’t work

“Are You Still In The Illusion? (Home Recording)” By Violens