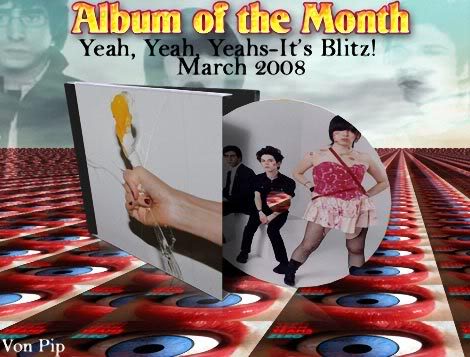 While many once cutting edge indie guitar bands of the noughties have disbanded or lost the plot by going for a smoother often over-produced sound, the Yeah Yeah Yeah’s continue to go from strength to strength as their dazzling throbber of a new album – It’s Blitz – clearly demonstrates.

It’s high energy New York Art Rock at its best mixing the down and dirty tones of their debut Fever to Tell LP with the (slightly) more melodic – yet still true to themselves – follow up, Show Your Bones.

Okay, it’s been done before at ‘difficult third album’ stage but the addition of synths for this offering proves to be the coup de grace and more than just a nod to the New 80s/Little Boots/La Roux movement as they smartly propel the band forward augmenting their cool rather than dragging them down Retro Road.

The opener, Zero, quite rightly is the single exuding a typical combination of rock rawness and swerving tunefulness that so suit Karen O’s vocals. As with the rest of the tracks on the album, never has the band – which also includes Brian Chase on drums and Nick Zinner on guitarist/keyboards – sounded so together.

The shimmering choppy rhythm synonymous with many YYYs tracks is no more evident than on Heads Will Roll while Soft Shock is indeed numbingly just that and is notable particularly for it swelling, welling climax.

You wouldn’t bat an eyelid if song number three, Skeletons – electronic bagpipes to a backdrop of military marching rhythms – popped out of the soundtrack of the classic 1983 film, Local Hero.

And just to show that the trio have not forgotten their proud punk roots, Dull Life is a piercing drum and guitar dominated track. Similarly the grinding rollicking Shame and Fortune would just as comfortably sit on the debut Fever album.

But contrasts are strong throughout It’s Blitz so it’s no surprise that the next tune, Runaway, is a moody melodic piece that begins with tinkling keyboards before transforming into a pseudo-power balled.

Yes, disco and dance are here too; Dragon Queen spins and twirls as the guitar once again is pushed more to the fore and you can imagine ABC or Friendly Fires  hiding somewhere in the shadows.

Ironically Hysteric is anything but – a lovely hum along song that could just as well have been on Show Your Bones. Dig that cute whistling outro too that highlights the attention to detail given to the whole production.

The haunting Little Shadow would only add to the eeriness if it was introduced into a Hollywood horror blockbuster while, at the other end of the spectrum, Faces – the bonus track – is pure and simple irresistible bouncy pop.

So there you have it. You won’t be track-hopping when listening to this one as there is not a duff one on the album. Like the singer’s surname it’s a complete and rounded work even down to the simplistically stylish smashed egg cover pic (whatever happened to great LP covers?).

‘Show Your Bones’ was the NME runner-up album of the year in 2006 and, like their first, received world-wide critical acclaim. Sales levels were very impressive but not quite equal to the expectations that followed such excellent reviews, peaking at no 7 in the UK album chart and no. 11 on Stateside.

But perhaps this latest musical masterpiece will finally establish the Yeah Yeah Yeahs as serious contenders for one of the top bands in the world both inside and outside the indie arena.