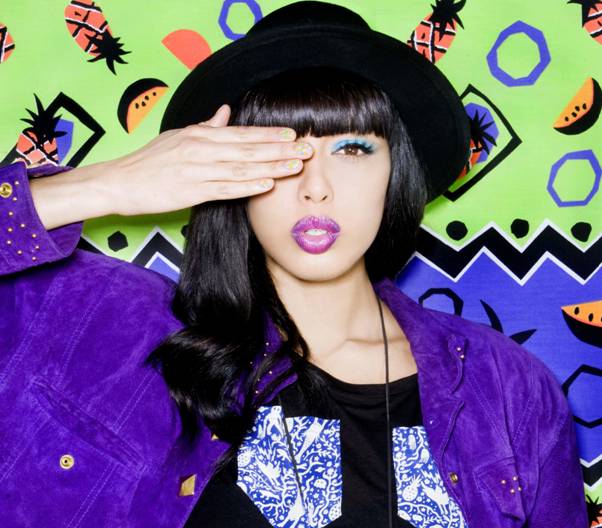 There’s been baaaaarely  a squeak from us about Liverpool’s hotly tipped, harmony drenched, psych folk, dream pop trio Stealing Sheep, but don’t ewe woolly we aim to set things straight and stoically resist resorting to infantile puns about sheep. They’ve recently uploaded an evocative new video for their track “I am The Rain” which is a bit M. Night Shyamalan’s “the Village”  meets “the Wicker Man” as well as recording a quite stunning session for  Marc [when did that beard appear] Riley’s 6 music show.

Here’s a new video from the Good Dangers who offer some sage advice to Chandler, Monica Joey, Rachael and Phoebe with their track “DFYF” – “Don’t F**k You Friends”

New York’s Devin is set to release his debut album ‘Romancing’ on April and this  single‘Masochist’ demonstrates his fusion of garage punk and rockabilly to create a rip roaring ride that sounds rather like a young amphetamine fulled Van Morrisson’s take on Jerry Lee Lewis. Pretty feakin awesome all in all.

If you’re gonna name yourself after a Wilfred Owen poem or a World War I campaign one would imagine you won’t be singing about happy clappy Saturday Night disco dancing whilst waving glow sticks. Thankfully  Spring Offensive don’t , instead you get literate, angular indie that has the sort of understated gloomy beauty that one imagines would appeal to the likes of Wild Beasts fans. But not Rebecca Blacks. Here’s their new video.

Marina And The Diamonds

Marina has continued to confound and confuse us of late, on one hand railing against the emptiness of being a pop star, and on the other seemingly determined to pursue that very route. She  of course could say she’s trying to subvert the genre from the inside à la Lady Ga- Ga, an artist who seems to be the touchstone for many young pop singers and is oft heard spouting incongruous pseudo intellectual bollocks about reinventing pop music (ie/ “there’s nothing more provocative than taking a genre that everybody who’s cool hates – and then making it cool.” Let us know when you start eh petal ? )  Ga-Ga is of course as  empty as Jeremy Clarkeson’s withered, flaccid little scrotum, unless you’re called Caitlin , but we digress.

When Marina released ” Radioactive” we weren’t particularly enamoured, “Homewrecker” was better but appeared a tad self consciously wacky, almost as if living up to Guardian journalist Alexis Petridis’ description of her – ” you get the impression that ­Diamandis couldn’t tell you where the nearest cash point is without crossing her eyes, blowing a raspberry and doing quote marks with her fingers every other word.”  However “Primadonna” is everything a good pop tune should be save for one thing – the heavy-handed, bombastic  production which  detracts from the melody and vocal.

However the acoustic video version of the same song is a much more satisfying affair and takes Marina’s  music back to it’s roots, reminding us why we fell for songs such as “Obsessions” and “I Am Not A Robot.” Her new album ‘Electra Heart’ is out on April 30th  which we hope will see her mix a few big commercial pop beasts (to keep the label happy) with songs that are perhaps not quite so full on, which is where we feel she excels.

Another song about friends and a tune that starts off sounding rather like a generic pop song and then morphs into something much more interesting.  It features a huge twisting 80’s synth riff and a fine set of lungs that conjures up a kind of Pat Bentar meets Ladyhawke on the set of a John Hughes movie type vibe.

Cinnamon Girl is Camilla Roholm a young Danish female artist who moved to London to study performance at the back end of her teens. She writes, records and produces all her own material.

Free download of this track is avilable over at Bandcamp.com