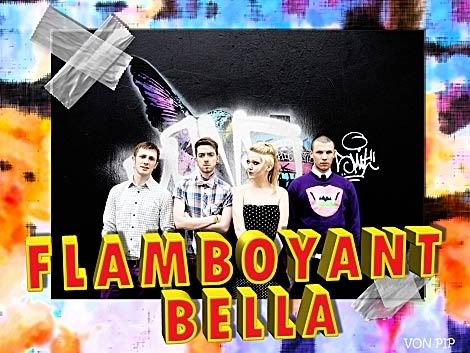 Flamboyant Bella? What sort of a name is that? It sounds like the sort of appellation  Perez Hilton would bestow on  his pet Chihuahua, or  perhaps it  calls to mind that burlesque dancer from Madam Jo-Jo’s, you know, the one who made love to you, and only you,  with her eyes … erm not that I’d know anything about that sort of thing!!  In reality Flamboyant Bella are a four piece musical outfit from Hitchin who have racked up over 1.5m hits on their MySpace page and have also topped the site’s unsigned chart.  Inevitably there will be comparisons made to the Kate / Lilly school of pop, due in no small part to singer Flo’s vocal delivery,(altough vocals are shared with James ) and  this in turn may well provoke the sort of reaction oft displayed when folk are confronted with a jar of Marmite. But if you like the idea of Kate Nash fronting the Primitives on a sugar rush  and have a sense of fun then “Flambo” (as their fans call them) may be right up your musical street. It’s great summery pop music.  A word of warning though kids, Flamboyant Bella’s songs more often than not contain some reference to sex, booze, boozy sex and sexy booze.  We feel a moral duty as a blog with a social conscience, to point out that binge drinking is responsible for all of society’s ills, so forget global warming, terrorism, poverty and MP’s expenses, having a pint is the real enemy within.   We also feel duty bound to point out that unprotected sex can have terrifying consequences – children for example.

Rather fittingly  Flamboyant Bella do produce pop that’s as catchy as Chlamydia ( minus unpleasant side effects) and show me a teenager that isn’t preoccupied  with close encounters of the drunken kind and  I’ll show you a  young Conservative.  Such predilections are all part of the normal rights of passage and of course it’s not the destination, it’s the journey that matters. So worry not about the dissolute state of this young bands collective soul, they’ll be fine and in time, excess and giddiness will be replaced by temperance and responsibility. In fact society has the perfect antidote to curb such rampant unfettered fun, it’s an institution that has been around for many years, it’s called “marriage”. ;)

We had a chat to Flamboyant Bella’s  Flo, which was a erm,  gas!

VP: How did the band get together?

Flo: Well, the bassist, Mitch, and drummer, Elliot, met in their parent’s cells, as they’re brothers. And Elliot’s been good friends with James for years. They found me, in a hairdressers and it clicked from then on.

VP:  Was it always an ambition to be involved in music?

Flo: I think it’s everyone’s dream to get to be in a band. But personally, yes. We’ve all done music for years now, so we’re very lucky!

VP: “Flamboyant Bella”?? Where did the name come from is it a person? A burlesque artist? A state of mind?

Flo: We nicked it out of a newspaper headline chronicle thing. It’s some bird from New York or somewhere.

VP:  What have you released thus far?

Flo: We first released ‘Touch’ as a single. It was attached to a Frisbee which we still sell today as it works so well. We then released our song ‘Absolutely Wankered’ but just for free for everyone, and now we’ve just released ‘Abbi’ which has done us proud, especially radio-wise.

VP: Would you care to share the strangest thing you’ve done when “Absolutely Wankered”

Flo: Ooft! Umm.. Err.. We have spitting fights in Travelodge’s when on the road?

VP:  What have you found to be the most surprising/weirdest aspect of being in a band?

Flo: Some great kids in Newcastle and a lovely lady from Brazil have got tattoos of either our artwork or lyrics. MADNESS!!!!

VP: Who are your musical heroes?

Flo: Mine is a singer by the name of Inara George. She sings in a group called The Bird and the Bee. She’s very pretty and has a lovely voice so I love her. I know James adores Blondie. She’s such an icon for sure!!

VP:  If Simon Cowell mysteriously disappeared, would anybody really care ?


Flo: I would. I think he’s genius. Some kid cut out a picture of his smiling face from a newspaper, at a gig in Southampton and gave it to me. I kept it for weeks… Then he disappeared… and I DID care!

VP:  What would you say are your worst habits?

Flo: The boys suffer from terrible flatulence. To be honest, we all fart on each other.