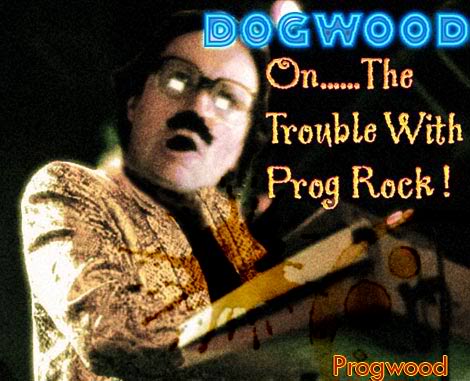 When I were a young buck, strutting my C&A suit down Preston Precinct sidestepping the suedeheads, bootboys and northern soul patrol, I would sometimes stumble upon another sect.  This lot went round in Army surplus great coats, flared jeans and turtle neck sweaters.  They would be reading Carlos Castaneda or Tolkien and under their arm would be a selection of long-players bearing bewildering names such as Hatfield and The North, Blodwyn Pig, Barclay James Harvest and Argent.

Such lethargy, mumbled vowels and body odour I had never come across and when they did occasion themselves to speak they would introduce themselves as ‘Gandalf’ or ‘Elfrud Orcslayer of Blackburn’ who was really Kevin Burns from down my street.

This was Prog Rock and during the dark ages of the early to mid seventies, a bunch of middle class university educated goons single-handedly attempted to rip music away from the grubby working class hands where it belongs and take it to some country pile owned by Lord and Lady Daddy and Mummy.  Never before had the country faced such a class threat and it was down to me, Dogwood, to sound the clarion call to storm the Bastille of Uriah Heep, dismantle the outer defences of Can, lay siege to the battlements of Yes and finally slay the imp known as Wakeman.  I am the destroyer of Prog Rock and I accept your muted admiration.

Now I’m getting a little carried away with myself so let’s start at the beginning.  Like many an innocent I was enchanted by ‘I Believe In Father Christmas’ by Greg Lake.  Now, there was a time when I actually DID believe in Father Christmas but that’s when I were a lad and would get a Lonnie Donnigan 78 in my stocking along with an oxo cube, some fishing line and a cobnut.  When I bought said Greg Lake record I was beyond believing but I liked the tune and spent many an evening making out with my Norwegian girlfriend at the time – Agnes – as it played.  Like many other innocent fools I then made a mental leap – if I like this effort by Greg Lake then maybe I would like the efforts of Emerson Lake and Palmer or ELP as my fellow radio jock at Dark Satanic Mills (a seventies Lancastrian community radio station) Fido Lomax would enthuse.  Well I went and bought an ELP LP and at the end of it all I was a brooding mass of Anglo-Saxon vengeance hell-bent on taking an invasion force and sailing the Topographic Ocean to assault the heartland of what was known as ‘Prog Rock’.

It’s easy now to get confused and wonder why such harmless noodlings would be enough to illicit such rage within me when there were other wordly problems such as the Oil Crisis, the 7 Day Week and Sir Robert Charlton’s troubled tenure as player-manager of my beloved Preston North End.  One of my friends Sandra-Joyce who tends towards the more hippy side of the spectrum would doubtless find nothing more wonderful than the prospect of stumbling in a Forest clearing, discovering a secret Jethro Tull gig and then throwing off her clothes in the frenzy of a Prog Rock ‘happening’.  That was the seventies, you could hardly fail to walk head-first into a bunch of would be Druids doing the ‘Bump’ to Pink Floyd in the middle of the local woods whilst out on a Sunday Ramble.

Whilst we tried to retain what little sense there was of seventies society by gathering round the old goggle-box to watch ‘The Brothers’, whole tribes of long-haired gadabouts were swaying in fields to the Solistic chants of the likes of Genesis.  Everywhere I looked, I saw a country in the grip of madness, at any time the Soviets might invade and what would be our response?  A slightly disinterested glance from a bunch of Sociology students hunting for Magic Mushroom while listening to Yes on their Dancettes in their Snowdonian Tepees.

No amount of Pete Murray or Gordon Honeycomb could seem to jolt a minutes worth of common sense into these bearded dolts, and the blokes weren’t much better either.  I went to a Dinner Party hosted by a friend who was big in carpet underlay in the Black Country and was surprised that his erstwhile loyalty to Ambrose Slade had been replaced by a devotion to Mike Bloody Oldfield.  We had to work our way  through our Prawn cocktail starter, a steak and crinkle cut chips  maincourse, and Arctic Roll for afters listening to some twerp saying things like ‘electric guitar – slightly distorted’ or ‘Oboe – with the reed removed’.  An evening of good food but an aural wankathon is the best way to describe that night.

Time spent trying to write odes to the Misty Mountain or Path to Gondor seemed to pre-occupy seventies musicians and we ended going back to some mythical medieval landscape where Lutes were making a comeback and codpieces mandatory wear.

Just as this plague of flaccid thinking threatened to overcome Britain, Punk Rock happened and like the Barbarians spotting a bloated Rome ripe for the taking, they set about making a corpse of Prog Rock.  The new order were harsh, Stalinist in their thinking and straight in the trouser department – but it was enough to puncture the Led Zeppelin and send it burning to the ground.

So there you are.  The trouble with Prog Rock is…it’s crap.