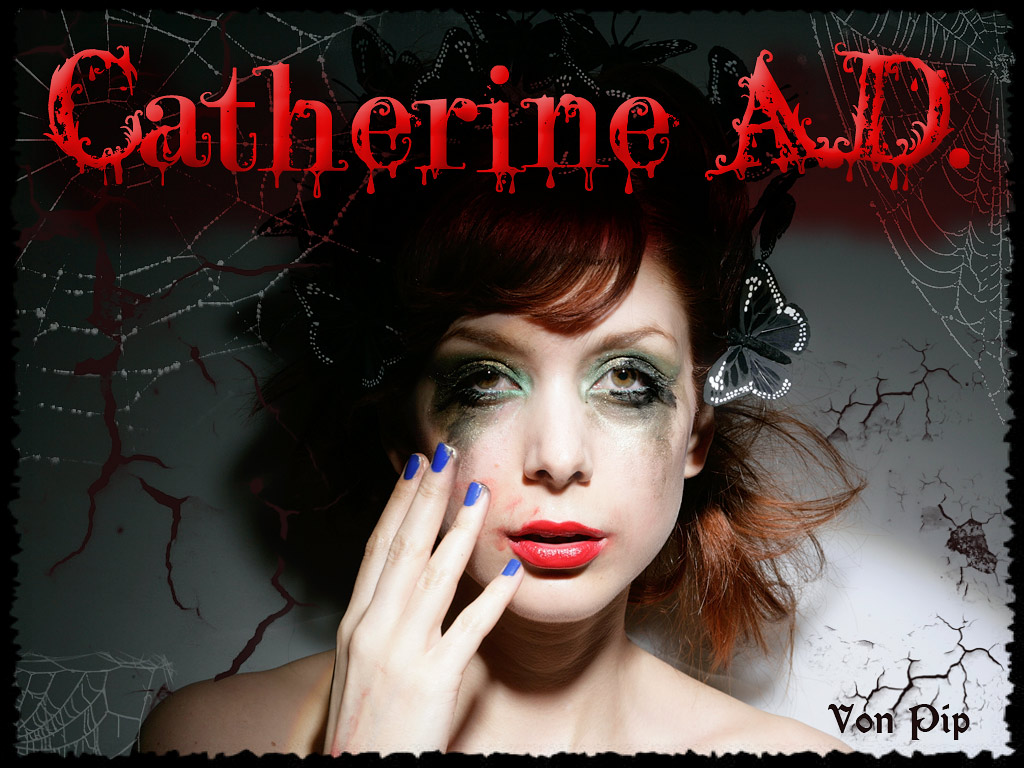 “If Kate Bush died and went to hell, she might sound like Catherine A.D. …” Now that’s a description to get your attention isn’t it?   Catherine A.D. looks and sounds like a fallen angel trapped for eternity within a snow globe fashioned by Tim Burton and her voice could well haunt your dreams in 2009.  Strangely such a talent may not have been developed fully had it not been for an accident in her first week at university, her first big break so to speak.  Unfortunately she fell down some stairs breaking her back, ribs and shattering her long held dreams of becoming a dancer. But from broken dreams and broken bones came a new direction, whilst recuperating Catherine decided to teach herself to play the piano, and not one to do things by half, she totally immersed herself in a world of literature and music, switching to study two degrees simultaneously whilst also mastering “the art of heavy drinking”

Whilst studying Catherine became an up market busker playing the piano in the lobby of the Hilton hotel and upon completing her university education she was invited to collaborate alongside Nitin Sawhney for the grand re-opening of the Royal Festival Hall in the summer of 2007.  She subsequently became one of the Emerging Artists in Residence at the Southbank Centre.  Catherine has  oft been compared to Kate Bush and Tori Amos whilst  Courtney Love characterised her voice as “‘gorgeous sick beautiful…”, which one can assume is slacker speak for “ Ruddy marvelous”. Her music and vocals  could be described as being the bridge between the gothic noir world of  Nick Cave ‘s nightmares, the sensual kookiness of Regina Spektor and the gentle siren allure of Sia “‘like pirate radio for the heartbroken’.

The public will  soon be able to experience the Catherine AD effect with the release of her debut EP  ‘Carry Your Heart’ and they too will be  lost in  this sweet, euphonious voice, as she relates tales of heartbreak and despair, which paradoxically instill  hope, because you know that somebody else has  also experienced her own  “dark night of the soul.”  Catherine A.D. has been there and now she’s sending out “satellites out to every girl who might be dying a slow death in Suburbia, nowheresville,” Her pain is our  gain; she knows how we feel, because she feels it too. She is far more than  merely young loves undertaker however,  for within the heartbreak there lies hope, and through the darkness, glitters a heart that is full of desire, empathy and passion.

As well as the  epic title track, the EP also features a one (wo)man-band re-working of The Magnetic Fields track ‘The Book of Love’ which once again showcases her fabulous voice. The  “Carry Your Heart EP” is released on February 16th 2009 as a limited edition of 500 ribbon-wrapped packages,  the artwork also includes a guide to making an origami dove. ‘Japanese custom says that you need to fold 1000 paper cranes and then you have a wish granted’ she says, ‘ so with the EP I should be halfway to a wish… or something! ‘says Catherine……….Surely the other half of anybody’s wish would be an interview with  the VPME? No?

VP:  Ok,  let’s hit the ground running with a barrage of questions !You’re described as a songwriter and multi-instrumentalist, which instruments do you play,  you took  took up music after a serious accident,  what happened and was music something you’d always been interested in?

CATHERINE: The guitar and piano are my main songwriting instruments but I have been known to be drunk in charge of a lapsteel, banjo, accordion, melodica, drumkit…. I am officially only qualified to play the flute but have since forgotten everything I ever learnt about music theory although my right ear seems to remember something about triads sometimes… I’ve always played music, even before the accident I was playing in youth orchestras and singing harmony in stairwells. Sometimes fate intervenes to  redirect your dreams though and I had to abandon Swan Lake for the Pixies but it wasn’t so much a change of route as redirecting the same energies into something that was already a huge part of my life. I have nicer looking feet because of it. This is no bad thing.

VP: Your voice has been likened to “a lake of black honey” and ‘a gothic mermaid version of the grim reaper ‘, do you feel in terms of your song writing, you like to explore the slightly  darker side of life ?

CATHERINE: I think that has been what came naturally in my first impulses to write songs but, like life itself, not all my songs are doom and gloom. I think I was just going through a particularly dark period when i began exploring songwriting and I am always drawn to the extremes but I’m just as attracted to writing things that are really anthemic and pull you through the darker times.

VP: There have also been comparisons to the likes of  Kate Bush and Tori Amos, who would you say your major influences are?

CATHERINE: I do, of course, have huge admiration for Kate Bush and I would like to think that I share alot of her ambitiousness in terms of arrangements and a theatrical approach to song but my major influences are probably more Nick Cave and the Carpenters. That pretty much sums up the contradictions in my sound! I also listen to a lot of Roxy Music and Fleetwood Mac looking for the key to the perfect song. I’ll let you know if I find it.

VP: You’re due to release your debut EP, produced by Bernard Butler, and are working on an album , how has that been progressing and when might the debut album surface ?

CATHERINE: The lead track on the EP is actually a Liam Howe production! (with the rest of the EP recorded by myself in my bedroom) but, yes, I am currently recording some tracks with Bernard for the album that will be emerging sometime this year…  It’s all going very well thank you, apart from this week when the pipes froze overnight and we had no water or heating in the whole studio. It was -8 outside but I managed to fix it. In fact, I am sure in fact that Bernard just keeps me around for my plumbing skills…

VP: Do you prefer playing live as opposed to studio work? Any upcoming live shows?

CATHERINE: I think the two are very different experiences. I love losing myself in a live context although when you’re playing two instruments this can sometimes be hard because you have to remember to play and where you are. The studio means you can explore things that you could never do without growing additional hands and feet, which i adore. I am a huge plug-in geek. You could probably just lock me in the studio for a month with food and water and I’d be in my element. The next live project I’m doing involves arranging two songs from scratch for a full orchestra  and gospel choir and playing them live at the Royal Festival Hall  in front of 2000 people. I am clearly in need of a hobby…

VP: What’s this I hear about being banned from The Trash Club?

CATHERINE: Erm, yes. All I will say is that it involved a staircase, some bad vodka, and a bad right hook.

VP: Aside from music, what are your major passions?

CATHERINE:I’m pretty much a one track/4-track mind girl. Although I do love cinema as well (Lynch mostly) but it’s usually to do with the musical experience as well. I’m a marathon book reader too but mostly to steal ideas/lines/styles for songs. Basically I have no life!

VP:  Was 2008 a good year for music? Did anybody grab your attention?

CATHERINE:I was still listening to Panda Bear’s Person Pitch for the whole of 2008, although I did love the Cut Copy record and Nick Cave’s latest which I play on repeat.

VP:Tell us something about yourself that nobody knows?

CATHERINE: My  ringtone is ‘Breaking Glass’ by David Bowie

VP: What was the first pop single you ever bought?

CATHERINE: “Confide in Me” by Kylie

VP: The five things that will make you happy in 2009 are:

Buy The “Carry Your Heart EP ”